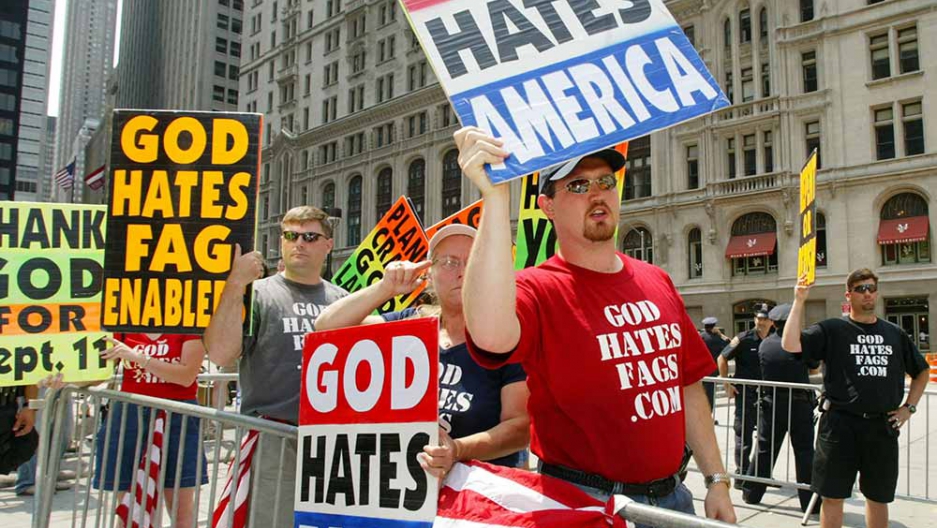 Members of the Westboro Baptist Church, from Topeka, Kansas, protest across the street from Ground Zero July 4, 2004 in New York City. The church members believe that because of homosexuals and America's rebellious and immoral conducts, God has brought on acts of terrorism as a way of punishing society.
Credit: Monika Graff
Share
#reactionDiv_gig_containerParent { display:none; }

Today has been a day that has tried the soul of a city.

In the hours since the two explosions rocked the streets of Boston, messages of love and support have saturated the internet — but these inspiring and compassionate posts were not universal.

In fact, the commentary streaming across the Twitter feed of the Westboro Baptist Church was both hostile and hateful.

The Westboro Baptist Church, based in Topeka, Kansas, is a small, virulently homophobic, anti-Semitic hate group that regularly stages protests or pickets institutions and individuals they think support homosexuality or otherwise subvert what they believe is God’s law.

WBC even protested the funerals of children who were slain in the horrific Newtown shootings this past December.

Given their history, perhaps it should come as no surprise that members of the Westboro Baptist Church have vowed to picket the funerals of those killed at the Boston Marathon today.

In one tweet, the church wrote, “God sent the Boston Marathon Bombs for the sin of Massachusetts passing same-sex marriage!”

Below is the complete collection of the day's comments made by the Westboro Baptist Church.