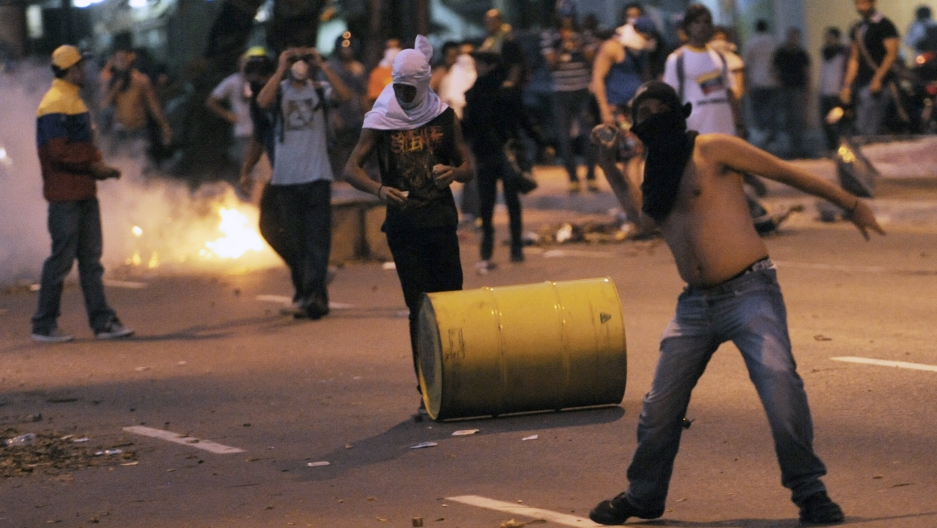 CARACAS, Venezuela — Violence broke out Monday in various parts of this South American country following the tightest presidential election in its recent history, with state media reporting seven people killed in the clashes.

Capriles and his beleaguered opposition are calling for a recount. The US government and the Organization of American States are urging Venezuela to respect his demand — international pressure that Venezuela's election authority chief slammed as being "interventionist."

Capriles' followers are also outraged. Protesters faced off against police in the capital city of Caracas as well as the states of Zulia in the northwest and Miranda in the north. Capriles is governor of the latter.

Analysts widely expected Maduro's win to be a shoo-in.

Yet even when polls began to show Maduro's once double-digit lead was shrinking, nobody could predict Hugo Chavez's chosen heir would scrape by with just 50.66 percent, about 235,000 more votes than Capriles took in, according to the Venezuela's electoral council.

Opposition candidate Capriles has refused to recognize the result, accusing the government of fraud even before the results became public.

“Until each vote is counted, fully audited, there’s an illegitimate president and that’s what we’re denouncing to the world,” Capriles tweeted Monday before repeating the sentiment in a televised speech.

This all is hitting Venezuela at a very difficult juncture. Despite being long expected, Chavez’s death last month from cancer at 58 — ending a 14-year rule — came as a shock to a nation that was so used to him; used to his theatrics, his fiery zeal, his ubiquity. The hope for his leftist "Chavismo" movement to endure has rested with 50-year-old Maduro, though commentators say the interim president's un-Chavez-like lack of charisma was underestimated by officials and perhaps Chavez himself.

Now, the opposition led by 40-year-old Capriles has a unique opportunity to stand shoulder to shoulder with government since Chavez was elected in 1998. The question is whether it can hold itself together enough to use this new-found weight, analysts say, and whether the government is strong enough, without its main man Chavez, to counter it.

Maduro has said he's open to a recount, and the electoral council has signaled it could happen, although this is unlikely to change the result. Rights groups and critics have long accused the country’s electoral council of a bias toward the Chavistas, with four of its five members openly partisan, according to critics.

An electoral council official told Bloomberg News that a recount of 15 million votes would take place but may take two weeks to carry out.

Capriles’ team claims to have a list of more than 3,200 election irregularities, from gunshots to illegal reopening of polling stations after their scheduled 6 p.m. closing time.

Internet users have posted images on social media networks that appear to show ballot boxes discarded in the streets.

These allegations could not immediately be independently verified but they continue to anger voters and drive a wedge even further into a divided Venezuela.

Caracas pollster Luis Vicente Leon said he expects "negotiation or conflict" after such a close race.

“The ability to govern is so fragile with this result," he said.

The opposition was prepared for a close count and possible accusations of fraud. They had set up numerous phone lines allowing voters to report on fraud.

Turnout was high at 78.71 percent of the country’s nearly 19 million registered voters, though some voters even expressed doubt on the day.

“I voted for Capriles but I’m not going to fool myself. Capriles will win but the electoral council won’t recognize it,” Luisa Fontiveros, a 28-year-old social worker, told GlobalPost immediately after voting in a wealthy area of Caracas.

State media published this disproportionate graph of the election results on its front page today, signaling what some observers saw as the Maduro government’s effort to sway public opinion in his favor.

Not convinced that graph used on state media website matches the numbers! (via @brianpablo10) vtv.gob.ve twitter.com/jammastergiris…

The post-election violence was a stark contrast with the celebrations that immediately followed the hotly contested vote.

“We’ve fought so hard alongside Chavez for 14 years and he’s passed us onto Maduro,” said Guillermo Trejo, 37, drinking beer outside the palace. “The margin is small, yes, but we won! The people chose Maduro.”

The turnout outside the palace was small compared with the massive crowds that gathered after Chavez’s re-election six months earlier, and passions seemed much less roused.

That may be telling of the bigger picture. The opposition has never come so close to winning against Chavez’s Bolivarian revolution — named after Latin American independence hero Simon Bolivar.

Chavez famously commanded a cult-like following, and after his death, his followers attempted to shift that religious fervor onto Maduro. The heir apparent even sought to stir zealous passions further, calling Chavez the “prophet of Christ on Earth,” and himself his "apostle."

As foreign minister for six years, Maduro could well be more diplomatic than Chavez — although, he often seemed to charm the most controversial allies, at least in Washington's eyes. He forged alliances with some of the world’s pariahs, including Syria, Iran, Belarus and Libya, mostly with an anti-American intent.

Maduro has vexed Washington further as acting president, expelling US diplomats and accusing the United States of plotting to destabilize Venezuela and even causing Chavez's cancer.

However, The New York Times reported Sunday that Maduro asked Organization of American States representative Bill Richardson, a former governor of New Mexico, to relay a message to Washington, hoping to improve relations. Richardson refused to confirm or deny this to GlobalPost.

It is not obvious where Venezuela would head under Maduro’s leadership.

What is certain is that he must think very carefully before his next move.

“Chavismo can no longer govern with any power,” said Carlos Romero, a political analyst at Caracas’ Central University of Venezuela. “Capriles is strengthened.”