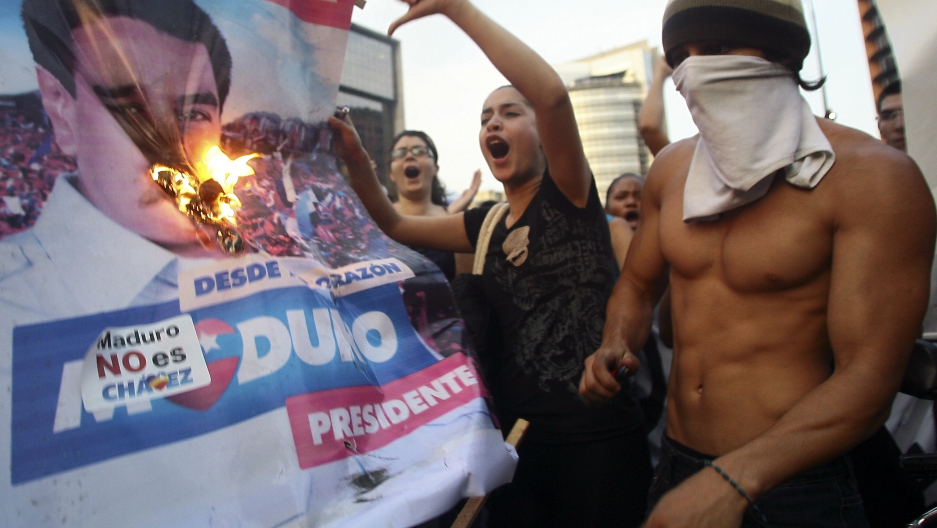 CARACAS, Venezuela — Seven people were killed and more than 60 injured in post-election street violence that erupted Monday in different Venezuelan cities Monday, according to the authorities.

Officials did not immediately reveal the victims' identities, but following the reports of fatalities on Tuesday, many in Caracas believed they were mostly protesters against disputed election winner Nicolas Maduro.

However, later Tuesday, reports said supporters of Maduro — the late Hugo Chavez's chosen heir — were among the victims. Foreign Minister Elias Jaua said a 45-year-old man was shot dead Monday night in the Caracas suburb of Baruta while demonstrating in support of Maduro, and a 44-year-old woman was also wounded, according to Agence France-Presse.

Clashes have taken place across the country since Sunday’s disputed election, which Maduro won by a hair, with the electoral council's tally handing him just 1.6 percentage points, or 235,000 votes, more than rival Henrique Capriles Radonski.

Capriles and the opposition cried fraud and are calling for a recount. International pressure has mounted after Washington and the Organization of American States urged Caracas to consider his request.

But causing further confusion around Venezuela's snap election, a council official told reporters the electoral body would consider a recount.

Just as Venezuelans are recovering from the dramatic death of their longtime leader, Hugo Chavez, many are reaching boiling point after the crucial vote to replace him.

On Monday, in Caracas’ Plaza Altamira, hundreds of opposition protesters gathered, angry that Maduro was being proclaimed the winner, despite the controversy.

Protesters hurled rocks and set fire to garbage bags and tires along an avenue off the plaza while dozens of military police stood at one end.

Every few minutes, motorcycle-riding security officials emerged from the police line and fired tear gas and occasionally rubber bullets into the crowd, causing protesters closest to the front line to retreat to the plaza itself.

“We have to protest,” said 24-year-old economics student Alejandro Blanco, as he walked toward the police line. “There’s an unelected president office. Maduro has been elected by a tiny margin. This is within the error margin in any other normal country.”

Farther back in the plaza, with some of the more mellow protesters, university professor Eneco Orua, 55, said: "We’re protesting for the right of all Venezuela. We don’t want violence, just a recount.”

The number of dead and injured is expected to rise as both Maduro and Capriles have called for protests across the country, even if they've pressed followers to do it peacefully.

“I call for the people to fight peacefully, to mobilize all over the country,” said Maduro hours after being proclaimed president in a ceremony on Monday, while the protests in Plaza Altamira took place.

Capriles called for peaceful protests at offices of the country’s electoral council, which critics say is biased toward the government.

“It's fraud,” said Mariusca Montes, 21, Chavez. “I have no confidence in the electoral council. They're entirely in the pockets of the government.”

Capriles insisted on Twitter in the wake of Monday’s violence that protests should remain peaceful.

Each party has blamed the other for the violence.

Vice President Jorge Arreaza wrote on Twitter that the country’s opposition had been “kidnapped” and was “generating” the violence.

But Maduro also raised a fist at another usual punching bag. "The [US] Embassy financed and led all these violent acts," Maduro said.

Both say they have proof of this but neither has offered any publicly.

They will have to be careful not to blow their democratic high ground, analysts say. The protests will remind Venezuelans of trouble in 2002, during a brief coup and oil strike, as well as in 2004’s recall referendum.

That violence went on for days and severely dented the oppositions’ democratic credentials.