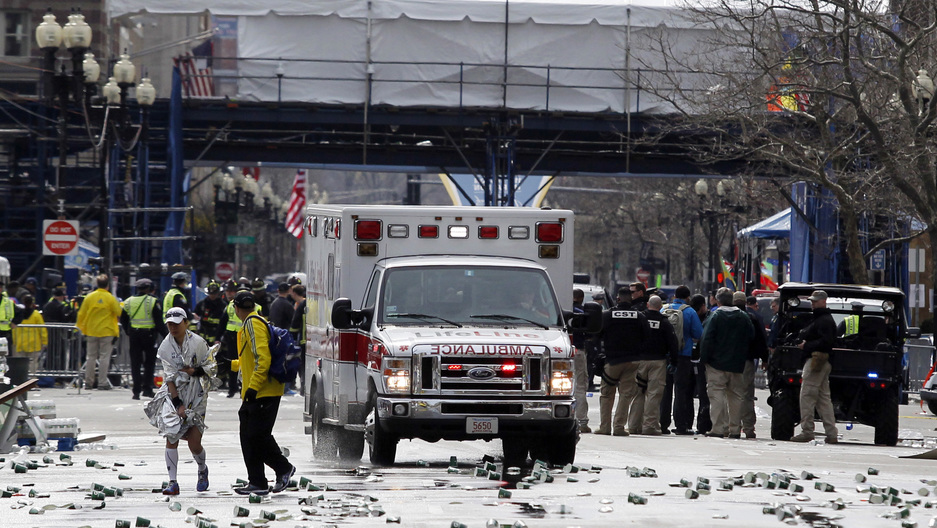 A runner is escorted from the scene after explosions at the 117th Boston Marathon in Boston, Mass., April 15, 2013. Two explosions hit as runners crossed the finish line. (Photo by Jessica Rinaldi/Reuters.)

At least three people died, scores were injured and a city was put on edge after two explosions, believed to be linked to terrorism, near the finish line of the Boston Marathon on Monday afternoon.

Various media reports have identified one of the deceased as an 8-year-old.

The explosions happened as finishers streamed across the finish line. In video of the explosion as it happened, at least one runner could be seen falling to the ground, while a cloud of smoke and debris engulfed the crowd of on-lookers. Various pictures circulating on social media showed victims with severed limbs, bad burns and other gruesome injuries. At several local hospitals, doctors were reportedly removing ball bearings from victims' bodies — an indication that the explosions were intentionally set to produce shrapnel.

The marathon's runners represented more than 100 countries and all 50 states.

The Federal Bureau of Investigation has taken the lead in what Special Agent In-Charge Richard DesLauriers was calling a criminal, and "potential terrorism" investigation. Law enforcement officials declined to confirm how many people were wounded, but the Boston Globe said it was at least 125. Boston Police Commissioner Ed Davis offered his sympathy to the victims and vowed to find out who was responsible for the attacks.

No matter how many devices were found, though, DesLauriers, Davis and Mass. Gov. Deval Patrick urged all Bostonians to be alert and attentive in the days ahead.

"I encourage everyone to have a heightened state of vigilance in the Boston area tonight and tomorrow," DesLauriers said.

"We ask everyone to be patient with that inconvenience for the time being. It's for the public's safety," he said.

Massachusetts General Hospital surgeon Dr. Peter Fagenholz said his hospital had seen 29 patients, eight of whom are still in critical condition. Fagenholz said the majority of injuries were to lower extremities, to bones, tissues and the vascular system.

A lot of the wounds, he said, were from shrapnel and required a number of amputations.

But Fagenholz said the hospital was prepared and was setup to handle the traumatic injuries within moments of being alerted.

"We're prepared for that type of situation. Within about five to 10 minutes, we had everything up and running," he said.

None of the injured treated as Mass General, at least, were runners. For many of the wounded, the recovery is just beginning. Fagenholz said many would require additional surgeries.

"A number of patients will require repeat operations tomorrow and serial operations over the next few days," he said.

The entire area around the blast scene has been cordoned off by the Massachusetts National Guard. The restrictions, Patrick said, will remain in place at least through Tuesday and perhaps beyond.

That cordon has displaced locals, as well as tourists. Several reports have emerged of local Boston residents taking in strangers forced from their homes or hotels. Patrick praised their willingness to help. He also urged Boston residents to report "suspicious packages, parcels, suspicious activity to law enforcement."

In a public statement, President Barack Obama offered his thoughts and prayers to victims and vowed to provide all necessary federal resources to help find out what happened.

"We will get to the bottom of this. We will find out who did this and why they did this. Any responsible individuals, any responsible groups, will feel the full weight of justice," he said.

Anyone with information that could help in the investigation is asked to call the Boston Police tips hotline at 1-800-494-TIPS or the FBI's hotline at 1-800-CALL-FBI. The FBI also specifically asked for photos and videos that spectators may have taken at the scene of the explosion shortly before or after the blast.

"No piece of information or detail is too small," the FBI said in a statement.

In addition to the FBI and Boston Police Department, the U.S. Bureau of Alcohol, Tobacco, Firearms and Explosives, the Massachusetts State Police as well as the Masschusetts National Guard, were assisting with the investigation.

In response to the explosion, law enforcement across the country were stepping up vigilance. The New York Police Department raised its alert level and deployed counter-terrorism vehicles to major landmarks in the city, including large hotels. Washington, D.C., officials also raised the security level, which included Secret Service officials tightening security around the White House. And in Los Angeles, the city activated its emergency operations center in response to the explosions in Boston.

Significantly, however, the U.S. Department of Homeland Security has not raised the alert level for other cities, and said there's no indication this incident is part of a larger attack.