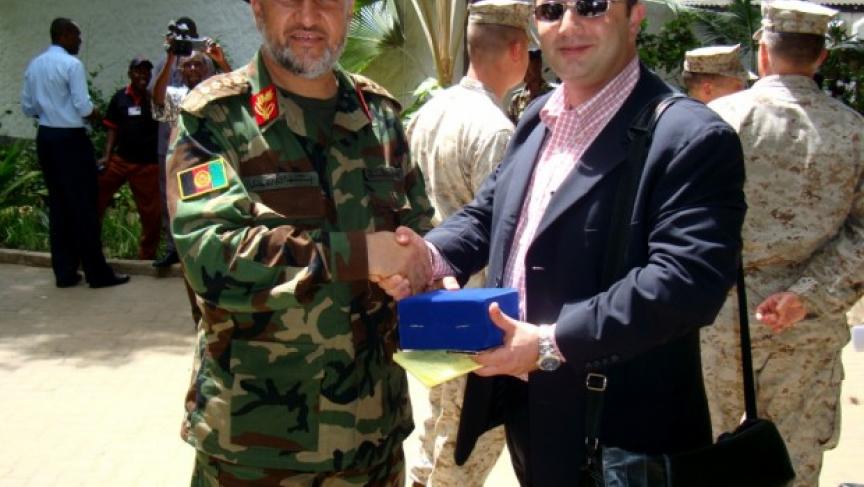 Iranian-American interpreter Amir Mohammed Estakhri, right, worked with Gen. Bismullah Kahn Mohammadi, during talks in Kenya in 2009, when Mohammadi was chief of the general staff for the Afghan National Army. (Photo by Amir Estakhri.)

The latest round of talks between the U.S. and its western allies and Iran over that country’s nuclear program ended last week without much progress in resolving the conflict.

Shortly after, Iran announced two new uranium mines and a processing plant. In the long-running war of bluster and provocation, one California man used to take pride in his role in helping facilitate communication between the two sides. But now, he may be facing a forced career change.

His name is Amir Mohammed Estakhri. He's a U.S. citizen born in Iran and a long-time San Diego resident. He's also fluent in Persian, or Farsi, the language spoken in Iran, and speaks Dari, the main language in Afghanistan. Estakhri is bicultural, well-educated and has international business experience.

After the Sept. 11, terrorist attacks, his skills were in demand. In 2005, the State Department’s Office of Language Services offered him a contract to work as an interpreter.

“Number one,” said Estakhri, “I’ve always been interested in politics and the implementation of policies.”

The Office of Language Services, known as LS, is the government’s official source of interpreters and translators–for the president, top cabinet members and State Department officials. It's been around since George Washington.

“Throughout the years, I accompanied the highest ranking Afghan military delegations in their visits across the United States to various military installations,” Estakhri said.

He also interpreted for top U.S. military leaders and officials in the Obama and Bush administrations.

Then Estakhri started to interpret for Iran’s president, Mahmoud Ahmadinejad, when he came to New York for U.N. conferences and appeared on CNN.

Estakhri says that CNN first hired him to interpret for Ahmadinejad in 2005. A State Department referral helped him get that job, he says. From then on, the work kept coming.

But Estakhri’s unusual work–interpreting for high-level officials from the U.S. and Iran started getting noticed. In February, the Wall Street Journal profiled Estakhri.

After that, he got a letter from the State Department. His services were no longer needed.

Estakhri isn't sure why they dropped him. Maybe to avoid any more media attention. Or perhaps U.S. officials voiced concerns about his loyalty.

A State Department spokesperson wouldn't comment for this story.

Estakhri said he never thought working for Iranian officials might be a problem.

Jamal Abdi, policy director of the Washington D.C.-based National Iranian-American Council, an advocacy group, says any interaction between the U.S. and Iran has almost been criminalized.

"The reality is the two sides need to be talking, that’s a big part of the problem that there is so much suspicion and there is no interaction between these two governments,” he said.

Abdi says he knows other interpreters who have worked for Iranian delegations to the U.S., and it doesn’t mean they're loyal to that government.

Shamus Sayed, vice president at the San Diego firm Interpreters Unlimited, points out that Estakhri was certified by the State Department’s Office of Language Services, which, according to the office’s own website, is the “gold standard for interpreting and translating.”

And professional interpreters follow a code of ethics, Sayed says, which includes things like being accurate and “ensuring the confidentiality of those you’re interpreting for and ... maintaining objectivity.”

Estakhri says he was always objective while on the job. But he does have clear opinions about U.S. relations with the Middle East, especially when it comes to the possibility of a U.S. attack on Iran.

“I don’t believe we have the heart left in us for another unprovoked war,” he said.

He adds that he would like to work again for the State Department, but is unsure whether that will happen. In the meantime, he will interpret for the Iranian finance minister when he comes to New York City later this month for a U.N. conference.

Estakhri is also planning a documentary about the Iranian people, and a book about everything he’s learned over the years, as he puts it, “talking for other people.”