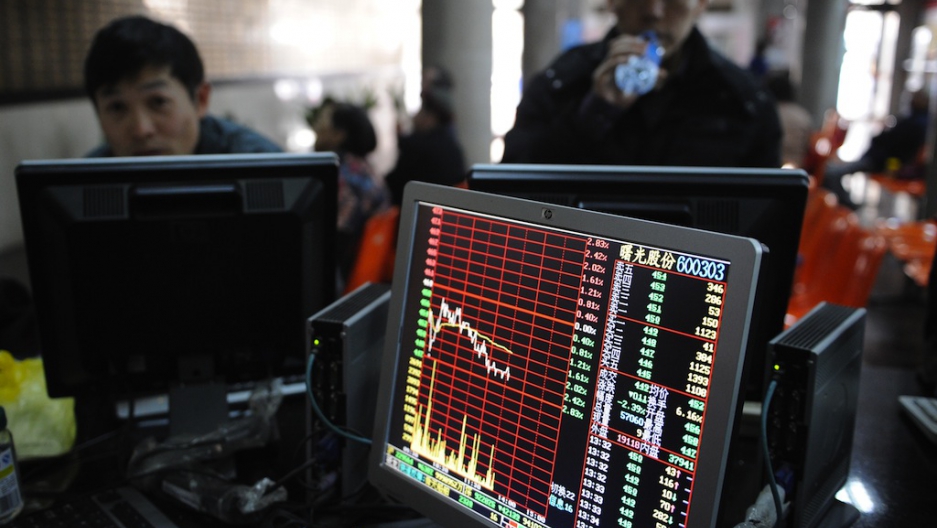 Investors look at stock prices on a screen at a securities exchange in Shanghai on March 4, 2013.
Credit: Peter Parks
Share

China's disappointing economic growth that came in at 7.7 percent in the first quarter, when the market was expecting an expansion of 8 percent, is leading to a loss of confidence in the outlook for the world's second largest economy.

When "exploding" credit growth is met by slower economic growth, this equates to a "dead end," he added on Twitter.

Despite stabilization in the global economy, support from the government's $157 billion infrastructure stimulus package unveiled in the second half of 2012 and strong credit issuance, China's economy has failed to live up to expectations in the first three months of the year, said experts.

Robust credit issuance — which rose by almost 60 percent in the first quarter from a year earlier — is no longer able to generate the same level of growth as it did compared to a decade ago, said analysts.

"It's shocking. The fact that growth slowed from the fourth quarter is concerning. One now has to question forecasts that assumed improvements in the global economy are going to translate into higher Chinese growth," said Tim Condon, head of research for Asia, ING, who had expected 8.1 percent growth for the first quarter.

"We have lost confidence in a robust recovery," added Alistair Thornton, senior China economist at IHS. "Another year of propped-up growth via state spending and a credit deluge would, we fear, push China dangerously close to proving Wen Jiabao correct — that the current economic model is 'unsustainable'."

In his final speech as Premier in March, Wen Jiabao said the country lacks a sustainable growth model, noting that in the domestic economy, "unbalanced, uncoordinated and unsustainable development remains a prominent problem."

Of the data released on Monday, economists say the most telling indicator of weakness in the economy is the deceleration in industrial production in March to 8.9 percent from an expected increase of over 10 percent. In August 2012 when hard landing fears were running high industrial production also grew at the same pace.

"While August 2012 proved the bottom for last year's downturn, we doubt March will be the turning-point for 2013, given macro policy has shifted to a tighter stance with renewed controls on the housing market, local government financing vehicles and wealth management products," Thornton said.

Confirming sluggish activity in the industrial sector, China's electricity consumption rose by 4.3 percent in the first quarter – much slower than the 6.8 percent seen in the same period last year.

Some experts including Vasu Menon, vice president of wealth management at OCBC, believe the lower-than-expected growth numbers could prompt the government to unveil fresh measures to support the economy.

"You might see modest action out of the authorities, they could come out with a mini stimulus package to kick start the economy. They want to see even distribution of growth, at the same time the government wants to make sure China doesn't fall off the cliff you need to ramp up domestic demand," Menon said.

ANZ's chief China economist Liu Li-gang expects GDP growth to pick up to around 8 percent in the second and third quarters. "With external side risks diminishing and domestic credit picking up strongly we should have an upturn in the second quarter."

More from our partners, CNBC:

CNBC: Does Carnival CEO Micky Arison have the mojo for his big week?

CNBC: Europe's austerity era could be coming to an end