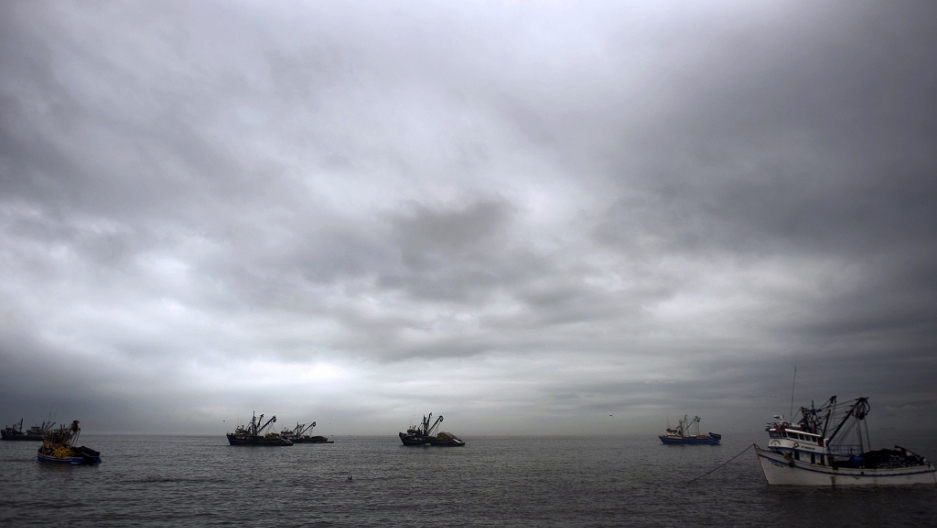 Fishing boats at anchor near a fish meal factory in Lima, Peru on Dec. 3, 2009.
Share

LIMA, Peru — Growing to about 5 inches on average, the Peruvian anchovy might seem an unlikely candidate for the title of the world’s mightiest fish.

Yet thriving in the Humboldt Current, the plankton-rich upwelling of Antarctic waters off South America’s Pacific coast, this diminutive, bright-silver forager gathers in vast shoals that have become the fishing industry's easiest pickings.

According to the United Nations’ Food and Agriculture Organization, the Peruvian anchovy is “the most heavily exploited fish in world history,” with annual catches in Chile and Peru sometimes totaling more than 9 million tons, two or three times the United States' catch of all fish species.

Most of that haul is caught in Peru, making the country the world’s top exporter of fish meal — the lucrative industry churns out feed to fatten up livestock from the US Midwest to China and, increasingly, to supply the rapidly expanding global fish-farming business.

Yet widespread corruption here means quotas and other safeguards intended to preserve what ought to be one of Peru’s greatest renewable resources are routinely flouted.

No wonder, then, that anchovy stocks appear to be on the decline. According to an official Peruvian report, there were 4.85 million tons of anchovies in Peru's waters in 2012 — a 28 percent drop from the average of the last 12 years.

The minimum population needed to ensure the species’ long-term survival, the report says, is 5.4 million tons.

More from GlobalPost: Sharks pushed to the edge of extinction by global overfishing

Because anchovies are a key part of the food chain, their decline is affecting many other, larger species in the Humboldt’s teeming waters.

Marcelo Perez, 57, fishes daily to supply his small restaurant in the surf resort of Punta Hermosa, just south of Peru's capital city of Lima. He says catches of species such as sole and bass have declined dramatically over his 35 years in the business.

In the 1980s, when Perez checked his 250-foot driftnets after leaving them out overnight, he would usually discover between 100 and 200 pounds of fish. Now he finds 20 to 100 pounds — or often nothing. “The sea is different now,” he says. “You have to work harder to get less.”

Now, however, the government has decided enough is enough.

The Production Ministry has launched a crackdown on rampant corruption in the anchovy industry aimed at ensuring the long-term sustainability of the species over short-term profit.

First, it slashed the annual anchovy quota to just 734,000 tons.

Subsequent measures have included a ban on industrial fishing within 10 miles of the coast in northern and central Peru, and 7 miles in southern Peru, to protect the anchovies’ breeding grounds. Authorities have given permits to just 600 midsize boats to fish anchovy within 5 to 10 miles. Fines can amount to $3 million for some of the country’s largest fishing companies for catching baby anchovies.

“The Peruvian anchovy is in danger of disappearing,” warned President Ollanta Humala, as he justified the measures. “We recognize the irresponsibility and corruption of large companies that have pillaged the anchovy.”

Both the measures and the new combative tone from the government have received qualified support from environmentalists.

Carlos Yaipen-Llanos runs Orca, a Lima-based nonprofit dedicated to protecting marine mammals such as whales, dolphins and seals, many of which depend directly or indirectly on the anchovies. He told GlobalPost that the government needed to start thinking about saving the entire marine ecosystem rather than just individual species.

“It’s a good law [the 10 and 7 mile limits], and a major step in the right direction. But on its own it will not achieve much,” he said. “What we need is a policy that is about conservation rather than extraction.”

Marine biologist Patricia Majluf, a former deputy minister in charge of fisheries, added: “This law is a good first step but it needs resources.”

Those resources included everything from funding for more inspectors to GPS satellite tracking for boats to ensure that they do not enter anchovy breeding grounds nearer the shore.

Majluf’s support shows just how far the government has moved in recent months. Just last May, she had quit her government post in disgust at the failure to take on corruption and influential lobbying by Peru’s fishing industry.

But in emailed comments, Diego Cateriano, a manager at Peru’s second-largest fishing corporation, Copeinca, insisted that “there is no evidence” to blame overfishing for the drop in stocks. He suggested natural fluctuations as well as climate change could be the real causes.

Copeinca was fined earlier this year after one of its boats was caught with 406 tons of baby anchovy. Despite that, Cateriano insisted the principal offenders behind the anchovy’s decline are the unregulated, smaller fishing vessels that hug the shore.

Yaipen-Llanos accepts some of that explanation, saying that after years of unsustainable plunder, Peru’s largest anchovy companies have recently cleaned up their act, largely in response to demands from international fishmeal purchasers.

He also blamed the smaller boats, saying that many of the new generation of fishermen come from the Andes and elsewhere and have a “hostile, aggressive attitude towards the sea” and its creatures, in particular dolphins.

But Majluf, without letting small-scale fishermen off the hook, insisted that industrial fishing — which takes some 80 percent of Peru’s annual catch — is the principal culprit threatening stocks.

“The industrial fishing sector is an extremely powerful lobby, with lots of money. If you believe them, they are never to blame,” she said. “All their talk of sustainability is marketing. They have yet to prove, with actions, that they actually mean it.”

But, if the government consistently enforces law and order on the high seas, ensuring the future of Peruvian anchovy stocks may no longer be up to the fishing industry.