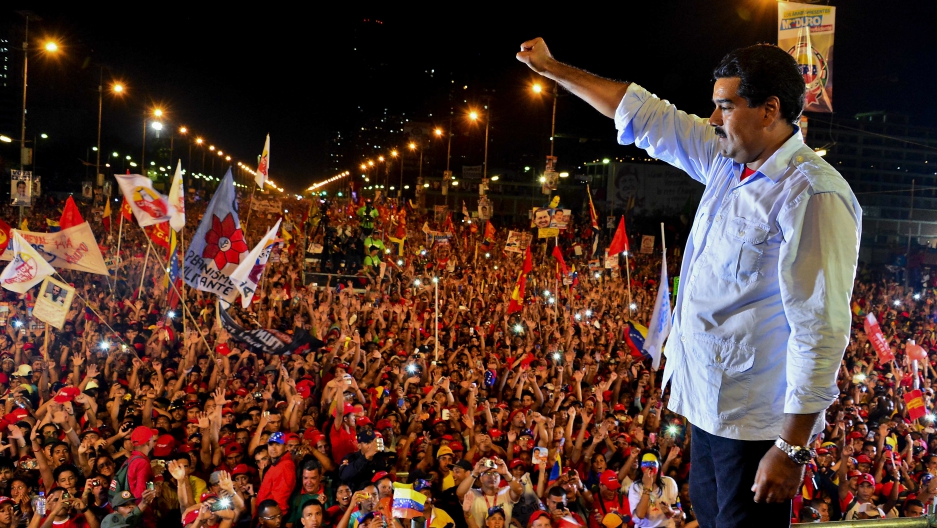 SABANETA, Venezuela — Flor Figueredo sits on a bench outside her small house in this tiny village, in Venezuela’s vast savanna known as Los Llanos. The 67-year-old has lived in the same house all her life, and she remembers, half a century ago, a young Hugo Chavez running around the streets outside.

Across the road stood the small mud hut in which the late President Chavez grew up with elder brother Adan under the supervision of their grandmother. There was no refrigerator, running water or indoor bathroom.

With tears in her eyes, Figueredo tells GlobalPost of her sadness at death last month of Chavez, at age 58. “He left a great legacy,” she says.

“It’ll be at least 100 years until a person like Hugo Chavez returns.”

Venezuelans are heading to the polls Sunday to pick a president for the second time in five months. Chavez’s chosen heir, acting President Nicolas Maduro, 50, is widely predicted to beat Henrique Capriles Radonski, the 40-year-old state governor who lost to Chavez in October’s vote.

“Maduro isn’t Chavez,” Figueredo admits, “but with the help of the people, he’ll continue the revolution.”

All are in agreement that he’s not the fiery, charismatic Chavez, the former army lieutenant colonel who led oil-rich Venezuela for 14 years.

But Maduro, a former bus driver and union leader who rose the ranks of government to vice president, has gone through somersaults — even calling himself the “son of Chavez” — to appear a natural surrogate to carry on leading the Chavista movement.

Maduro has invoked the name of the socialist leader more than 7,000 times, according to the website Madurodice.com (meaning Maduro says).

There also have been some surreal, if not supernatural, moments.

Maduro referred to Chavez as the “prophet of Christ on Earth,” adding that he may have had a hand in nudging Jesus to choose a Latin American pope.

Maduro’s attacks on the opposition have also stunned many. He labeled them “heirs of Hitler,” comparing their treatment of Cuban doctors here to the Nazis’ persecution of the Jews.

In a lighter dabbling with surrealism, Maduro made the sounds of a bird chirping and flapping its wings, saying his late mentor had appeared to him as a small bird. “It sang and I responded with a song and the bird took flight, circled around once and then flew away,” he said. “I felt the spirit and blessings of Comandante Chavez.”

Opposition politicians and followers derided this, while those on the side of the government defended Maduro.

“Everyone has their own beliefs. You have yours and I have mine,” said Luz Marina Ospina, 50, sitting in a Maduro campaign office in Sabaneta, just around the corner from Figueredo’s house and the primary school that Chavez attended.

Rather than forget what many considered a gaffe, Maduro plodded on, even adopting a bird motif in rallies. Just before he began his final campaign speech in front of tens of thousands of red-clad supporters in Caracas on Thursday night, dozens of small birds were released into the crowd and Maduro carefully placed one on his shoulder.

It was a histrionic act worthy of Hugo Chavez.

During his speech, Maduro showed a video of Chavez naming him as his heir.

“This video,” wrote Caracas pollster Luis Vicente Leon on Twitter, “is without doubt the centerpiece of Maduro’s campaign closure today.”

Capriles’ campaign, meanwhile, has struggled to woo voters from a deceased but immortalized candidate — and separate the new man from the idolized legend. Frequently at public events and news conferences Capriles refers to Maduro as “Nicolas,” points to the cameras and says, “you are not Chavez.”

He then proceeds to blame the administration for the country’s ills.

More from GlobalPost: Inside the war room of Venezuela's underdog

His tactic appears to be making some impact. After weeks of successive double-digit gaps between the candidates in opinion polls, a new survey by Datanalisis shows Maduro's lead narrowing to 7.2 percentage points.

In the city of Barinas — just an hour's drive from Sabaneta where Chavez grew up — Capriles appears to have won some converts.

Angel Sanchez, a 60-year-old farmer, watches friends play dominoes. He would vote for Chavez if he were alive today, but he says on Sunday he'll opt for Capriles.

“Chavez understood this country. He was a tremendous political force,” Sanchez says, but he reckons the Comandante failed to pass on certain qualities to his protege. “Maduro isn’t smart enough to govern this country.”

Both campaigns have been tireless.

It's actually Capriles' third election campaign in half a year after he also ran to retain his seat as governor of Miranda, Venezuela's second-largest state, in December's regional elections, and it shows.

“I’m breaking my back for Venezuela!” Capriles screamed at one rally, showing how hard he had been working in recent months, adding that his heart was “bursting with emotion.”

But there’s some deja vu in the air in Caracas.

The two weeks before Sunday’s vote have been filled with the same marches, songs and often slogans of last year’s election campaign — which Chavez won by a margin of 11 percentage points against Capriles.

Whoever wins will face the dire economic situation left by Chavez. Inflation is at one of the highest rates in the region; there's a severe shortage of dollars and basic products. The murder rate is comparable to war zones such as Baghdad. And it’s getting worse.

This could cause Maduro problems as he lacks the charisma that allowed Chavez to hold things together, at least in the eyes of supporters.

“In six months, Maduro is going to be in trouble because he is very different from Chavez,” said Leon. “He is not Chavez.”

Six months may be too late for the opposition, which is expected to fall apart if Capriles takes another beating in Sunday’s vote. It usually does.