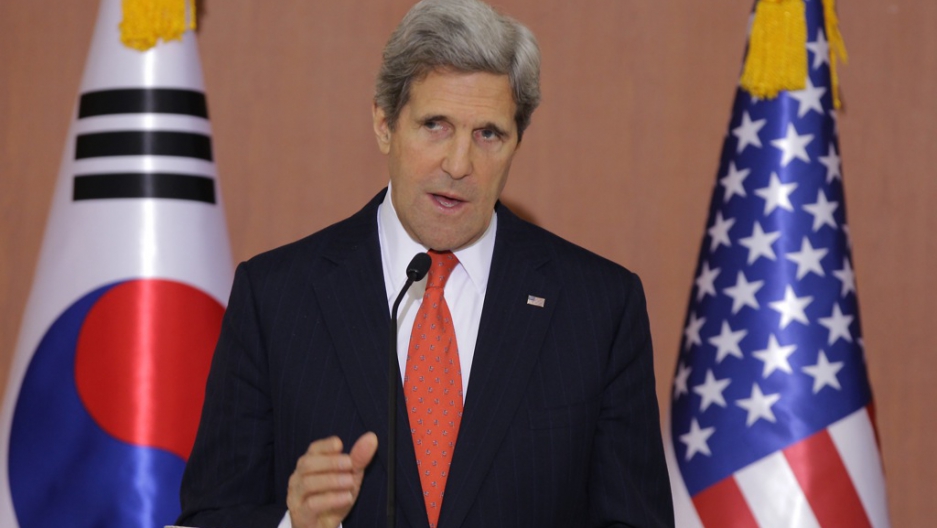 Launching a missile would be "a huge mistake" for North Korea, US Secretary of State John Kerry warned today.

Speaking from Seoul in South Korea, Kerry declared: "We are all united in the fact that North Korea will not be accepted as a nuclear power."

If North Korean leader Kim Jong Un carries out his threats to order a strike on South Korean and US targets, Kerry said, "it will be a provocative and unwanted act that will raise people's temperature.

Kerry's remarks come amidst increasingly belligerent words from North Korean officials against South Korea, the US and Japan.

Reports claim that North Korean officials have warned that Tokyo, not Seoul, would be the first target of their nuclear weapons.

It is believed that Japan has been on naval alert since the heated rhetoric emanating from Pyongyang last week.

More from GlobalPost: Who pays for North Korea's mind games?

Kerry called North Korea's recent rhetoric "unacceptable by any standards," but downplayed fears that the country was in a position to make good on the worst of its threats.

Despite a Pentagon report that concluded North Korea likely had the ability to place a nuclear warhead on a ballistic missile, Kerry said it would be "inaccurate" to suggest that the country had a "working and tested" weapon.

The report, cited at a congressional hearing yesterday, acknowledged that the reliability of any such weapon would be "low," while South Korea's Defense Ministry said it was "still doubtful" that North Korea had mastered the technology at all.

In any case, North Korea is not capable of reaching the US mainland with a nuclear missile, according to Defense Secretary Chuck Hagel – though the fact that it claims to be working toward that possibility is enough to make it "a very dangerous situation," Hagel said.

President Barack Obama, meanwhile, attempted to defuse the tension. In his first public remarks on the crisis, he yesterday urged North Korea "to end the kind of belligerent approach that they've been taking and to try to lower temperatures."

Echoing those comments, Kerry today said that the US was "attempting to find a way for reasonableness to prevail," including backing dialogue between North and South Korea.

"We want to emphasize that the real goal should not be reinforcing the fact that we will defend our allies – which we will – but it should be emphasizing for everybody the possibilities of peace," he said.

From South Korea, Kerry is due to travel to China, where he will push the government to rein in its North Korean allies.

He will then head to Japan, which Pyongyang has also threatened to attack if, as Tokyo has said they will do, Japanese forces shoot down any North Korean missiles.