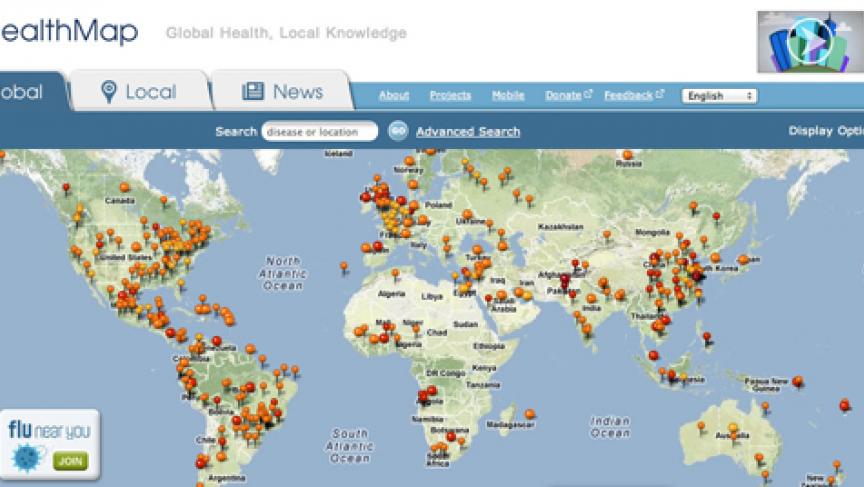 HealthMap is one of several digital tools that seeks to help people better use technology to diagnose disease outbreaks.

“This is HealthMap,” he said, displaying a website he helped create.

The home page shows a world map cluttered with markers.

“Each marker that you see on the map represents a particular location,” he said. “And I can click on one of those locations, and then I will see a listing of recent events in infectious disease that have happened for that location.”

“There’s some interesting information about the recent bird flu cases that have happened in China,” he said.

Freifeld says HealthMap serves as a “one-stop shop” for the latest news on infectious disease outbreaks around the world.

“Because we’re collecting the information together,” he said, “that can give public health officials kind of an early picture of what’s going on.”

And it is important to get information early when you are trying to stop a pandemic.

But how can users be sure that the information is accurate? That's a challenge for Internet-based efforts to track diseases.

Take, for example, a relatively new platform called MappyHealth, which listens in on Twitter conversations.

“(It) basically ingests tweets based on certain terms related to disease,” said Brian Norris, one of the creators of the platform. “And then we do analytics on those tweets on our platform.”

Those analytics look for trends. For instance, a sudden increase in people tweeting about cholera or measles might indicate an outbreak.

Norris says MappyHealth can serve as an early warning system.

“A good example of that would be this year’s flu season,” he said.

The platform recorded a spike in flu-related conversations as early as October, suggesting that the flu season had started earlier than expected.

This observation, he says, was later confirmed by more rigorous data from government health officials.

But Norris is quick to point out that not every spike is an outbreak. Consider a recent spike in Twitter conversations on pneumonia.

“Pneumonia saw a spike recently, on March 28, and then it tiered down, and then you see another sort of mini-spike after it, around the 30th,” he said.

Closer scrutiny of the content of the tweets revealed that people were not saying that they or their friends had pneumonia. Rather, they were tweeting about the recent illness of Nelson Mandela.

The case illustrates one of the main challenges of using social media to track disease outbreaks.

“If there’s an event happening in the news about illnesses that are taking place maybe halfway across the world, people will start to comment about that event,” said John Brownstein, a pediatrician at Harvard Medical School and one of the creators of HealthMap. “And so you might have difficulty separating what people are talking about in terms of themselves or commenting on that event.”

Other problems have cropped up with another cutting edge tool: Google Flu.

Google Flu analyzes how frequently people search for the word “flu” and related terms in Google. It uses that information to compute the percentage of people in a population who may have the flu. The tool is being used in 29 different countries and provides a near-real-time estimate of how bad a flu season may be.

Officials have found that it is mostly reliable, but last year, Google Flu’s estimates for peak flu in the U.S. over Christmas were almost double those of the US Centers for Disease Control and Prevention.

It is not clear why the estimates were so far off, but a spokesperson for Google says that researchers will update the model based on data from this past season.

Despite these problems, public health experts remain enthusiastic about these new internet-based tools.

Larry Madoff, an epidemiologist at Harvard, says tools like Google Flu will get refined with time, and they are already doing a lot of good.

“Use of these types of tools has helped to dramatically decrease the amount of time that it takes to discover an outbreak,” he said.

In fact Madoff and his colleagues recently conducted a study that supports that claim.

“Back in the 90s,” he said, “it took, on average, a month for an outbreak to occur and be reported publicly for the first time.”

Today, it takes about two weeks.

Madoff hopes that lag time will continue to shorten as disease surveillance on the Internet becomes even more sophisticated.