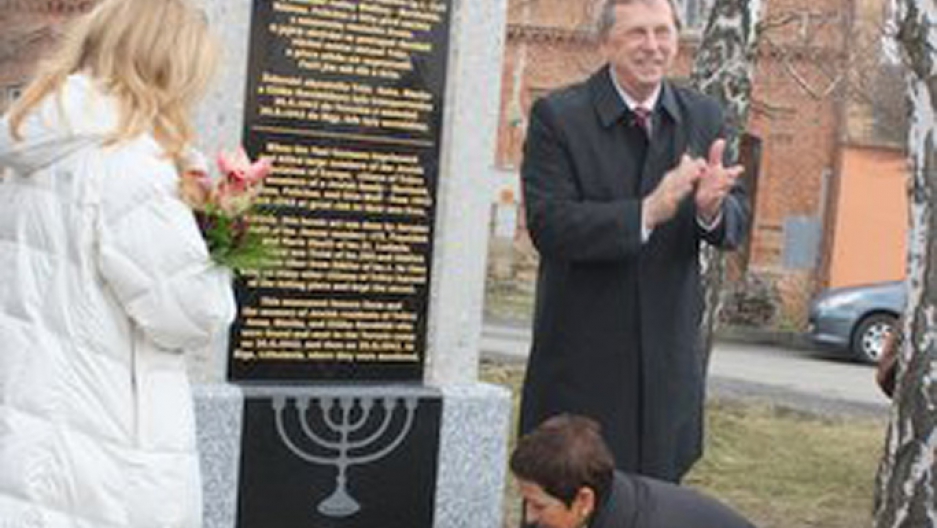 Eva Vavreckova, whose mother Felicitas survived three years of World War II hiding in the woods and other makeshift shelters, with the aid of the villagers of Trsice, lays flowers at the memorial honoring them. Joan E. Silber of the US Commission for the Preservation of America's Heritage Abroad and Czech Senator Martin Tesařík watch.
Credit: Bruce Konviser
Share

TRSICE, Czech Republic — A memorial unveiling, paying homage to six villagers who risked their lives during World War II to save a Jewish family — and to the whole village for keeping the secret — is the culmination of a five-year effort initiated by an American high school teacher.

At the height of World War II, when Jews and other minorities were being rounded up and taken to human slaughter houses, residents of Trsice, about 150 miles east of Prague, helped the Wolf family sidestep the Nazis' chain of concentration camps.

The harrowing plight of the Wolf family is well-documented because of a detailed diary kept by Otto Wolf, who was 15 when he, his older sister and their parents fled into a nearby forest in June, 1942.

Colleen Tambuscio, who teaches a course on the Holocaust at New Milford High School in northern New Jersey, has been leading students on a Holocaust study tour of Germany, the Czech Republic and Poland for more than a decade.

Part of the course reading includes excerpts of Wolf's diary. And five years ago during a tour stop in Olomouc, a regional hub, she realized that the Wolf's forested hideout must be nearby. Leaders of the local Jewish community helped locate the wooded site, and last year a monument was unveiled at the Wolf's hideaway.

The unveiling of this year's memorial in the village center Wednesday paid homage to the six individuals who risked their lives sheltering the Wolf family. In the 1990s the six were designated Righteous Among the Nations by the Yad Vashem Holocaust Memorial Museum in Jerusalem.

But it also honors the entire village, because over time the secret of the family's hiding trickled out, yet everyone kept the secret. And it also remembers the Wolf family.

“It's remarkable,” Tambuscio said, “that in this town there is a stone that not only honors the rescuers but is also marked with Jewish symbols. That is profound.”

Tambuscio put the cost of the memorial at about $12,000 and said it was jointly financed by American and Czech interests.

The US Commission for the Preservation of America's Heritage Abroad, which works through the US State Department, provided funding.

In 1942 the Wolf family, like virtually every other Jewish inhabitant of the former Czechoslovakia, received de facto deportation orders. With the borders effectively closed, ignoring the order would merely delay the inevitable knock on the door by the police.

Initially, the family was aided by a young suitor, enamored with their daughter. Jaroslav Zdaril — known as Slavek in Otto's diary — was madly in love with 22-year-old Felicitas, and he helped set up the family in their wooded hideaway beyond his orchard.

Walking through his field and directly into the woods enabled him to aid the Wolf family undetected. But as Felicitas spurned his romantic overtures, tensions increased, and over time his delivery of food, fuel and other essentials became more erratic.

After two years the family was desperate. The attic of their former housekeeper, Marie Zboril, offered a firm roof over their heads plus a steady food supply and electricity.

But almost from the start they were unsettled by Mrs. Zboril's husband Oldrich, who fearing the life-threatening consequences if they were found sheltering a Jewish family, wanted them out.

Their former dentist found them shelter in a barn of the Oher family, who were total strangers. But within weeks a roving battalion of Cossacks, fighting for the Nazis, came looking for partisans.

They raided the Oher property and took away Otto and Oldrich Oher, who were both deemed to be of fighting age. Unaware that Otto was even Jewish, both men were executed as part of a mass murder, shot in the head and then put into a barn that was set alight.

The raid compelled Felicitas and her parents Berthold and Ruzena to return to their wooded hideaway.

The weather that April was wretched, marked by unseasonably cold temperatures and perpetual rain, leaving its forested inhabitants muddied, chilled and unaware of Otto's fate.

Petr Papousek is chairman of the federation of Jewish communities in the Czech Republic. He sang a prayer at the unveiling and later reflected on its significance.