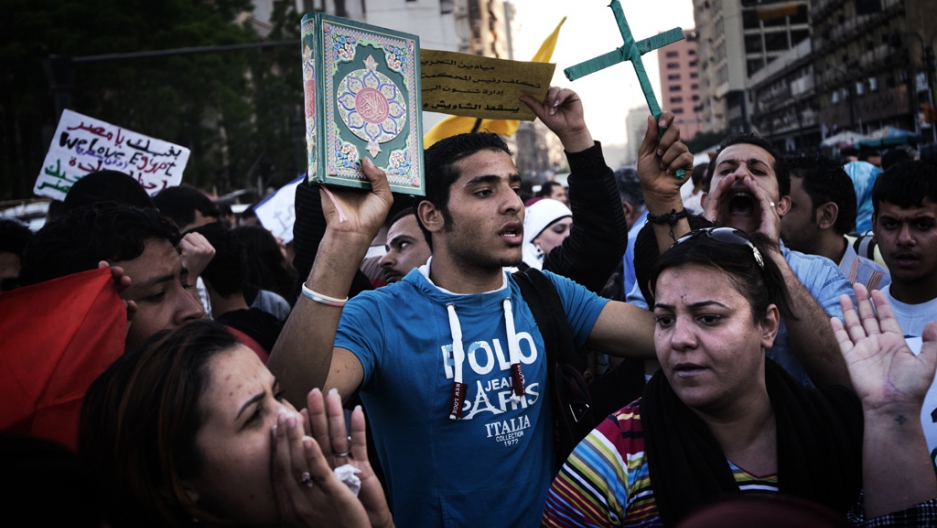 An Egyptian protestor holds the Koran and a cross as hundreds of Egyptians from different political opposition parties and different religions march towards St. Mark's Coptic Orthodox Cathedral in Abbasya to denounce sectarian violence and the Egyptian government on April 9, 2013 in Cairo. Egypt's Pope Tawadros II accused President Mohamed Morsi of "negligence" in his response to deadly clashes outside Cairo's Coptic cathedral, the worst sectarian crisis since he took power in June.
Credit: Gianluigi Guercia
Share

This is the fifth in a series of posts about dwindling Christian communities in the Middle East.

CAIRO — For 21-year-old Rojeh Reda, a Christian living in Cairo’s working-class district of Shubra, the recent rash of sectarian violence in Egypt feels like a movie he’s already watched.

He knows the script by heart now: Christians and Muslims clash, mostly Christians are killed, the government does nothing to help and the faint spark of change vanishes in a flash.

Since last Friday, eight people have been killed and dozens of others wounded in sectarian strife that began with a fight between a Christian and Muslim family outside of Cairo. On Sunday, an angry mob of Muslims threw firebombs and rocks at the Coptic cathedral in Cairo, leaving two people dead.

With a president who hails from the Muslim Brotherhood and a new constitution that critics say offers religious minorities, especially Copts, little to no protection, existential fear has pervaded Egypt’s Christian minority, who make up around 10 percent of the population.

On Tuesday, in his first direct criticism of President Mohammed Morsi, the new leader of Egypt’s Coptic Orthodox Church, Pope Tawadros II, lambasted the country’s Islamist president for his inept management of the recent violence. In a telephone interview on a local television program, Tawadros said Morsi’s handling of the crisis “comes under the category of negligence and poor assessment of events.” He and others have also chided the government for their recent talk on creating more committees and groups to deal with the issue, instead of taking real actions on the ground.

Father Makary Habib, Tawadros’ personal secretary, told the Turkish Anadolu News on Wednesday, “We demand the president to apply the law to everyone, ensure safety and security in the entire country, activate fully the principle of citizenship, amend religious discourse, and teach Coptic history in schools.”

The office of Morsi’s assistant for foreign relations and international cooperation issued a statement shortly after the pope’s comments, stressing that the “Egyptian presidency would like to affirm its full rejection of violence in all its forms…. The Egyptian state is seeking to overcome these phenomena that are alien to the Egyptian people through a number of legislative and security procedures that will address the different aspects of the problem.”

The statement added: “The presidency further stresses that it will not allow any attempts to divide the nation, incite sedition or drive a wedge among Egyptians under any pretense and that it is doing all it can to realize the sovereignty of law and hold the assailants accountable.”

The presidency’s decision to issue the statement via the foreign relations ministry has been the subject of critique among many who point to it as yet another example of the government’s failure to properly deal with the country’s systemic divides, their seeming interest only in hedging an international public relations crisis. Amid the cacophony, Egypt is seeking a possible increase to its $4.8 billion loan request from the International Monetary Fund.

As reflected in their statement, the Brotherhood has often regarded sectarian discord as nothing more than attempts by amorphous thugs or Mubarak-era remnants to halt and dismantle the revolution. Abdul Mawgoud Dardery, a former parliamentarian and spokesperson for the foreign relations committee of the Brotherhood’s Freedom and Justice Party, has repeatedly said, “We really don’t have these issues in Egypt…some conflict or tension is exaggerated by the media to divide Egypt, to ruin the revolution…these are old tactics used by the old regime.”

This week Dardery was in Istanbul, interviewing with local press, and praising the Turkish model. Meanwhile, Morsi took to Twitter on Wednesday night to request questions among Egypt’s youth.

“Ninety-nine percent of us don’t have Twitter, or even the internet,” he said, getting ready for work at an ice-cream shop 45-minutes from Cairo. “Whatever.”

Read parts one, two, three, and four of this series, about dwindling Christian communities in the Middle East.