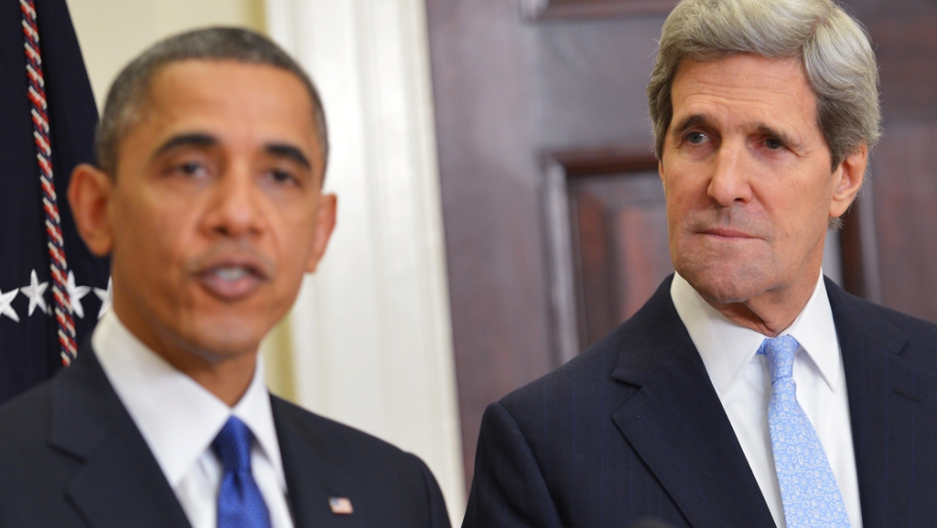 US Senator John Kerry D-MA (R) watches as US President Barack Obama announces Kerry as his choice for the next secretary of state on December 21, 2012 in the Roosevelt Room of the White House in Washington, DC.
Credit: MANDEL NGAN
Share

Just a few days ago, US Secretary of State John Kerry made a promising trip to Israel to rekindle Israeli-Palestinian peace talks.

By Tuesday, Kerry was already announcing he had held "very constructive talks" with both Israeli and Palestinian leaders, hopefully to pave the way one day for the two sides to talk directly with each other.

"Each of them made very serious and well-considered, constructive suggestions with respect to what the road forward might look like," Kerry told reporters on Tuesday.

Unfortunately, his attempt at peace talks appears to have floundered so far. A senior Israeli official told the country's media they weren't budging.

"There will be no response to any demand where the purpose [of the demand] is to supply appease [sic.] the Palestinians and make them come to the table," an unnamed Israeli senior official told Ynet.

"Ministers are unanimous over the decision of not giving in to any pre-condition. They present conditions in order to make the process of renewing direct talks difficult. There will be no gestures, especially not land withdrawals," the anonymous source added.

The reports came hours after Palestinians said they would only negotiate peace in exchange for “a clear formula” concerning borders and the release of detainees in Israeli jails, the Times of Israel reported.

Ha'aretz's diplomacy correspondent pointedly writes: "A senior Israeli official, who asked to remain anonymous due to the sensitivity of the subject, expressed considerable skepticism regarding Kerry's steps, and made cynical, slightly scornful comments regarding his attitude. 'Kerry believes that he can bring about the solution, the treaty and the salvation,' he said. 'He thinks that the conflict is primarily over territory … and that is wrong.'"

The bad news came as President Barack Obama's special envoy to the Middle East, Philip Gordon, is reportedly carrying out an intense series of under-the-radar meetings with high-level Israeli government officials. And it's 10 days before a planned visit to the country by US Defense Secretary Chuck Hagel.

GlobalPost's senior correspondent in Israel, Noga Tarnopolsky, says some skepticism is not surprising.

"There does seem to be fear in Jerusalem that Kerry somehow 'misunderstands' the principles at stake, and is trying to push a territorial and security-based solution," she said.

Washington's top diplomat is seen as seeking pragmatic steps forward "without taking into account issues important to the Israeli government that are much harder to quantify," she said, "such as the demand that the Palestinians recognize Israel as a Jewish homeland and the abandonment of the Palestinian demand for their refugees' right of return."

However, that's not so clear cut, she explained.

Just this week Tsippi Livni, the justice minister who's in charge of negotiations on the Israeli side, said recognition of Israel as a Jewish homeland is not a necessary precondition for negotiations.