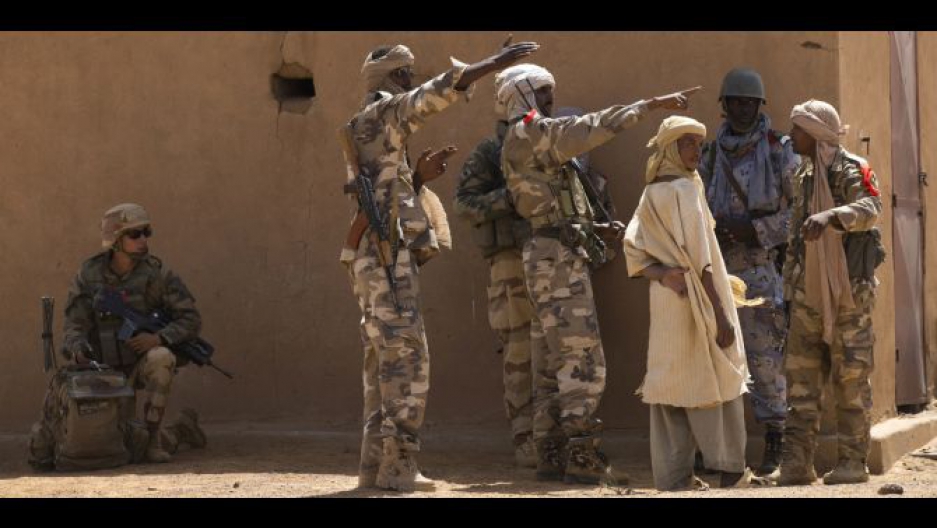 A Malian Special Force soldier and a French soldier question people during the Operation Gustav, a hunt for Islamist fighters in a valley in northern Mali and one of France's largest military operations during its three-month intervention in its former colony, on April 9, 2013.
Credit: Joel Saget
Share

NAIROBI, Kenya — For Western nations, wars in far off places like Mali and Somalia cannot be ignored, though they might wish they could.

US and European governments worry that Al Qaeda groups in Africa might threaten their citizens and interests — at home and abroad — and while France was willing to briefly intervene in Mali, most are wary of entrenching their own troops in potential quagmires on the continent.

Instead, regional authorities are applying a cooperative model that is growing in popularity throughout Africa. The idea is that African armies supply the soldiers and the West provides the rest. It’s something that J. Peter Pham, director of the Africa Center at the Atlantic Council, described as “the Holy Grail of African security.”

Last week, the first of 150 European Union military trainers began rebuilding Mali’s shambolic army. The trainers are part of a 550-strong EU force being deployed to back a UN-mandated African Union intervention force. The plan is for the African force, backed with Western funds and training, to replace France’s 4,000 troops now battling extremists in Mali’s northern deserts.

This strategy is by no means a guaranteed success. Westerners have tried to train Mali’s military before, most recently the United States. Since 2005, a US counter-terrorism training program operated in Mali, but with limited success. Al Qaeda groups expanded their kidnapping and smuggling operations, growing in strength, wealth and audacity, while corruption in the armed forces — like other Malian institutions — festered.

The initiative’s failure was made glaringly apparent in March 2012 when a US-trained captain led a group of army officers to overthrow the government. Amadou Sanogo appeared on state television to announce the coup wearing a US Marine Corps pin on his uniform.

Clues to doing it better might be found in Somalia, where internationally funded and trained African peacekeepers have notched remarkable successes against the Al Shabaab militant group, which boasts links to Al Qaeda.

When the first 1,700 African Union peacekeepers landed in Mogadishu in March 2007, they found no peace to keep. Confined to the airport, they were mortared daily.

But over time things improved and the rhetoric of “African solutions to African problems” appeared to gain merit. Most of Somalia’s cities and towns have been recaptured over the last 20 months and, last week, a road linking the capital to the key western town of Baidoa reopened. Life is even returning to war-wracked Mogadishu.

There are simple answers to why the African Union Mission in Somalia, known as AMISOM, is succeeding where so many others have failed: It has been willing to take casualties, and someone else is picking up the tab for salaries, equipment and arms.

Hundreds of millions of dollars have been poured into the African Union mission, along with regular shipments of assault rifles and other weaponry. Last month’s suspension of a UN arms embargo, in place since 1992, will make it easier still for the weapons to flow.

But six years of fighting have taken their toll. Casualty figures are not made public but diplomatic sources estimate that more than 600 African Union soldiers have been killed. On a single day in October 2011, more than 70 Burundian soldiers were massacred in a botched assault on an Al Shabaab stronghold. Their bloodied bodies were paraded through the streets in scenes reminiscent of the notorious Black Hawk Down episode of 1993.

At that time, it took just 18 body bags to convince Washington to pull its soldiers out, triggering the collapse of the UN peacekeeping mission there.

“AMISOM is very much perceived at the moment as a success. But that has come at a human cost that would have been unsustainable for any Western force or other peacekeeping mission,” said EJ Hogendoorn, deputy Africa program director at the International Crisis Group, a Brussels-based think tank. “They have been willing to be at the sharp end of the conflict.”

The African Union’s envoy to Somalia, Jerry Rawlings, a former president of Ghana, put AMISOM’s success down to the heavy involvement of states in the region that have a direct interest in seeing Al Shabaab defeated and Somalia’s chaos reined in.

“What we’re seeing here is a regional consensus, led by regional forces that have demonstrated the courage and the will to fight,” he told GlobalPost during a visit to Mogadishu last year.

But the consensus is wider than that. While some still argue the fight in Somalia is nothing more than a proxy war fought by African armies acting at the West’s behest, this view discounts local interests and involvement.

“African states are no longer automatons as they were once perceived where the West says do it and they follow orders,” Hogendoorn said. “It is a much more equal partnership.”

Ethiopia and Kenya sent their armies into neighboring Somalia for domestic concerns over the threat of terrorism, damage to their economies and the desire to secure borders. The decision won the backing of the United States and others because their interests were aligned, analysts said, not because Washington or London was the puppet master.

There are clear benefits too for the African governments that send their troops to fight in a war supported by the West, having others pay for their armies that, in most cases, have little to do domestically. Ugandan troops in Somalia earn 10 times their usual salary and come back better equipped, trained and fed than when they left.

“They gain training, equipment and combat experience and the civilian leadership gains a certain immunity against criticism,” Pham said.

Ugandan President Yoweri Museveni’s support for the African Union Mission in Somalia has won him some leeway when it comes to corruption, human rights abuses or dodgy elections.

The same goes for Ethiopia and even Kenya, where the former is maintaining stability in the disputed Sudanese region of Abyei and both are playing key roles in pacifying Somalia. Rwanda, which contributes heavily to the peacekeeping mission in Darfur, used its contribution as a political tool when — responding to Western criticism of its role in the uprising in neighboring Congo — threatened to pull its troops out.

From the perspective of the West, arms-length interventions offer a way to get the job done without Western soldiers dying in African wars. And with less public scrutiny, sharper tactics can be employed.

During a visit to Mogadishu last year, Augustine Mahiga, the UN’s top diplomat for Somalia, described AMISOM as a “peace enforcement mission.” AMISOM, he said, had “pushed its Chapter VII [peacekeeping] mandate to the maximum. This is warfare.”

In Somalia, foreign donors are increasingly looking to build a functioning Somali National Army that will, in time, take over security from AMISOM. In Mali, with the arrival or EU trainers, the hope is to do both simultaneously through the national army and the new African-led International Support Mission for Mali (AFISMA).

Until then, however, it is up to France and its army to keep the extremists at bay. Even as the trainers began work, France was launching a fresh offensive around the northern city of Gao, seeking to dislodge a militant hold on the region.