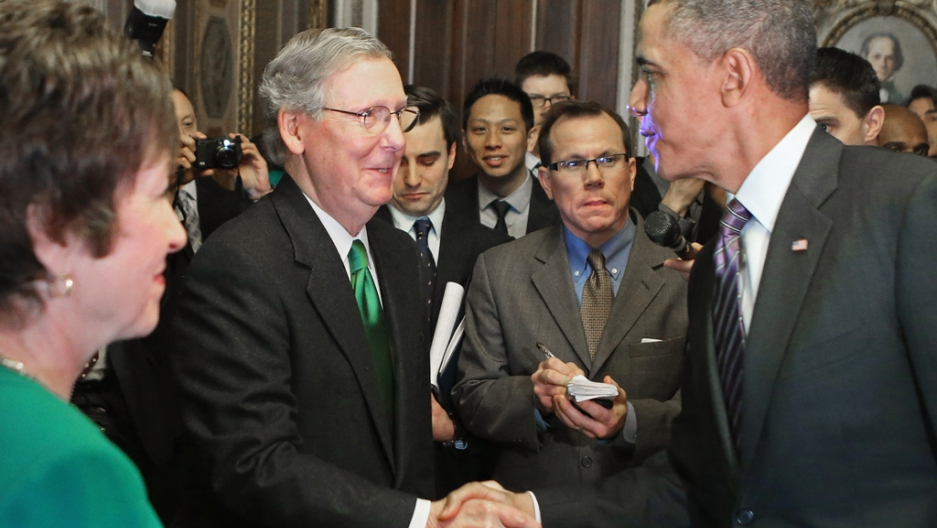 US President Barack Obama (R) is greeted by Senate Minority Leader Mitch McConnell (R-KY) (C) and Sen. Susan Collins (R-ME) as he arrives at the US Capitol for his third day of meetings with members of Congress on March 14, 2013 in Washington, DC. Obama met with Senate Republicans and House Democrats, with tax reform on the agenda.
Credit: Chip Somodevilla
Share

WASHINGTON — As the lights burn late and bright this week in American households striving to meet Monday’s federal income tax deadline, signs suggest it may be possible for America’s warring ideological tribes to agree on the first major reform in a generation of the overcomplicated, loophole-ridden and highly regressive tax system.

It’s hardly springtime for tax reform, mind you: the Republican and Democratic parties, by and large, still hold radically different visions of how taxation should be adjusted to fund government, halt (or at least slow) the accumulation of national debt, all while spurring economic growth, innovation and economic recovery.

But important voices on both sides of the American political divide appear to agree on one thing; something must be done to provide relief to middle and lower income families whose net worth has barely kept pace with inflation over the past three decades even as incomes for those at the top have rocketed skyward.

In the past several weeks, as much of the media has focused on fraught negotiations between Democrats and Republicans on the draconian budget cuts of the “sequester,” immigration reform, the emotional gun control debate and the looming deadline for raising the national debt ceiling, a dialogue between centrist members from both parties has created momentum for the first genuine overhaul of the US income tax system since 1986. Nothing could do more to address the long-term fiscal health of the country — as well as the solvency of the vast majority of its middle and low income households — than a comprehensive reform and simplification of the way the government raises revenues.

In part, this reflects tactical shifts in both parties. Republicans, having lost another election to Barack Obama, appear to be backing away from the obstructionist strategy embraced after he first came to office. Obama, meanwhile, has put some meager meat on the bones of his 2011 promise to consider reigning in the growth of popular entitlement programs like Medicaid and Social Security.

His 2014 budget would further raise taxes on top earners, in exchange for reduced payments to Medicare providers and lower cost-of-living adjustments paid to Social Security beneficiaries. This is all subject to Congressional approval, of course, but looks to be the start of bargaining over the “grand bargain” the hopes will reverse the exponential growth in inequality in America since the 1980s.

This week, the strongest signal yet of the kind of compromise that is in the works emerged from two influential lawmakers, Max Baucus, a Montana Democrat who heads the Senate Finance Committee, and Dave Camp, R-Mich., the chairman of the powerful House Ways and Means Committee. In a jointly written op-ed in the Wall Street Journal, they embraced the compromise Obama has suggested; in effect, restoring some “progressiveness” to the tax code by raising rates on the highest earners, particularly by ending the special treatment that professional investors get that allows them to pay on 15 percent on capital gains or dividend income.

Additionally, a reform of corporate taxes would lower rates to 28 percent from 35 percent, but close virtually all loopholes, effectively raising the amount of revenue brought in since so many large companies manage the game the current system with lobbyists and high-priced tax advisors.

The plan, the lawmakers wrote, will "look to close loopholes like those used by some lawyers and celebrities to avoid paying the payroll tax on much of their earnings … (and) make sure that companies can't avoid paying tax on income they earn in the US by pretending that they earned it in an overseas tax haven instead."

In spite of the hopeful talk, major fights loom. Some in both parties would like to limit deductions for charitable donations; others argue that the ability to write of mortgage interest on a primary residence has become a distorting factor – in effect, one of the causes of the housing bubble of the last decade – and should be phased out. Either would mobilize powerful interests against the proposed reform.

Democrats, meanwhile, will insist that another look be taken at top rates, citing the need to redress decades of lost ground suffered by middle and lower income families. The deal struck between President Obama and House Republicans at the New Year returned the top rate to 39.6 percent for families making over $450,000 – but this remains a long way behind top rates in most industrialized countries, including those like the UK (45 percent) which have decided to use tax policy to tackle the income disparities that have opened in recent decades, and Sweden (57 percent) where income inequality is the lowest in the industrialized world.

Some have gone further. France, in a move widely regarded as political grandstanding by economists, raised its top rate to 75 percent, prompting the actor Gerard Depardieu to renounce his passport and seek tax haven status in Russia. Threats of similar moves by major financial firms and millionaires followed rate rises in the UK, too, but so far the star of Green Card and other comedies appears to be more an exception than a rule. Studies indicate for all the hand wringing, few actually follow through on such threats.

As GlobalPost has revealed in our series, "The Great Divide," income inequality is hardly an American phenomenon. Over the past several decades, for reasons ranging from globalization, to immigration, to the collapse of communism, rising capacity in the emerging markets and the revolution in information technology, income inequality has increased in most modern, industrialized nations.

But the stagnation of middle- and lower-rung incomes in the United States stands out, with some of its metropolitan areas experiencing such divergence that they have more in common with the cities of Emerging Asia than places outwardly more similar — Berlin, Stockholm or Amsterdam, for instance. And it’s all a far cry from the neat, prosperous American communities of the immediate post-war era — a time remembered fondly, and somewhat wistfully, by many Americans today, as an age when hard work genuinely translated into prosperity, regardless of where, or whether, you went to college.

Those days are long gone.

Using the standard economic measure of income inequality known as the Gini coefficient, GlobalPost correspondents showed that many American cities now rank so poorly that they now have statistical doppelgangers in the emerging world — cities in countries just emerging from decades of dictatorship, dysfunction or worse whose income disparities precisely mirror those of American communities. Greenwich, Connecticut — one of the most prosperous places in America — is on par in terms of income inequality with Bangkok, Thailand, one of Asia’s least equitable societies. The oil town of Big Spring, Texas and Nigeria share disturbing similarities, and, ironically, so do the residents of Washington, DC and the capital city of the empire it supposedly vanquished, Moscow. The list goes on.

These comparisons revealed shocking similarities that raise disturbing questions about where US society and policy went wrong. How, an increasing number of people of both political persuasions are asking, did a nation where household income levels became more and more equal between 1946 and 1978 find itself with a population where income is distributed as unequally as it is in Turkey?

These disparities in household income, which saw the wealth of the top 20 percent of households grow by 89 percent from 1979 to 2011 while the middle and lower rungs barely kept up with inflation, were masked by stock market and real estate bubbles, plus an unprecedented opening of the credit spigot that gave middle and even lower class American households a false sense of security and material wealth.

But the 2008 financial crisis stripped away the distortions, revealing the true effects of the flattening of tax rates that began in the 1980s, plus the explosion in household borrowing.

As might be expected, Republicans and Democrats disagree on the prescriptions for reform. Some on the Left would prefer a heavily redistributive tax code even though studies indicate that risks economic stagnation. On the Right, some still cling to “trickle down” theory in spite of evidence that the economic activity created by the changes that began in the Reagan era, in fact, trickled up instead.

As such, there are a host of alternative plans floating around Washington besides the one centrists are hammering out.

Several Democrats continue to push for the repeal of the Bush tax cuts — which Obama’s signature in January made permanent — and imposition of an steeper tax on the highest income levels. Separate efforts to do the same in state legislatures from California to Maine to Missouri have passed, though some governors, including New Jersey’s Chris Christie, have vetoed these measures, arguing they will drive businesses out of state.

From the Right, there are ideologically charged plans verging on hare brained. For instance, so-called “fair tax,” supported by many Tea Party, would replace income tax with a very high sales tax of nearly 30 percent, an idea that would be a huge burden to low income families as well as a drag on the retail consumption that drives over 70 percent of US GDP.

A plan with more bipartisan support, though one with similarly dim political prospects, would create a Value-Added Tax that would be added to purchases of any luxury item — a system already in place in the European Union. Economists tend to like the idea because it targets voluntary purchases and also would collect when manufacturers sell products to retailers, raising more money than a conventional sales tax. But in spite some support from House Budget Chairman Paul Ryan, R-Wisc.., the taint of the EU probably makes this unpalatable even to moderate Republicans.

Economists point out that in the case of both the Fair Tax and the VAT, as well as the so-called “Flat Tax” that would simply impose a 17 percent income tax on all Americans, it seems unlikely enough revenue could be raised to fund government operations. While this may not bother the Tea Party, which often cites as one of its goals “starving the beast” of government, it’s not likely to win widespread support.

But that may not be the point. Tax reform in America has historically been a generational issue — so exhausting is the effort that once finished, no one wants to touch it again until virtually all living memory of the last effort has passed from memory — or at least congressional tenure. Given that fact, the existence of more radical, alternative plans may not be nearly as dangerous to reform prospects as the possibility that one or more such plan will gather just enough zealous support to derail the main enterprise.