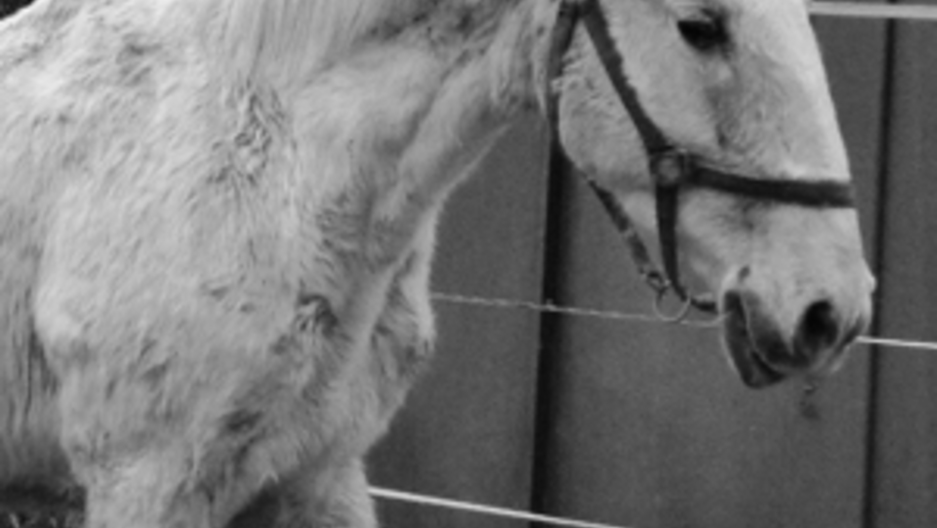 This mare, Katana, was found tethered to a tree in a Barcelona park, nearly dead. People can abandon horses so brazenly, Alcaraz says, because they're not committing a crime. It's only an infraction, and the fine is small.

Spain now says its economy will shrink more than expected this year, as banks struggle, the government slashes spending, and consumers spend less and less, especially on luxury items.

During Spain's boom years of the 1990s and 2000s, lots of people bought and bred horses. They were a status symbol, and fun to ride.

But with everyone cutting back, the horses are often the first to go. The problem, is where do they go?

At Miguel Reverte's riding school and stables outside Barcelona, young students lead their horses back to their stalls after class. About a third of Reverte's 100 stalls stand empty. He says there used to be a waiting list to board horses here.

"Fifteen years ago people lived well, had good paying jobs," he says. "So people bred and bought luxury items like horses. Now they can't get rid of them fast enough."

Some horses are just left at stables. Those would be the luckier ones. They have food, shelter, visits from the vet. Across Spain, thousands of cash strapped horse owners are just leaving their animals…anywhere.

"They leave them to die," says Aldo Alcaraz, a young Spaniard who takes in abandoned horses.  "Desperate owners will ditch them in some fenced off lot in an abandoned building or some old, unused factory. You can be sure it'll be somewhere where there's no food or water."

The Alcaraz family horse sanctuary, about an hour from Barcelona, is overflowing. As are many such refuges across Spain.

On a recent day Alcaraz's boney, scarred and limping horses feed quietly on a pile of hay in the main corral. Alcaraz says they try to find new homes for these animals, but most never leave here. Which means they can't take new horses in.

Alcaraz introduces me to the animals. And their stories are pretty horrific.

There's a kids' pony named Samba that was found wandering along a highway. Katana, a pale broken shell of a horse, was found near death tied to a tree in a public park in Barcelona.

Alcaraz says people ditch their animals without concern for the consequences, or for the trouble they might get in because horse abandonment is not a crime in Spain.

To be fair, many people try to sell their animals first. But in today's market, it's a long shot.

I called Spain's biggest horse trader, a guy named Jorge Montiel, in Barcelona. He says top shelf show and race horses always sell. But your typical Spanish riding horse? For the last year, he says, there's been no demand at all.

"People are trying to just give them to me, he says. For free. Anything to keep them from the freezers," Montiel says.

By the freezers, Montiel means the slaughterhouses. Horse slaughter went up by about 30 percent last year.

Most of the meat was exported some of it possibly ending up in processed foods, part of a continent-wide scandal. But a typical riding horse isn't fit for consumption, not even as animal feed, because it's been vaccinated.

So families who can no longer afford the $400-a-month upkeep costs, and who can't sell their horse or find a sanctuary, just quietly slip the reins off.

Experts say an abandoned domesticated horse can typically survive for about six months in the wild, before starving or dying of disease.