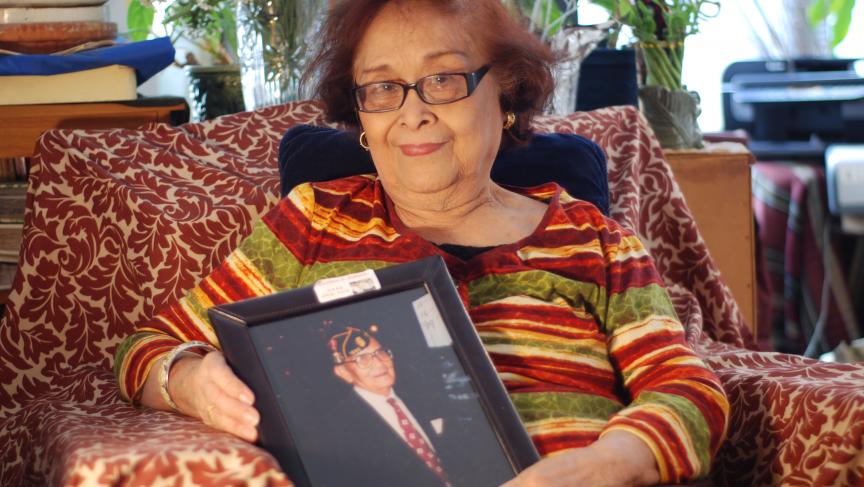 Remedios Cabagnot’s late husband, Serviliano Jambo Cabagnot, was among hundreds of thousands of Filipinos who served with U.S. forces during World War II. Many migrated to the U.S. in the early 1990s. (Photo by Odette Yousef.)

With Congress poised to tackle comprehensive immigration reform, some are worried about what will be left out.

In particular, there’s concern that a policy overhaul might eliminate some categories of family visas. That’s troubling to one group of immigrants who already wait the longest for those types of visas, and who feel they should be given special consideration.

They are the families of Filipino veterans who fought for the United States during World War II.

Their story really begins in the early 1940s. After bombing Pearl Harbor, the Japanese invaded the Philippines, which, at that time, belonged to the US.

“We really fought for them,” said 86-year-old Remedios Cabagnot, sitting in her high-rise condominium in Chicago’s North Side. “I can still remember the war. I was a teenager then.”

During the war, Cabagnot’s husband, Serviliano Jambo Cabagnot, was one of hundreds of thousands of Filipinos who fought alongside U.S. forces.

The couple came to the US in the early 1990s, when Congress allowed Filipino vets to become naturalized citizens. Cabagnot said they wanted to live in the country she still calls “the land of honey.” One of their sons, Al, was already here, and Remedios Cabagnot felt it wouldn’t be long until her other two sons and daughter joined them.

“We petitioned (for citizenship) right away,” Cabagnot said.

Al Cabagnot said they weighed things carefully when they filed the petition. In particular, they deliberately had his father, the WWII veteran, sponsor the petitions.

“We thought being a U.S. vet, it would be faster, it would facilitate the processing,” he said. “And we were so happy because they got approved right away. But we didn’t know we had to wait 20, 17 years for the visa availability.”

In fact, Remedios and Al Cabagnot are still waiting. The petitions for the rest of their family are stuck in a backlog of visa applications — a backlog experienced most severely by Mexicans, Chinese, Indians and Filipinos. Filipinos can wait the longest for certain types of family reunification visas because the country is the second-largest immigrant group in the U.S., after Mexicans.

“Filipinos have this waiting time, (a) substantial number of years compared to others,” said Jerry Clarito, executive director of Chicago’s Alliance of Filipinos for Immigrant Rights and Empowerment.

Clarito said Filipinos apply for a disproportionate number of family visas, but each year, the U.S. determines how many visas may go to adult or married children and siblings from each country. This has created long lines from countries that are heavily represented in the mix of U.S. immigrants.

“They were in the front line of the battle,” Clarito said. “Now they are behind, waiting.”

Filipino veterans have gone through the trauma of war, and then endured the difficulties of acclimating to a new country, Clarito said.

“If we recognize the services of the military people, we do recognize that the family support is number one to make the veteran or military person sane,” he said.

Clarito’s group is lobbying Congress to remember this as it starts re-evaluating U.S. immigration policies. He said he would like to see a stand-alone bill to address the long waits that children of Filipino veterans experience, so that it doesn’t get lost in a larger bill for comprehensive immigration reform. Lawmakers from Hawaii recently introduced the Filipino Veterans Family Reunification Act, which, if passed, would exempt children of Filipino veterans from the visa line.

As for Remedios Cabagnot, she’s seen her children a few times these last 23 years. They visited twice on tourist visas, and she last went to the Philippines 15 years ago. But Cabagnot is now too old to travel.

Her family’s bid for reunification got more complicated two years ago, when her husband died, and she received a letter in the mail, saying that because of his death, the petitions were denied.

“We were all devastated when they told us that our prayers and petitions died with my husband,” Cabagnot said.

Still, Cabagnot and her son Al hope Congress will remember them as it tackles immigration. In the meantime, they email their family in the Philippines, always updating them on the status of the petitions.