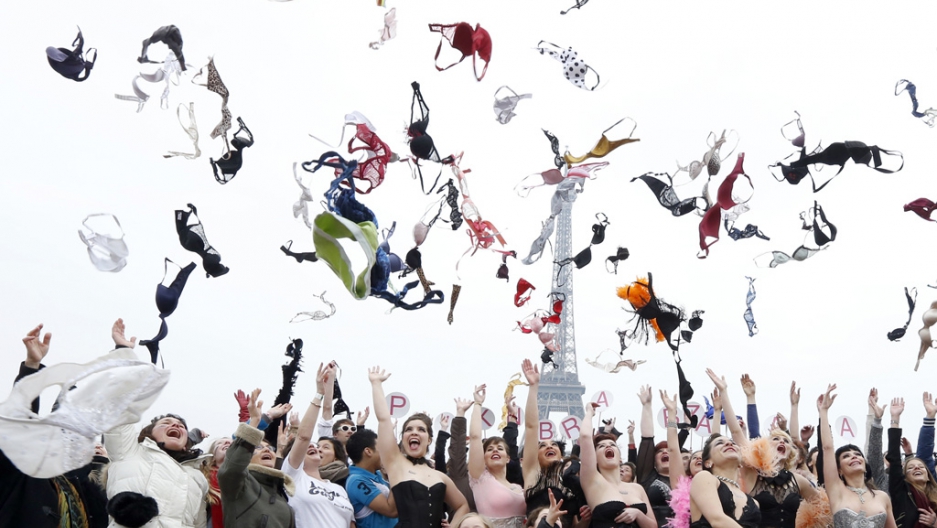 Women throws bras into the air during "Pink Bra Bazzar," an event designed to bring awareness to breast cancer, on March 25, 2013 in front of the Eiffel Tower in Paris.
Credit: PIERRE VERDY
Share

According to a new French study, women have reasons to burn their bras that have nothing to do with glass ceilings or women’s liberation.

Results from a 15-year study published Wednesday conclude that bras are a “false necessity” that provide no benefits to breasts, The Local reported.

“Medically, physiologically, anatomically — breasts gain no benefit from being denied gravity,” said the study’s author, University of Besancon Prof. Jean-Denis Rouillon. “On the contrary, they get saggier with a bra.”

That appears to be due to less muscle development in women who wear bras. The study found women it tracked who went braless had better muscle tone and higher lift than their bra-wearing counterparts.

Rouillon, a sports science expert, took measurements from 130 women during the life of the study.

One woman who participated told The Local she can “breathe more easily. I carry myself better and I have less back pain.”

Cardiff University Prof. Robert Mansel and Simon Cawthorn, from Frenchay Hospital in Bristol, asked 100 women to ban their bras for three months and then return to wearing one for another three months.

On average, the women were pain free more (about seven percent more) without a bra, the Daily Mail reported.

The doctors say there might be a correlation between breast pain and developing breast cancer, although they didn’t connect bras and cancer directly.