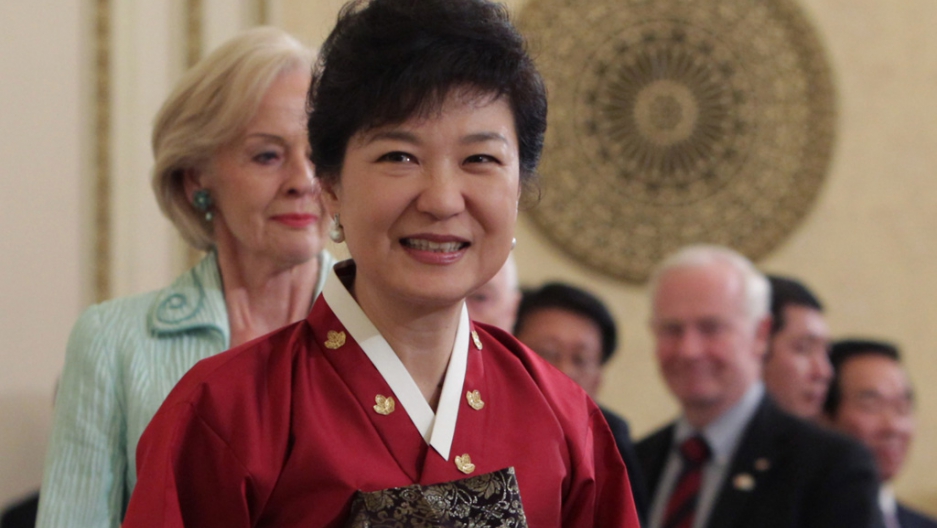 On March 13, nearly three weeks after Park Geun-hye became the first female president of South Korea amid a climate of rapidly escalating tension that began with a February nuclear weapons test, the North issued its first official statement directed at Seoul’s new leadership.

“This frenzy kicked up by the South Korean warmongers is in no way irrelevant, with the venomous swish of skirt made by the one who again occupies” the presidential Blue House, said the Ministry of the People’s Armed Forces in a statement.

It was a sexist jab — in Korea, a “swish of skirt” is a common insult referring to a woman who is overly aggressive.

But while Pyongyang may have no qualms about taking cheap shots at Park’s gender, Park herself — even as the first woman to hold the highest office in a country that remains deeply patriarchal — is unlikely to prove much of an ambassador for women’s issues.

“She doesn’t have a feminist agenda of any kind — at all,” said Clark Sorenson, director of the Korean Studies Institute at the University of Washington. “So in that sense nothing’s going to happen.”

South Korea’s gender inequality is the highest in the developed world. The country ranks 108th out of 135 on the World Economic Forum’s Global Gender Gap index, just behind the United Arab Emirates and one place ahead of Kuwait. Women are paid an average of 39 percent less than men and are grossly underrepresented in high-profile jobs. But the problem also runs deeper than the pay gap. It’s an entrenched cultural dynamic that still devalues their contributions compared to those of men and often leads to workplace subjugation.

“People say men get paid more in Korea because they have to join the army,” said Jihyun Yi, 39, an English teacher on Jeju Province. “But at the same time, you know, women have to deal with pregnancy. They have to take care of their children. I don’t think it’s a right reason that men should get paid more.”

At her previous job, another woman, Yoo Ji-Yun, a 28-year old business analyst in Paju City, said she was expected to clean the office and make coffee for her male boss — an experience she views as fairly typical.

“My boss demanded [I] support him as a secretary even though I was not,” she wrote in an online chat. “I felt nonsense! What a nonsense!”

Both women would love to see a cultural shift, but they don’t view Park as much of a change agent. And neither do most analysts: Park, even though she may be the first woman to take the country’s highest office, is in many ways exactly the wrong person to represent women’s rights. Much of her political support is drawn not from her own achievement but from the legacy of her father — the former president Park Chung-hee, a dictator with a lousy human rights record but whom many older Koreans, especially, credit with laying the foundation for Korea’s economic rise. For them, Park’s primary support bloc, another Park presidency is not so much the beginning of a new era as the continuation of a previous one.

“She’s a dictator’s daughter,” said Jihyun. “Many sad things happened [during] that time — young people think it’s, like, terrible. Old people, like in their 60s and 70s, believe that Park Chung-hee kind of like saved our country.”

And in Park’s own political career — since serving as acting first lady from 1974 to 1979 upon her mother’s assassination, she has been a legislator, party chairperson and party president — her conservative political agenda has focused primarily on geopolitical stability and economic development over social issues.

“Evaluating her record as a politician in her own right without reducing her to her political pedigree, there is little to celebrate,” wrote Seungsook Moon, a professor of sociology at Vassar College and a leading voice on contemporary Korea, in a recent CNN op-ed. “She lacks a track record of practicing such positive feminine leadership and supporting policies to promote gender equality and empower social minorities in general.”

Nor did Park appoint any women as senior presidential advisers. Thus far she has selected women for only two of 17 cabinet positions, one fewer than her male predecessor.

“I mean, she couldn’t have appointed no women to the cabinet,” said Sorensen. “No president, no matter their gender, could do that anymore. But two is quite a small number.”

Considering Park’s track record as a politician, the lack of female appointees isn’t particularly surprising. But her apparent gender indifference still strikes a marked contrast from the fall campaign, when, eager to garner support among female voters, Park didn’t hesitate to play up her own femininity.

Besides making promises for things like additional daycare centers, Park, who has never married, frequently presented herself as a “mother figure” who could care for her country as a mother cares for a child—all the more so because she doesn’t actually have a family of her own.

In debates, according to Sorensen, who was in Korea during the campaign and closely monitoring the election, she was largely successful in connecting with women when her opponent was not.

“She was quite sensitive to the pressures of working mothers and parents,” he said. “She really got it as to what the problems of women really are.”

And even if she likely won’t do much to address those problems, there is always the argument, of course, that her election is already a positive for women. “That Korea elected Ms. Park as first CEO of the nation itself is recognition that women can move up,” said Kongdan Oh, a Korea expert at the Brookings Institution. “Just seeing her, maybe some smart girls and students will aspire to be leader of nation.”

“If she achieved by herself, without her father’s name, I would congratulate her and support her,” said Yoo, the business analyst. “But it wasn’t. She’s been raised like a princess since her father’s regime.”

“Inside her I think she’s a conservative Korean man,” she said of Park. “I don’t think she cares about women at all.”