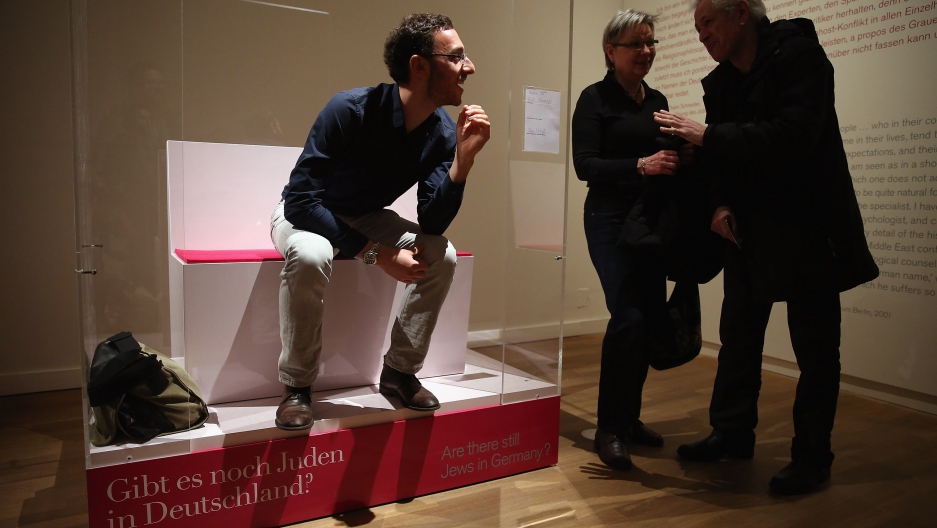 Bill Glucroft, an American Jew living in Berlin, chats with visitors from his box in the 'live exhibit' portion of the exhibition "The Whole Truth: Everything You Always Wanted To Know About Jews" at the Juedisches Museum (Jewish Museum) on April 4, 2013 in Berlin, Germany. The exhibition presents everyday aspects of Jewish life, poses simple questions answered with exhibits and challenges certain stereotypes. However its live exhibit, which features a Jewish person who sits in a plastic enclosure open on one side for several hours a day to answer visitors' questions, has sparked criticism from some Jewish groups.
Credit: Sean Gallup
Share

A weird thing to say. Or maybe I just didn't say it right in German. Whichever, the frazzled young woman at the coat check thought I just didn't want to wait in the longest line I've ever seen at Berlin's Jewish Museum.

I felt bad cutting, but it was a good 40 minutes and I had 15. The back-and-forth continued, the confusion mounting until at last a native speaker intervened: "He means, he is the exhibit."

It was my turn to do what many of my Jewish friends here have already done: sit in an open-faced, plastic box ("throne" as another cheerfully called it) for two hours to field questions from curious museum-goers. The human installation comes at the end of a new, head-turning exhibit, "The Whole Truth: Everything you always wanted to know about Jews."

The concept is as simple as it is bold. In a country rich in Jewish history but lacking actual Jews, put it all on the table -- true and false, complementary and denigrating, the stereotypes, questions, preconceived notions and, maybe most of all, the 'nothing at all' that most pointedly reveals the Holocaust’s stubborn presence.

Adolf Eichmann was my first thought when I learned exactly how the Museum was to present the living history portion of the exhibit. Justin Timberlake — well known in the US for putting something else in a box on Saturday Night Live — was the next.

The concept hasn't gone down easy with everyone in the Jewish community (does anything?), and I was immediately sympathetic to the critics' cries. A person in a box? A Jew, like an animal in a zoo, to be observed and pointed at? Isn’t this what Hitler wanted in his Museum of an Extinct Race?

We Jews are already an odd bunch — a minority in number but not in presence, cut off from the mainstream while still influencing it, with a long history of unrelenting persecution leading to a recent history of uncalibrated power. Is such a presentation really the way to go?

I went in skeptical, ambivalent at best, motivated however by the chance to be part of the larger Jewish and Berlin communities. Two hours later, seeing the response and better understanding the context into which the box has been dropped, I became convinced: This is a necessary and overdue exhibit not to be outright dismissed.

When a pair of 20-something, English-speaking Jews asked the first question, they didn’t realize they were setting up to explain the exhibit's very intention. They just thought the questions printed on the walls were primitive and distasteful, and couldn’t understand why the museum would use them.

What they didn’t know was where they came from: not from the curator’s imagination but from guest comments. The exhibit simply recognizes what’s already out there and wants to confront it (and maybe have some fun, too).

Of course it’s simple, even superficial. Like Pesach’s child who does not know how to ask, this exhibit has been created for a society confronted ad nauseam by what it did to the Jews with very little regard to what Jews are doing today. For most Germans, the only Jew they know is a dead Jew.

The concept of a current, evolving, vibrant, diverse Jewish culture, in Germany and elsewhere, has been largely overshadowed by the necessary reminder of the Holocaust and the ongoing antics in the Middle East.

A Jew in a box may be a contrived way to force interaction between Jew and non-Jew, and Germany needs many such boxes. But as the text on the wall next to the box reads, many Jews, not only but especially in Germany, already feel like a curiosity. If the box reflects and represents the experiences of people, then the Museum is doing what museums exist to do.

In my two hours, the questions were mostly specific to me: Who are you? Why are you here? How did you come to participate in this? The simplest question was also the hardest to answer: What kind of Jew are you? I grew up conservative, kept (and to some extent still keep) kosher, had a bar mitzvah, can read and write but can’t speak Hebrew, try to go to synagogue a few times a month, and love having shabbat dinner with friends and celebrating most of the holidays.

But I don’t really believe in God, the Torah is just a nice story with a lot of savagery and counting and my girlfriend isn’t Jewish.

Does that make me religious? Far from it. Reform? No thanks. Observant? Perhaps. Traditional? Not sure what that is, exactly. A bagel connoisseur? Definitely. So, what kind of Jew am I? Good question.

It is this very complexity I realized the box adds to the exhibit’s otherwise simplicity, even self-aware irony. Each Jew who sits there is a little bit but not at all like every other Jew who sits there. Taken as a whole, we see Jews like any other group: difficult to homogenize, worthy of respect and not above criticism.

A visitor’s greatest takeaway? Maybe the Jews are on to something: the only good answer to a question is another question.

Bill Glucroft is a writer and provides communication services to companies around Berlin.