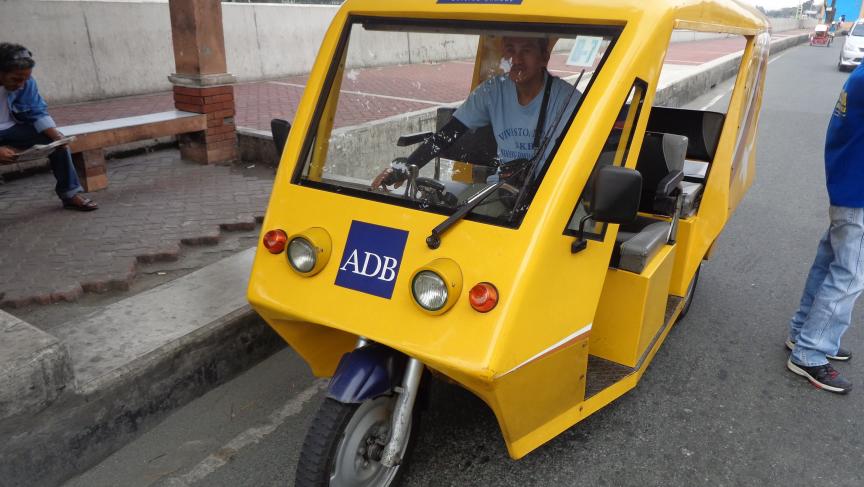 Trike driver Alfredo Forelo traded in his old, gas-powered trike for this new electric model, developed by the Asian Development Bank. The ADB hopes thousands will soon hit the streets of Manila. (Photo by Jason Strother.)

Sometimes to get around chaotic Manila, you need to take a trike.

Trikes are motorcycles with sidecars. In this city with notoriously awful traffic, they’ll get you where you need to go faster than most alternatives. But they’re not exactly model urban citizens.

Trike drivers weave through the thick traffic and up onto sidewalks.

They’re also noisy and emit a lot of exhaust.

But not Alfredo Forelo’s. A few months ago, the 38-year-old trike driver traded in his old gas-powered model for a new one that runs on batteries.

The new trike produces no exhaust, and Forelo says he really feels the difference. On his old trikes, he says he used to get sick a lot.

And quiet. The electric trikes can hardly be heard over the din of the city.

Right now, Forelo’s is one of about 15 e-trikes on the streets of Manila. But the Asia Development Bank imagines a whole city of them — a fleet of 100,000 within five years.

Sohail Hasnie, who heads the bank's e-trike program, says the new bikes will have wide-ranging benefits, from saving oil to cutting pollution.

“The Philippines government spends $8 to $10 billion on importing oil,” Hasnie said. “And, of course, if you are a pedestrian, you might like riding something that is safe, which is comfortable. And also (the) air, it is cleaner. E-trikes provide all those solutions.”

The bank hopes to start taking bids from companies to build the e-trikes this spring. But the plan to help improve Manila’s environment is getting pushback from an unexpected source: environmentalists.

Greenpeace’s Philippines program manager, Beau Baconguis, says e-trikes won’t eliminate pollution from the vehicles, only transfer it from their tailpipes to the smokestacks of coal-fired power plants.

“While the environmental impact is not direct, the emissions there (are) coming from the coal plant when you charge your trikes,” Baconguis said.

Other environmentalists object to the e-trike’s use of new, lithium ion batteries. Red Constantino, director of Manila’s Institute for Climate and Sustainable Cities, says there is virtually zero after-sale service in the country for lithium batteries.

“If one single cell breaks down,” Constantino said, “the whole battery goes kaput and there is no repair shop anywhere for such batteries.”

Constantino says while ordinary lead batteries have their own environmental problems, at least there are recycling centers for them.

Constantino’s Institute says it has a better plan — an electric fleet of Manila’s iconic small passenger buses, known as jeepneys.

Constantino says replacing traditional jeepneys with electric ones beats building e-trikes for a number of reasons, starting with their size.

“The bigger the vehicle, the more efficient it is,” Constantino said. “And tricycles are small. They (also) encourage door to door transport of people instead of allowing them to walk.”

And Constantino says trikes of any kind will also remain a big safety concern in Manila.

“They are very notorious in terms of not following any traffic rules,” he said.

Hasnie concedes that his e-trikes aren’t a perfect solution. But he says they’ll be a big improvement.

For instance, he says, while they might not eliminate pollution, they will cut carbon dioxide emissions from trikes by a third, and could someday be run off cleaner, renewable power.

And Hasnie says the small e-trikes are much more affordable than bigger jeepneys, which helps poor drivers like Forelo make a living.

Back on the road, Forelo says he’s happy with his new electric trike. It’s healthier, he says, and he brings home more money because it’s much cheaper to charge his battery than it was to fill up on gas.

So would he ever go back to driving a gas powered trike?

And with 100,000 more electric trikes on the way, he may soon have a lot of company.