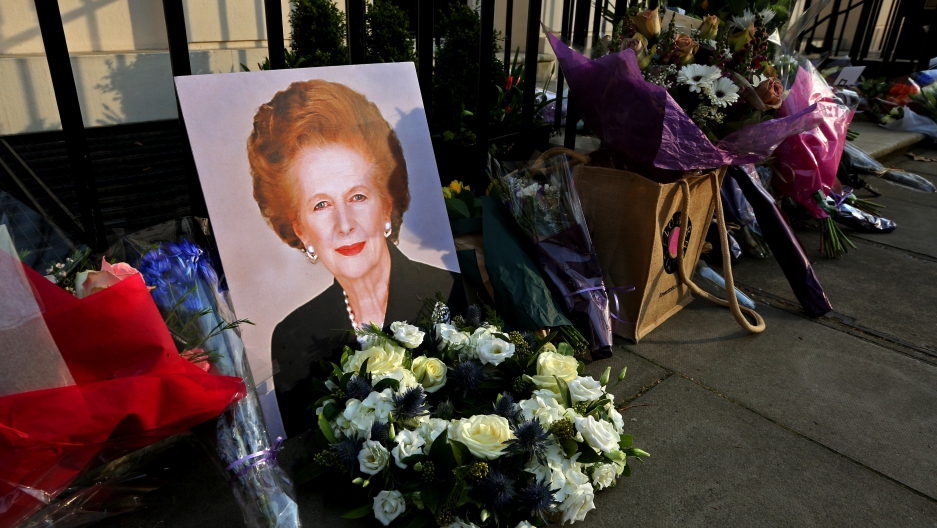 LONDON, UK — Margaret Thatcher, Britain’s first female prime minister and one of the 20th century’s most prominent political figures, died of a stroke in London on Wednesday. She was 87.

Her death prompted tributes from around the world for the first elected female leader of a major Western country, and reignited debate over the contentious legacy of her unflinchingly conservative policies.

“We've lost a great leader, a great prime minister and a great Briton,” said Prime Minister David Cameron, who cut short a planned tour of Europe following news of her death. “She didn't just lead our country, she saved our country, and I believe she will go down as the greatest British peacetime prime minister."

“Margaret Thatcher was the greatest advocate for competition that we have had in a long time,” Richard Branson tweeted. Flamboyant UK business mogul Lord Alan Sugar credited Thatcher for sparking “the entrepreneurial revolution that allowed chirpy chappies to succeed and not just the elite.”

She was called a “true friend” to America by US President Barack Obama, “a great politician” by former Soviet leader Mikhail Gorbachev and “a woman of greatness” by Israeli Prime Minister Binyamin Netanyahu.

For those who decried Thatcher’s vilification of the welfare state and unyielding opposition to unions, however, news of her death uncorked fresh fury toward her.

A website operating since 2010 called “Is Thatcher Dead Yet?” updated its single page to a gleeful “YES” on Wednesday, accompanied by suggested soundtracks (led by “Ding Dong the Witch Is Dead”) and a Facebook directory listing celebratory parties.

“I say this to demonstrate her unpopularity, not to be disrespectful,” said Carol Horne, a South African expatriate who has lived in London since 1999. “When I heard that she will be cremated, my first thought was, ‘Unsurprising, considering how often I've heard the phrase ‘One day I will dance on Thatcher’s grave.’”

The former Margaret Roberts was born Oct. 13, 1925 in Grantham, England to Alfred and Beatrice Roberts. The grocer’s daughter was admitted to Oxford to study chemistry in 1943 and gave her first political speech two years later, at a Conservative Party meeting during her summer break.

"I speak as a very young Tory," the Sleaford Gazette quoted the future leader as saying, "and we are entitled to speak for it is the people of my generation who will bear the brunt of the change from the trials of the past into calmer channels."

Her forceful personality was apparent early on. “This woman is headstrong, obstinate and dangerously self-opinionated,” wrote one prospective employer on her rejected job application. She eventually found work as a research chemist.

Thatcher twice unsuccessfully ran for the parliament seat of the solidly Labour district of Dartford, although she also gained the attention and admiration of Conservative Party figures.

She married Denis Thatcher, a businessman she’d met at a dinner party in Dartford, in December 1951 and gave birth to twins Mark and Carol two years later. The couple remained married until his death in 2003.

In 1959, Thatcher won the parliament seat in Finchley and set about steadily rising through the Conservative leadership ranks.

One of her first major clashes with public opinion came in 1971 during her tenure as education secretary under Prime Minister Edward Heath. The Conservative government scrapped free lunchtime milk for all children over 7 years old in a bid to cut expenses — a wildly unpopular move that earned Thatcher the nickname “Milk Snatcher.”

After upsetting Heath as party head in 1975, Thatcher was a forceful leader of the opposition, decrying the welfare state and excess government and arguing passionately for enterprise. A fiery speech against the evils of communism led a Soviet newspaper to dub her the “Iron Lady,” a not-so-well-intended nickname she happily embraced.

On May 4, 1979, Thatcher — who six years earlier had told a BBC interviewer “I don’t think there will be a woman Prime Minister in my lifetime” — became the United Kingdom’s first female leader.

With her booming voice and steely demeanor, she became a political celebrity around the world, both loved and detested for her unapologetic embrace of free enterprise and the privatization of formerly state-owned industries.

“Harmony” isn’t the word one might use to characterize Thatcher’s time in No. 10. She cut a formidable and controversial figure, whether demanding a “refund” for Britain from the European Community or waging war with Argentina for control of the Falkland Islands.

From 1984 to 1985, she faced England’s striking miners with violent and unyielding force before crushing the unions, a deeply divisive and far-reaching turning point in Britain’s industrial and social history.

Her legacy is more complicated than either her most ardent admirers or critics would care to admit, however. She was one of the first heads of state to speak out against global warming; she dismissed Nelson Mandela’s African National Congress as a “typical terrorist organization” and opposed sanctions against South Africa’s apartheid government.

In Northern Ireland, where she presided over the Anglo-Irish agreement that gave Ireland increasing influence in Northern Irish affairs — a decision she said she later regretted — “she pleased neither Republicans nor Unionists,” said Alan Meban, a Belfast political commentator.

However, she earned plaudits on the world stage for being one of the first Western leaders to recognize Gorbachev as a new breed of Soviet leader. “I like Mr. Gorbachev,” she declared in 1984, shortly before he took power. “We can do business together.”

After three terms in office, Thatcher lost control of the Conservative Party and left Downing Street in November 1990, returning to parliament for two more years before retiring from public office.

She was later honored as Baroness Thatcher of Kesteven.

After a series of mini-strokes in 2002 and a later diagnosis of dementia, Thatcher largely receded from public life and appeared frail during her increasingly rare appearances. She last spoke in public in February 2007 at the unveiling of her statue in the House of Commons.

"I might have preferred iron, but bronze will do. It won't rust,” she said. “And this time, I hope, the head will stay on." (Vandals had decapitated a previous statue of the baroness at London’s Guildhall in 2002.)

More from GlobalPost: The Iron Lady: In memoriam (PHOTOS)

According to Thatcher’s wishes, she will not lie in state, but receive a “ceremonial” funeral, like the one given to the Queen Mother and the former Princess Diana.

Her death comes as Britain is run by another Conservative-led government that’s also generating controversy for slashing public benefits and questioning the country’s membership in the EU, an issue set for a referendum in 2017.

As the debate over Thatcherism continues, her beliefs remain as much a part of modern British political life as any of the MPs celebrating or questioning her legacy today.

"I am not a consensus politician,” she said in 1979, presciently. “I'm a conviction politician."