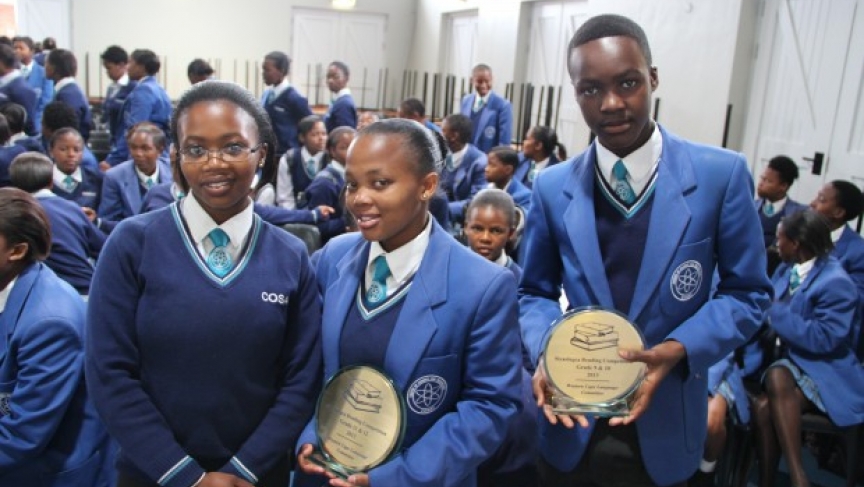 English is the primary language of government and commerce in South Africa. The same goes for education. Public school teachers are supposed to teach their students in English, beginning in the fourth grade.

But partly because of a complicated history of language oppression, the government goes to great lengths to support indigenous South African languages. At most public schools, students are required to take four years of English, and four years of a “home language.” For most COSAT students, it’s Xhosa.

When I first heard about this rule, it sounded a little strange to me. I remembered a college friend who was fluent in Spanish, and took Spanish 101 – just to get an easy A.

But at COSAT, that’s not the case.

“Just because they can speak it, doesn’t mean they know it,” Mrs. Booi, a Xhosa teacher at COSAT, recently told me.

She says some students do well, but many struggle – just like any other class at COSAT.

“Many of the students can barely read in Xhosa. And most don’t speak it properly. They use too much slang – too many improper words,” she said.

It makes sense, if you think about it. Many of the students’ parents didn’t attend school, and those who did got an inferior education, as dictated by apartheid law. They also might not have been allowed to read and write in Xhosa. Their children – current COSAT students – have learned Xhosa by hearing it, not by reading bedtime stories with their folks.

In an effort to promote indigenous language literacy, the government sponsors several initiatives. One is reading competitions.

Over Easter break, three COSAT students took part in a competition. About a dozen other schools were also involved. The students were asked to read passages aloud in Xhosa, and to answer questions about what they read. They were scored on pronunciation and comprehension.

Perhaps unsurprisingly, the COSAT students came out on top. Sibonisiwe, Asiphe, and Anda (grades 12, 11, and 10, respectively) took home top honors in their grade levels. This morning, they got a big round of applause from their peers at a school assembly.

But when I asked some other students if they planned to participate in a future competition, I didn’t sense a lot of interest.

“The most important thing for me is learning English,” a tenth-grader named Sapang told me.

“It’s very hard to learn in English, when you’re coming from a background where your parents and teachers don’t speak it,” he said.

That’s the reality for many students at COSAT. They’re taught in a language that they haven’t fully mastered, or perhaps haven’t even come close to mastering. And they have to comprehend challenging mathematical and scientific ideas in that language.

With so much pressure to succeed in their math and science classes, many are left uninspired by their home language.

As for the students who won the Xhosa competition?

“We’re happy we won,” Asiphe said, holding her trophy. “But next time, we want to get more students involved.”