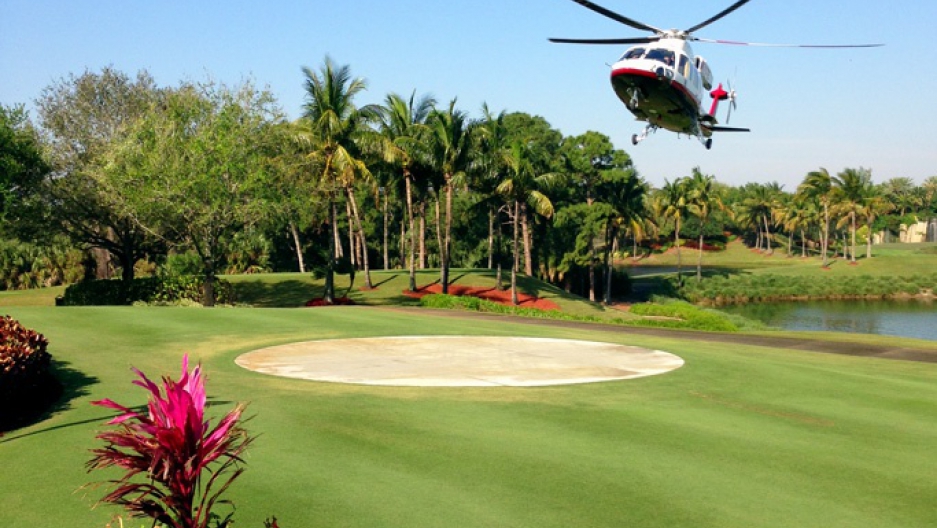 Scenes at the Trump International Golf Club, where membership costs $250,000 just to apply, plus another $30,000 or more a year in maintenance and usage fees, in Palm Beach, Florida.
Credit: Ed Kashi/VII
Share

Editor’s Note: In the parlance of golf, it’s called ‘playing through.’

And the phrase seems a fitting way to describe how a wealthy, global elite manages to bypass the often harsh inequalities that exist at many of the most expensive, members-only golf clubs around the world.

The well-to-do who can afford the expensive course fees only rarely recognize just how vastly different life is for those who toil on the grounds or carry the golf bags and live below the poverty line. GlobalPost set out to explore this divide in the highest realms of golf, from the Gary Player-designed course on the desperately poor outskirts of Myanmar’s capital Yangon to the Trump International Golf Club in a deeply divided West Palm Beach, Florida.

Caddies, for example, who carry the golf bags for members at Trump International are paid a base rate of approximately $100 per day — about $24,000 per year — at Palm Beach with a membership fee of $250,000 reveals a disparity of wealth that is pretty much on par with the up to $1,250 a year that a caddie makes in one of Myanmar’s top courses compared to the $50,000 membership fees there.

From the golf courses of Palm Beach to Myanmar, GlobalPost found jarring levels of inequality between those who can afford membership and those who work on the course.

WEST PALM BEACH, Florida — Drive the palm-lined entrance to the Trump International Golf Club to where valets park a line of luxury vehicles that include a Ferrari GT, a Mercedes Benz SLS, a Cadillac Escalade ESV and the white Bentley owned by ‘The Donald’ himself.

Enter the marble foyer with a chandelier of gold and crystal, the antique Venetian cherub statues, the plush leather couches and out onto the back patio where Trump’s private helicopter awaits and where members head out to play on a picture-perfect March morning.

Look beyond the practice tees where Donald Trump — clad in his signature red golf cap — is warming up, and peer just over the crest of a perfectly manicured fairway and just behind a grove of mature Acacia trees and there stands the Palm Beach County Jail.

From a distance, the white, nine-story jail looks deceptively like an office building with its clean architectural lines and its reflective windows that conceal the steel bars of the cells. It would be hard to know from the vantage point of the fairway of one of the world’s more exclusive golf clubs, where members pay a $250,000 initiation fee, that there were 1,536 inmates inside those invisible cells.

It would be impossible to see the inmates shackled in chains as they were being processed into the detention facility that morning, a line of men and women who were mostly black and Hispanic and almost all poor. It would be hard to fathom that just a few hundred yards away, these people were being initiated into a criminal justice system that would in most cases condemn them to further poverty and further desperation.

America has the world’s largest prison population and in many ways poverty is hidden by incarceration. The criminal industrial complex with its warehouses of prisons and jails has become a kind of hidden American slum, a way to tuck away behind bars all the poverty and despair and he violence and drugs that come with it.

“I guarantee you those guys playing golf, they don’t know about those people in that jail and they don’t even think about those people. They don’t want to see poverty, or see inequality and they do everything they can to be sure they don’t have to see it,” said Harriet Goldin, a member of Trump’s nearby exclusive club Mar-a-Lago and a wealthy widow now remarried, when asked about the stark contrast of the golf club and the jail so close to each other.

Inside the golf club, at the members-only grill, there were small clusters of men in pastel colored golf shirts and healthy tans laughing and trading barbs as they eyed a television above a polished oak bar. The CNBC business channel was blaring at an unusually high volume. A ticker at the bottom of the screen flashed a list of stocks with a majority of the small arrows pointing up, indicating a rise in the stock price.

The CNBC anchor was broadcasting a healthy day in the market, gleefully asking, “How high can it go? A surge in the Dow today was good news on Wall Street...” The men quickly got back to the jovial conversations and the back slapping of a guys’ day out on the course. None of them wanted to be interviewed.

Anna Maria, who came from Venezuela, has worked in the restaurants at several of Trump’s different venues here where he has the golf club, the Mar-a-Lago, the Trump Plaza and several other properties. She was fearful of giving her last name because it could cost her slightly above minimum-wage job for talking to a reporter.

She said that the vast disparity of wealth in the US shocked her when she first arrived 10 years ago.

“America has the super rich and the super poor and it’s like there are fewer and fewer people who live in the middle. This is the land of opportunity, right? But I don’t know, is it still that?” she asked.

Over lunch at the Mar-a-Lago, Goldin reflected on her life, growing up in the middle class in Westchester County, New York and as fate would have it marrying into a wealthy family which has allowed her to raise her three children at a very high standard of living and to live in the exclusive enclave of Palm Beach for many years.

Goldin explained that her first husband was an auto racer who died young in a crash and his family’s fortune came to her. In recent years, she said, she has traveled in Africa and Asia and seen global poverty up close.

“I was just lucky that I ended up with a comfortable life here,” she said. “But with a different set of circumstances who is to say that I wouldn’t have ended up on the other side.”

The jail is on that ‘other side,’ and it is truly a world apart. But it is so physically close to the golf club that with a solid 9-iron shot from the far side of the fairway, a practiced golfer could hit up over the cart path, the blossoming plants and the thick hedge that hides a chain-link fence and hit the jail, or at least land the ball in the back parking lot.

As a day of golden sunshine faded to a gray dusk on a March evening, that back parking lot of the county jail was lined with a fleet of beat-up old cars: a rusted pickup truck with a rebel flag bumper sticker, a 15-year-old Ford sedan with a broken taillight and a line of several idling taxis. Bail bondsmen carrying briefcases hustled by and clusters of different families waited for loved ones to be released.

Trina Morgan, 34, who was looking through the thicket of the hedge and palm grove where occasionally a glimpse of a white golf cart can be seen or the thwack of a golf club or the ticking of sprinklers can be heard, seemed to agree with the wealthy widow Goldin’s point of view.

Standing on a cement ramp that leads out of the bank end of the prison, across a mote of fetid water and past a sign that says “Release Point. No Loitering.,” Morgan was waiting for her father to pick her up. She held a clear plastic bag which contained undergarments and a pair of flip flops and the paper work for the conditions of her parole. Morgan said she was pretty sure the 30 days in jail she'd served on a charge she did not want to discuss had cost her a job. She was not sure how she would make a $400 rent payment in the apartment where she lives with her two children.

“I guarantee you they have no idea what’s going on inside this building. It’s like a dungeon in there. It looks clean on the outside, but it is filthy and crowded,” said Morgan, shaking her head and exhaling a sharp stream of mentholated smoke from a cigarette she bummed from a taxi driver.

“That’s the truth,” said Debra Vadala, 40, from West Palm Beach, who had also just been released and like all the women filing out on this Friday evening when the sheriff’s officers were “processing,” as they put it, specifically female inmates in a facility that is rigidly segregated with men on one side and women on the other.

“This is a terrible place. It’s inhumane, really,” she added, with the small line of women all waiting to be picked up nodding in agreement.

Vadala was also holding a plastic bag with a few possessions and a packet of yellow paperwork with the terms of a restraining order after she had spent one night in jail and was pending trial on a misdemeanor charge based on what she described as a “domestic incident.” She said she grew up in Connecticut in a middle class family, the daughter of a baker. She has a full time job, but she said she sees the poverty around her and the way in which America is pulling apart.

“You’ve got billionaires over there and people who can’t even afford bus fare over here,” she said.

Vadala, being released from jail, and Goldin, sitting in Trump’s private club, both hailed form the middle class and both said they were shocked at where America finds itself these days.

As Goldin put it, “I have nothing against people who are successful. God bless them. But the disparity has become so great in this country. It’s become obscene in the last 15 or 20 years. I think we have really lost something with the collapse of the middle class.”

“I think we lose our soul, our belief in what makes us the greatest country,” she added. “I don’t think I am radical, but I care. Some people here might get mad at me for saying it, but I really think there is something missing in the hearts of this country.”