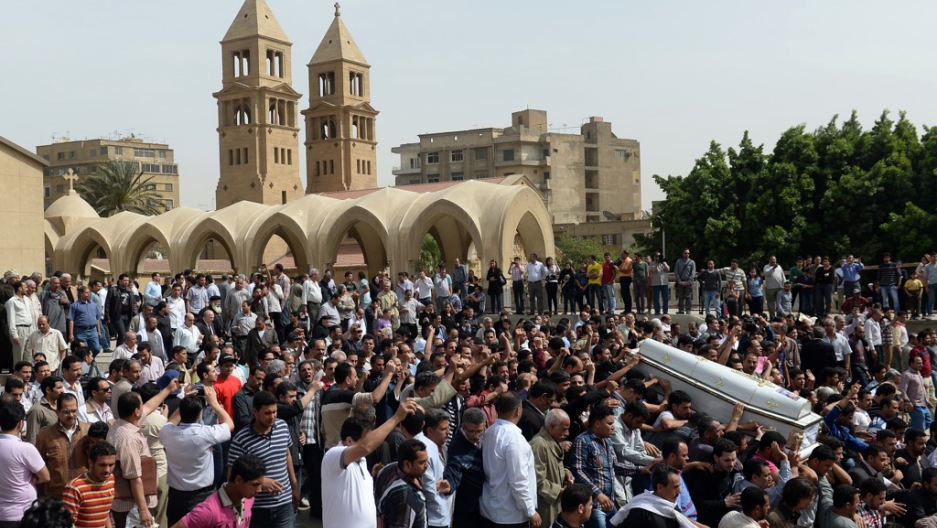 Egyptian Coptic Christians carry the coffin of one of the four Christians killed in sectarian clashes in Al-Khusus earlier this week, during the funeral service at al-Abbassiya Cathedral in Cairo on April 7, 2013. The country's Coptic Christians and Muslims have clashed on several occasions since the revolution that toppled former president Hosni Mubarak in February 2011.
Credit: KHALED DESOUKI
Share

A 21-year-old Muslim man died in hospital of a fractured skull, a security source told Reuters. A 30-year-old Christian man was killed on the scene.

At least 89 people were wounded in the violence, which broke out following the funeral of four Coptic Christians killed in a town north of Cairo the day before.

The service turned into a political demonstration, witnesses said, and when mourners spilled out of St. Mark's Cathedral chanting slogans against the ruling Muslim Brotherhood, a crowd gathered outside pelted them with rocks and molotov cocktails.

Both sides then threw stones at each other until police fired tear gas to separate them, which apparently caused further panic. The chaos reportedly lasted late into Sunday night.

Many Copts accused the police of standing by while they were attacked and directing their tear gas at Christians taking shelter in the cathedral, Reuters said.

President Mohamed Morsi, himself a Muslim, telephoned Pope Tawadros II, the head of the Coptic Church, on Sunday night, according to state media. Morsi said he considered any attack on the cathedral "an attack on me personally" and called for an immediate investigation into the incident.

"The protection of all citizens, Muslims and Christians, is the responsibility of the state," Egyptian news agency MENA quoted him as saying.

The sectarian clashes began in the town of Khosoos, north of Cairo, on Friday. Four Copts and one Muslim were killed.

The sectarian violence, which took place in and around Cairo over the past couple of days, was not the worst Egypt has ever seen. But the fact that the seat of Egypt’s Coptic Orthodox papacy was attacked — for the first time, and in the heart of Cairo — holds particular significance.

Witnesses speak of a siege-like atmosphere at the church, where Copts hunkered down under fire from local Muslim residents and even police forces that shot tear gas onto the cathedral grounds. Those inside the church also fired back.

Egypt’s minority Coptic community, which makes up roughly 10 percent of Egypt’s population of 90 million, has long been worried about the rise of Muslim extremism. Now that conservative Islamic leaders are in power and Egypt’s police force has weakened, the community fears a rise in attacks against Christian residents.

“We don’t just have fear here, but in every church across the country,” Amir Fikri, a 26-year-old Coptic resident of Cairo told GlobalPost on Orthodox Christmas earlier this year.

Police said they had arrested four people in connection with the fighting, the Associated Press reported, though no further details have been given.

Yet a perceived inaction by the police, in either assisting or ignoring the groups that led the assault on the church, has again raised the question of the state’s role in enabling sectarianism.

For some, they are directly responsible. According to others, they cynically use the unrest for political or other means.

The amount of control President Morsi has over the Interior Ministry remains a subject of debate.

Still, a lack of control shows a fractured government struggling to enforce the rule of law.

“Even if the whole police directorate was here,” Fikri said from St. Mary’s Church in the Cairo neighborhood of Imbaba. “They would leave because of how high the tension is” between Muslims and Christians.”

Christian, Muslim and secular leaders alike condemned the latest violence, though they reserved varying degrees of blame for the Muslim Brotherhood, the security forces and "foreign elements."