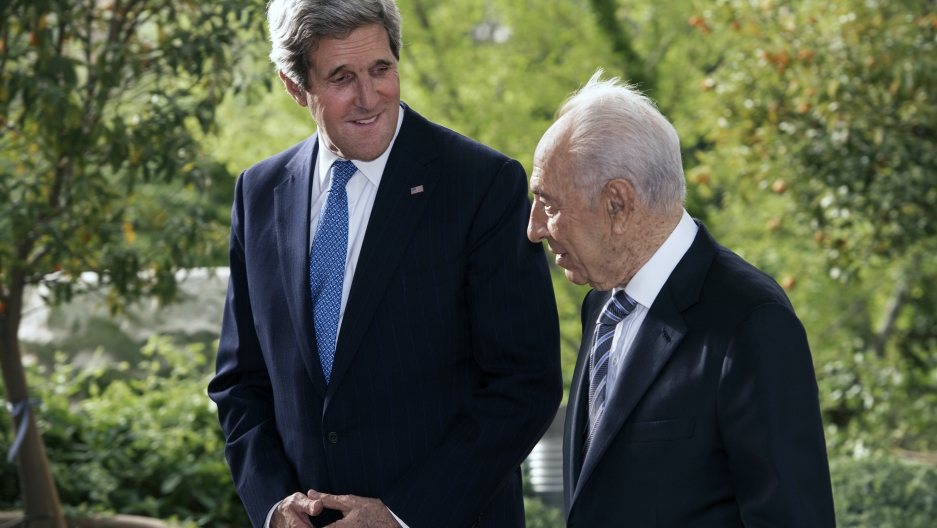 JERUSALEM — US Secretary of State John Kerry seems to be achieving at least one goal on his trip to Israel: his efforts to rekindle Israeli-Palestinian peace talks are taking place almost entirely under the radar.

Kerry has been in the region for over 48 frenetic hours, shuttling among meetings in Jerusalem, Ramallah and Ankara, and yet his visit in Israel has been barely noticeable.

Some people were even surprised to find out he was in town, on Sunday, when the Jerusalem-Tel Aviv highway was closed for an hour to allow his convoy to pass through.

He is the fifth headline tonight — on this day that marks Holocaust remembrance — on the main evening news broadcasts.

Now on his third trip to the Middle East since taking office in February, Kerry has staked his personal prestige and, to some extent, the tenor of his term on the issue of Israeli-Palestinian peace that's been stagnant since 2008. In order to succeed, he has to vanquish significant forces of inertia.

But Washington looks determined not to go it alone. Its top diplomat has tried to persuade Turkey — whose relations with Israel have cooled since a 2010 Israeli raid on a Turkish aid ship in Gaza — to engage in this region and help work to broker peace.

"Turkey can be a key, an important contribution to the process of peace in so many ways," Kerry told reporters. "A country as vibrant and energized as Turkey can have a profound impact on the peace process."

Whatever has leaked from his meetings here indicates that despite cordial welcomes, both the Israeli and the Palestinian governments have presented a series of impediments to the resumption of peace talks.

The Palestinians have several preconditions before they will agree to come back to the negotiating table, principally the cessation of all Israeli settlement activity (to which the United States is a party) and the agreement of the 1948 cease-fire lines as the basis for all negotiations.

The Israelis (and the Americans) are demanding that the Palestinians cease all unilateral initiatives such as their bid, last September, for an upgrade to "non-member observer state" status at the United Nations.

The 1948 cease-fire line is commonly called the 1967 line, because it was the line that the Arab League armies crossed in 1967 in an attempt to invade and vanquish Israel.

The Palestinians demand a status quo ante. That same invasion is the reason the government of Prime Minister Benjamin Netanyahu is not willing to agree to even consider a return to that frontier.

With massive upheaval in other nations in the region, the Palestinians fear their plight is far from a top Western priority. The paradox is that Kerry's attempt to make it a top US issue is nonetheless being received in such a lukewarm manner.

Some analysts say the principal issue on the table during Kerry's shuttle mission is: to convince the Israelis and the Palestinians both that their situation is more dire than it appears on a daily basis; that it is in fact unsustainable; and that the United States is here to prevent another regional fire.

Kerry is scheduled to meet with Netanyahu Tuesday.