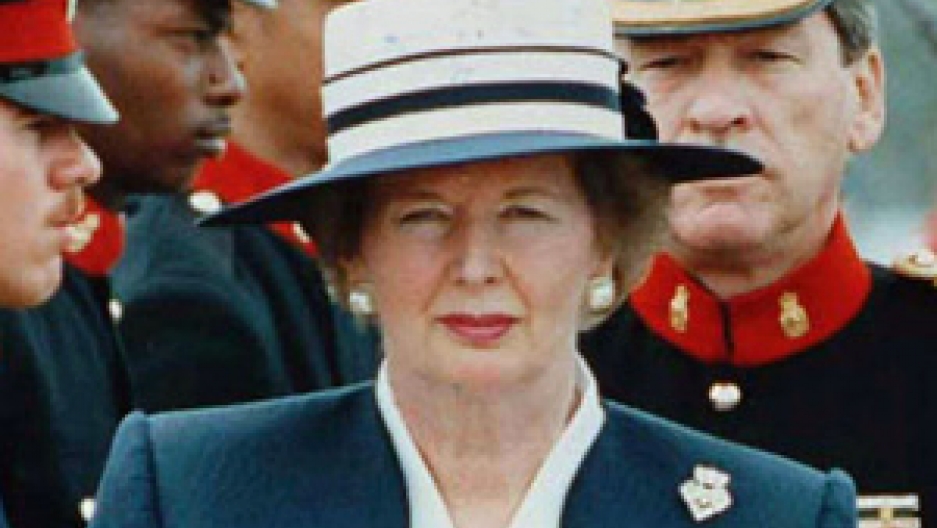 Share
Former British Prime Minister Margaret Thatcher died Monday in London at the age of 87. She had suffered a stroke. In 1979, Thatcher became Britain's first, and to date, only female prime minister. She went on to serve in that post for 11 years. For many in the US, Margaret Thatcher was Britain. The Very Special Relationship Margaret Thatcher made her first official visit to the White House at the invitation of President Jimmy Carter. "The United States is our friend, our ally, and our time-honored partner in peace and war," she said. "The history and the destiny of our countries have been and always will be inextricably intertwined." That relationship was made even more 'special' when Ronald Reagan arrived in the White House the following year. Reagan and Thatcher had already met in London a few years earlier, before either had assumed office, and they saw eye to eye on many issues. "Everything from economics to our ideas of what the role of government should [be]", said Reagan. "And I was greatly impressed by her." Global Influence In power, Thatcher and Reagan combined to engineer the end of the Soviet Union, working with the reforming Soviet leader Mikhail Gorbachev. "Margaret was a very active partner," he said, "a woman of conviction, devoted to her ideological vision. And she didn't hide her views: she was always arguing for them. She thought her experience in politics might help us with Perestroika." Thatcher and Reagan didn't agree on either British military action in the Falklands, or on the American invasion of Grenada, but Thatcher was a central partner for the United States. Former Secretary of State, Henry Kissinger, said she was 'almost considered part of the American decision-making process.' "She had access to President Reagan and he had a degree of respect for her that is almost unprecedented in my experience of American presidents and any foreign leaders", he said. Charles Powell was Thatcher's foreign affairs advisor for much of the 1980s. He said Thatcher was 'invariably forthright'. "She was no great diplomat," said Powell. "She believed in saying what she thought. And she said things, frankly, that most men wouldn't dare say. Something about being a woman leader made her, frankly, unembarrassable." A Divided Nation Overseas, the legend of Thatcher was often simple: She was the Iron Lady, scourge of communists. But at home she divided a nation, not least through her economic policies. Her successor as Prime Minister, John Major, said that the British economy was a 'frightful mess' in the 1970s. "Nobody believed it could be reformed. Nobody believed we could move from a neo-socialist economy to a free market economy. And that's effectively what she achieved in the first eight years of the 1980s." Thatcher championed the deregulation and privatization of Britain. She sold off National interests in oil, gas, transport and telecoms. Former newspaper editor, Andrew Neil recalls a sense that social barriers had become 'more fluid'. "People buying shares in companies that had never crossed their mind could be anything other than owned by the state." Love or Hate It was a worldview shared by Republicans in the United States: economic advancement through individual effort and responsibility. But the fruits of Thatcherism, as it came to be known, didn't reach every part of Britain. Many were left behind. For some, Thatcher became an object of hatred. Decades on, it's still hard for people in Britain to move beyond a binary picture of Margaret Thatcher. She won the Falklands War and defeated communism. Or she failed to impose sanctions on apartheid South Africa and offered support to the Chilean dictator, Augusto Pinochet. She made her country prosperous. Or she institutionalized greed in British society. In public, at least, Thatcher herself had no doubts when she left office: "We're leaving Downing street for the last time after 11 and a half wonderful years," she said, "and we're very happy that we leave the United Kingdom in a very, very much better state than when we came here 11 and a half years ago." That conclusion is still being fought over, with pride and with vitriol.