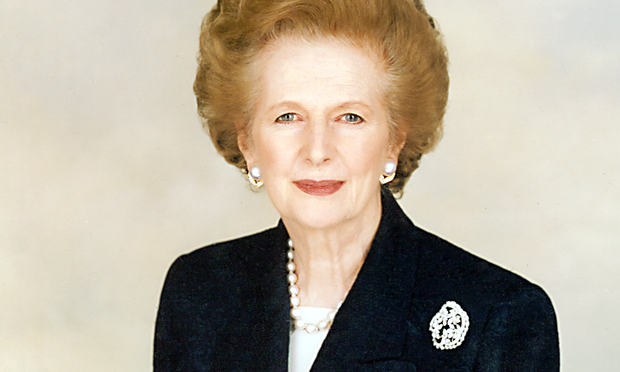 Conservative icon Margaret Thatcher, the first woman to be prime minister of the United Kingdom and the British counterpart to U.S. President Ronald Reagan, died on Monday.

Thatcher led the United Kingdom through the closing days of the Cold War and led the Conservative Party from 1979 through 1990, before finally retiring from Parliament in 1992. She was leader during the U.K.'s brief war with Argentina over the Falkland Islands.

Close to home, Buckingham Palace said Queen Elizabeth II was sad to hear about Thatcher's death, and would be offering private condolences to the whole family.

Her death was met with an outpouring of tributes from around the world.

"The world has lost one of the great champions of freedom and liberty, and America has lost a true friend. As a grocer’s daughter who rose to become Britain’s first female prime minister, she stands as an example to our daughters that there is no glass ceiling that can’t be shattered," he said in a tribute posted online by the White House. "Michelle and I send our thoughts to the Thatcher family and all the British people as we carry on the work to which she dedicated her life — free peoples standing together, determined to write our own destiny."

Other tributes, according to The New York Times, came from former U.S. Secretary of State Henry Kissinger, and former Soviet leader Mikhail Gorbachev.

Kissinger called her a “great leader” and a “good friend of the United States.”

“Our first meeting in 1984 marked the beginning of a relationship that was at times difficult, not always smooth, but was treated seriously and responsibly by both sides,” Gorbachev said, according to the Times.

But Thatcher was certainly not universally loved in life and that didn't change in death, either.

“The Labor Party disagreed with much of what she did and she will always remain a controversial figure. But we can disagree and also greatly respect her political achievements and her personal strength," said Ed Miliband, the current head of the Labor Party, according to the Washington Post.

But some reactions were less restrained than that.

Mez Tyson-Brown, 23, a London electrician, told the Post he went to Thatcher's townhouse to set a bottle of milk at her doorstep, in protest.

"“As a child, she took my milk away,” he said to the Post. “I’m not a big a fan of hers. She tore apart the unions. She messed up social housing. She basically tore apart this country.”