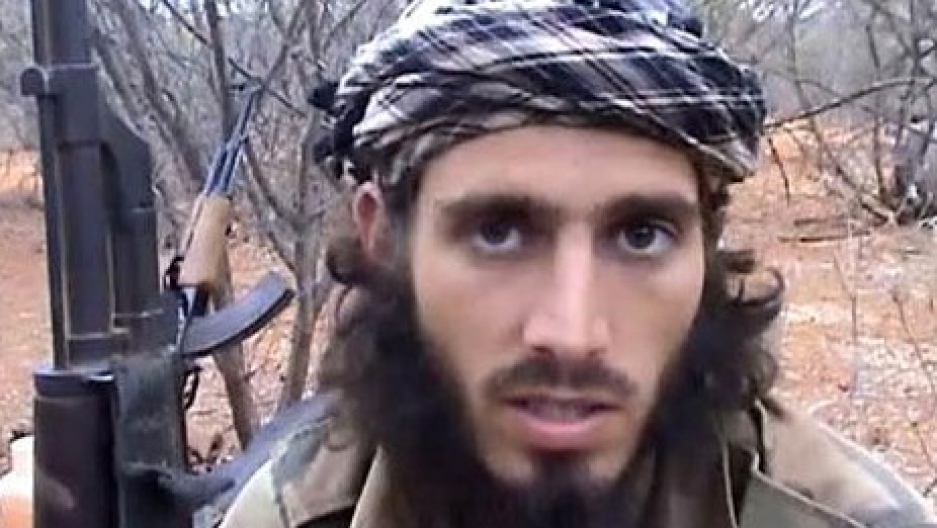 Omar Hammami is an American who moved to Somalia and has railed against the United States. (Photo courtesy of Hammami YouTube video.)

In some ways he sounds like a typical American 20-something.

He likes Chinese barbeque. He attended Bible Camp as a kid and played soccer in high school.

Born to a Syrian Muslim father and a white Protestant mother near Mobile, Ala., Omar Hammami came of age listening to music like Nirvana, watching movies like Fight Club, hanging out with his friends at Waffle House and going to school dances.

But somewhere along the way, Hammami's cultural orientation changed. Now he lives in Somalia where, in 2006, he joined an Islamist guerrilla army group called al-Shabaab.

His relationship with the al-Shabaab has faltered, though, and the U.S. government has placed a $5 million bounty on his head. He's a man with enemies on all sides.

Spencer Ackerman, a senior writer at Wired, interviewed Hammami via Twitter recently. He says Hammami could be the next American citizen to be killed in a drone attack.

"if any American is going to be a drone target over the next year or so, Hammami's at the top of the list. He's been wanted for the last several years in regard to his affiliation with al-Shabaab, al-Qaeda's Somali affiliate," he explained.

But presently, Hammami has devoted his energies not against the United States, but rather to undermining the legitimacy of al-Shabaab in Somalia, Ackerman said. And that, coupled with no indication Hammami is engaged in planning an imminent attack on the United States, could keep the American safe. For a while.

"In my discussions with him, first of all, he emphasized that his particular brand of jihad — and he is by his own reckoning still a jihadi — is devoted to combatting al-Shabaab in Somalia, and spreading a message," he said.

That message, though, isn't exactly popular in the United States. But Ackerman said, in his conversations, Hammami expressed a sort of aspiration to attack the United States, but certainly no plans to do so.

To be sure, Hammami has fond memories of growing up in the United States, and even, in some ways, of American culture. But Ackerman says he draws a distinct line between his own experiences and how much animosity he has for what American culture represents today.

Hammami says his transition from American kid to jihadi was gradual; Ackerman says no matter how much he pressed, he couldn't get him to identify any event or series of events that moved him.

"He described it as a process of 'coming to see his Islamic roots that he didn't have growing up,'" Ackerman said.