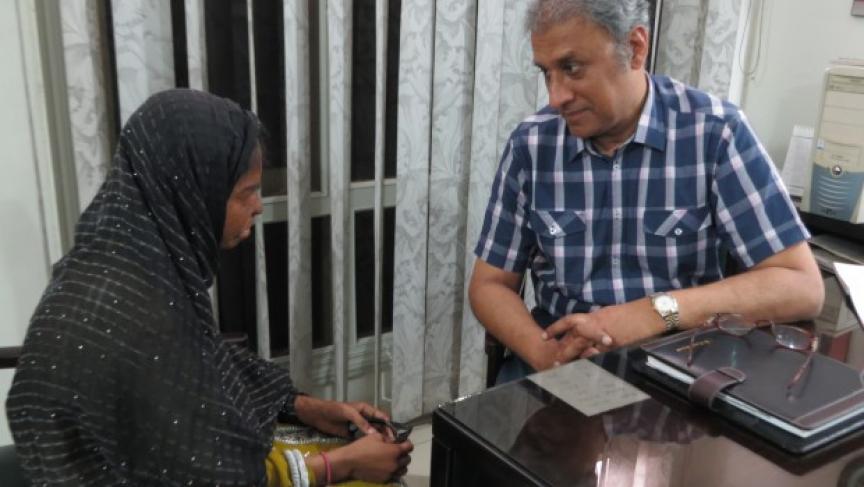 It’s a shocking crime, no matter where it’s committed.

Sadly, it happens more often around the globe than you think, and almost always, the victims are women. In India for example, police are investigating a recent acid attack against four sisters. This is a kind of crime that’s also all too common in neighboring Pakistan. At least 150 acid attacks were reported there last year.

Many more are not reported, because victims are pressured by their community to keep quiet. A new law gives acid burn survivors some legal recourse, but the scales of justice are often stacked against them from the start.

Sidra Yasmeen was attacked with acid at the age of 13. She's being seen at Dr. Hamid Hassan’s plastic surgery clinic in the garrison town of Rawalpindi.

Dr. Hassan gingerly removes her sunglasses and scarf to examine her injuries. Yasmeen says she’s fine, looking up at the doctor only when he pulls at her eyelids.

“She has lost eyesight in the right eye and as I see, even the left eye is not the best.” Hassan said after taking a deep breath. “She developed elopacia here for which a hair transplant was done. Then her eyebrows are also transplanted and then she had operations for (opening up the) upper and lower eyelids, and contracture of the neck.”

Half of Yasmeen’s face is burned. It’s rougher than the rest of her skin and a deep brown in color. Across her chest, her skin bulges into welts.

“Unfortunately there is quite a bit of disfigurement; she will need other surgery,” Hassan said.

So far, Yasmeen has had six operations, but her right ear remains a mere hole in the side of her head and the skin on her face is uncomfortably taut. Still, Hassan says the worst of her discomfort has passed.

“She has seen a lot of pain. A lot of pain. Once you throw acid and the concentrated acid just burns so quick that nerve endings are burnt along with," he said. "It's painless to start with, but once it gets infected, and you start operating on it and start doing skin transfers, the number of operations and the pain is quite a lot at this age.”

It’s been two years since acid was thrown on her, but Yasmeen still fights tears as she recalls the trauma she faced. She had been assigned to overtime at the factory where she worked in the sprawling city of Lahore, but wasn’t able to get a ride home. She was friends with her supervisor’s daughter who brought her to their house for the night.

“My friend and I had eaten dinner and gone to sleep. It was 2 a.m. when her brother came into the room where we were sleeping. He woke me up and said ‘Come with me.’ I told him ‘No, whatever you have to say to me, you can say right here.’ He started to tug at me to force me to come with him," she recalled. "He called out to his mother who said, to him ‘She’s going to tell everyone what you tried to do. Throw acid on her. Even if she dies, we’ll say we don’t know who did it.’”

Yasmeen doesn’t know who brought her to the hospital, but when she woke up, her parents were there. Mohammad Javed, Yasmeen’s stepfather, says when they first got to the hospital, she was unconscious. Her clothes were singed to her body, her hair was burnt off and her lips melted into her face. When he saw her in such an abysmal state, he thought about meting out his own justice against the young man who attacked his then 13-year-old daughter.

“I used to think I should kill him, should shoot him. But then I thought, I should do this the right way and take our case to court,” Javed said.

He filed a lawsuit against the factory supervisor and her son. The father of eight remained resolute despite threats from the defendants’ to drop the case.

“They told me in front of the judge that they’d cut me up into little pieces and feed me to dogs,” he said. “A lot people threatened me, said they’d shoot me, they called me on the phone and threatened me, but I wasn’t shaken. I fear no one but God.”

Javed fixes TVs for a living, but he had to all but close down his shop so he could travel two hours to and from the court nearly every day for seven months. He says legal fees devoured all of his savings. Still, he refused to give up, even as the defendants offered him out-of-court settlements.

“They offered me a lot of money but I didn’t get greedy," he said. "They even said they’d take Sidra in marriage, make her their daughter, but if they were the sort to make her their daughter then why would they have done this? I didn’t take any interest in their offers. I decided that I was going to see the case through to its end.”

Javed got his payoff, he says, when the mother and son were sentenced to three and 14 years in jail, respectively, in addition to steep fines.

But this case is not the norm. Waheed Ahmad Chaudhary, a lawyer representing Yasmeen, says most people can’t do what Javed did. In a lounge at the Lahore High Court, Chaudhary leans over a thick manila envelope stuffed with details of Yasmeen’s case.

“The main problem we have in these types of cases,” he explained, “(is) the trial is very slow. Sometimes it will take four years, five years.”

Yasmeen was lucky because her case was fast-tracked.

Since then, there has been another positive development for victims of acid attacks. Last year, an amendment was made to Pakistan’s penal code making acid-throwing a crime. Before that, perpetrators were charged with attempted murder. Chaudhary says that made it difficult for victims.

“In that scenario, you have to prove that the intention of that person is to kill you," he said. "And it’s easy from accused side, you can say ‘If I want to kill him or her I can take a pistol or a knife, why should I throw acid?”

The unanimous approval of the new law in December marked a watershed moment for survivors who are now seeking legal recourse in record numbers.

“I would say the more cases you bring to court despite the obstacles, the more models and jurisprudence you set,” said Valerie Khan Yousafzai, the head of the Acid Survivors’ Foundation of Pakistan.

She’s been campaigning for years to ensure acid-throwers don’t get off the hook because of legal loopholes. In just one year since the law was approved, the conviction rate against acid-throwers has risen from six to 18 percent.

Yousafzai calls that a huge improvement, given the recent upswing of horrific cases of violence reported against women. She credits the state with finally taking the issue seriously.

“You have this kind of dichotomy, you know, a paradox, of huge cases of violence but more laws, which is a clear indication that the state is saying that it’s not OK,” Yousafzai said. “Secondly, you also have had an increasing number of women raising their voice, going to court, getting justice, more convictions and that does encourage other victims and women to speak up and not to accept this victimization, for sure.”

But even after the conviction of her attackers, Yasmeen still feels victimized. She says the guilty verdict against the mother and son who threw acid on her offered a bit of relief, but no restitution.

“When I look at myself, I think their punishment is nothing,” she said. “They’re in jail, but they’re in peace. They’re still able to eat. They have no idea how hard things have been for my family because of them.”

Now that the two have filed an appeal and Yasmeen is worried her family will fall further into poverty.

This story was reported with support from the Pulitzer Center on Crisis Reporting.