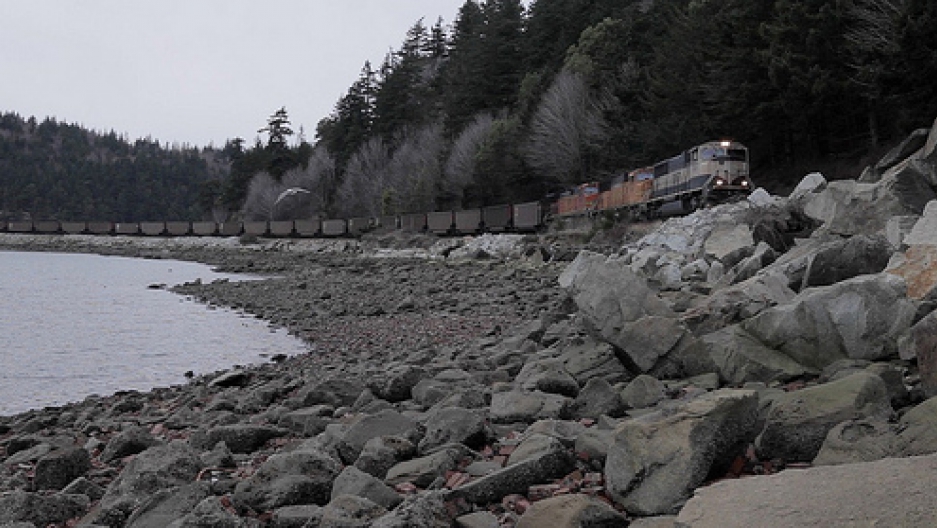 A coal train travels along Puget Sound en route to an existing coal export terminal near Vancouver, B.C. There are now five coal export terminals under consideration in Washington and Oregon to move coal from the Powder River Basin to Asia. (Photo by Kati

Editor's Note: This report is part of the Voices of Coal project, from the public media cooperative, EarthFix.

The governors of Oregon and Washington State are asking President Barack Obama’s environmental team to weigh in on controversial plans to export coal from federal lands in Montana and Wyoming to markets in Asia.

Governors John Kitzhaber of Oregon and Jay Inslee of Washington, both Democrats, have sent a letter to the White House, asking the government to consider costs to the climate and taxpayers as it reviews plans to build port facilities and rail lines. To be clear, the governors of Washington state and Oregon are not asking to block the export of coal from federal land. They’re simply raising questions.

Amelia Templeton, a reporter for Oregon Public Broadcasting, said the state officials are effectively warning federal regulators to consider their actions very carefully — not because they have a way of stopping them, but because they think the issue is exceedingly complex.

"They essentially say these decisions will dwarf any other decisions we make regarding climate change, and it will be very difficult to credibly go to the international community and say that we are fighting climate change while continuing to make federal coal available this way," she said.

The governors say the carbon dioxide from burning this coal would amount to some 240 million additional tons per year.

Templeton says the number is a bit squishy, with an independent expert saying it's more like 175 million tons and Greenpeace saying it's actually 280 tons. But everyone seems to agree there's enough coal to be exported that it would produce a significant amount of CO2.

"Just to put all those numbers in perspective — that's greater than the total admissions of Oregon and Washington combined for a year," she said. "Right now the Council on Environmental Quality recommends that any projects with greater direct emissions than 25,000 tons of carbon dioxide a year should be looked at for its climate impacts."

Some environmental groups are even saying the decisions made here will have greater impact than the decision made with respect to the proposed Keystone pipeline extension.

"Greenpeace has done some accounting and they have identified these proposals taken collectively as one of the greatest climate decisions that this country will make," Templeton explained.

The governors are also arguing that, because the federal government may be pricing the coal too low, Americans will also be subsidizing the coal purchases of foreign countries in Asia.

It remains to be seen, however, if the two Democrats will have an influence on policy, or if their letter will merely serve to draw more public attention to the project.

Templeton said the governors are giving voice to citizens of the two Pacific Northwest states — citizens who are concerned about the impact of climate change.

"One prediction for our region is that changing climate may increase the size and frequency of wildfire. We have major concerns with dams and water storage in the region that will be impacted by climate change," she said. "On the flip side though, polls have shown pretty significant support for these coal export proposals and pretty significant support on the basis of the jobs they’ll create."