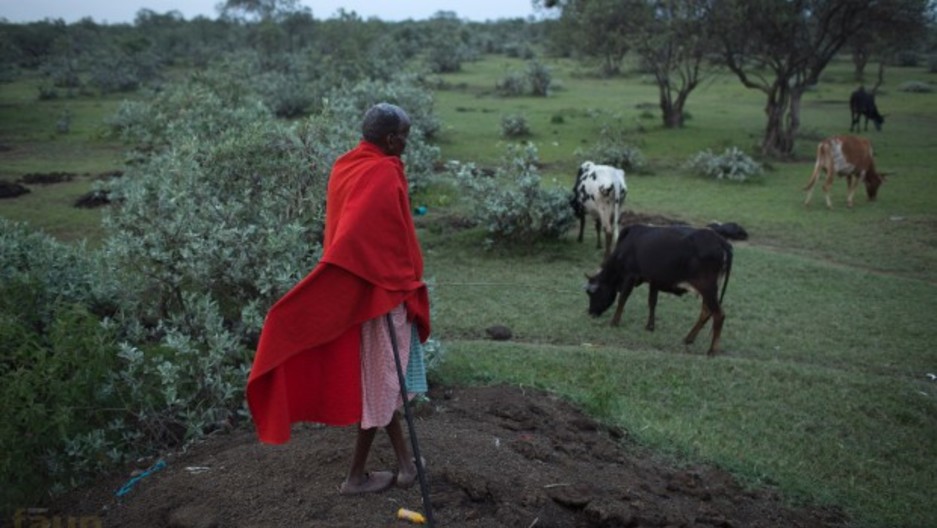 77-year-old Takaita Kariankei has lost more than 50 percent of his cattle to drought since the early 2000s. Losses like this, likely linked to climate change, have had a big impact on Maasai families and their culture.

NAROK, KENYA — The sky is pink turning to red and purple as 77-year-old Takaita Kariankei brings 50 head of cattle home for the night in Kenya’s southern Rift Valley.

Kariankei is a Maasai, a member of what’s perhaps the African cultural group most recognizable to Westerners. The Maasai are best known to outsiders for their brightly colored clothes and elaborate beaded jewellery, set against the backdrop of the African Savannah.

But ask a Maasai himself, and he’ll say his culture is all about cattle.

“A cow offers us meat, milk and blood,” Takaita said. “We treasure cows so much. We don’t take care of anything as well as we take care of our cattle.”

For Maasai men, cows also equal wealth and prestige. And despite the tranquility of this evening on the savannah, Kariankei is upset because half of his cattle are stranded on the other side of a flooded river more than 40 miles away from his watchful eye.

“The cows were just stuck there,” said Takaita’s nephew, Johana Kariankei, a 21-year-old marathon runner. “We didn’t expect the rain at this month. (But) we had a lot of rain.”

The weather has Takaita confused. This is supposed to be the dry season.

“February normally has no rain,” he said. “In April, we start hoping for rain. Now you see everything has changed.”

Not that Takaita is complaining. This region is increasingly drought-prone, so rain anytime is welcome. But to go from drought to drowning doesn’t really help.

The stress on the Maasai is apparent at the weekly cattle markets, which are the cornerstone of the Maasai economy. Sales at the markets depend on the kind of steady rains that once were the norm in Kenya. But there haven’t been steady rains for at least a decade, so Takaita sells a lot less cattle these days.

“There is a big change,” Takaita said. “Bad droughts are coming and reducing the numbers dramatically.”

Takaita has lost more than 50 percent of his cattle to drought since the early 2000s.

Losses like this have had a big impact on Maasai families and their culture. For members of the younger generation, like Takaita’s nephew Johana, it’s more and more challenging to be a pastoralist.

“You know, droughts are coming, and climate change, and a lot of cows are dying during the droughts,” Johana said. “So it’s making them to look for the other options.”

Johana himself is just visiting home for the weekend from his marathon training.

In his new line of work it’s impossible for him to wear the colorful traditional Maasai attire called the shuka. And he says his brothers and sisters have also become very westernized.

“I have a worry that the Maasai culture is really going down,” he said.

Johana’s worry is validated on new farms like the one owned by Noah Ole Ngotiek, where the first obvious sign of change is the chickens clucking in the yard. Maasai used to dislike chickens almost as much as farming.

Like Takiata Kariankei, Ngotiek was a pastoralist until a few years ago, when he too lost more than half his cattle.

“It was hard at that time,” he said. “I couldn’t get money to pay for my children’s school fees. And I didn’t get a lot of food in my house.”

So instead of driving cattle across a vast range in search of grass that often didn’t exist, Ngotiek settled onto a small plot of land, “to put a garden and see what is coming in.”

He got help with the transition at an NGO-funded community center where he learned how to dig a well, rotate crops and install modern, efficient irrigation technology to better weather droughts.

Ngotiek’s tidy rows of corn, beans and kale are the picture of a prosperous farm, but not of Maasai culture. Now 39, Ngotiek wears western clothes, watches TV on his couch and drives a car, instead of cattle.

And here in Isinya, as elsewhere in the region, many authentic Maasai traditions like music, dance and the colorful shukas are increasingly reserved for ceremonies and tourists.

Where kids still learn old ways, lament is “whatever’s good for the children”

As for Takaita Kariankei, at 77 he continues to endure the increasing hardships. Out at the spot where he left his cattle several days ago, the river is still too large for them to cross.

Takiata prevails upon his friends who have been watching his cattle to continue the favor a few more days.

It’s a peaceful place out here, where some Maasai children are still being taught to call and herd cattle. And it’s ironic that Takiata originally drove his cattle all the way out here due to lack of rain back home. Now, too much rain has prevented them from returning.

But of the two evils, Takiata is far more fearful of drought.

“I see in the future big problems with more droughts like the ones we’ve already been experiencing,” Takiata said.

Climate modellers back up the fears. They say the Maasai can expect more drought and more floods as the future brings more extreme weather to East Africa.

Of course, climate change is not the only threat to Maasai culture. And the Maasai have withstood many other challenges over the generations. But it’s the one that frightens them the most.

Given all of the headaches, Takaita offers a practical but unenthusiastic answer when asked if he'd consider farming.

“I’d consider whatever is best for the children,” he said.

Like most Maasai, Takaita is stoic amid his difficulties. He doesn’t say it, but it’s clear that the loss of his cattle and this way of life would be tremendously painful.

But Johana holds a hope for the future. As a marathon runner, has a dream to preserve the family’s pastoralist traditions.

“I can run,” Johana said. “And maybe when I win one marathon, I can buy a lot of cows.”