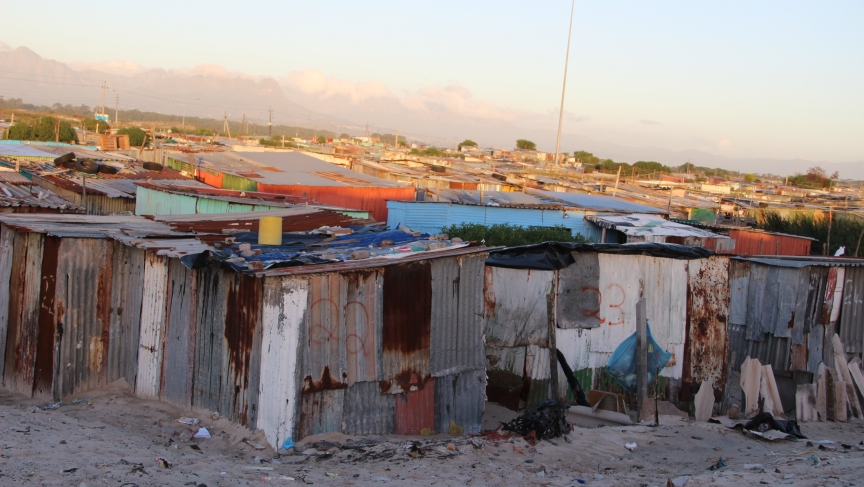 Two days ago, I went to interview a COSAT student named Amanda. She’ll be featured in an upcoming radio story, about corporal punishment and a new government initiative to get parents and teens to live together peacefully.

Amanda lives in a section of Khayelitsha that’s especially dense. To get to her home, I turned off the main, paved road and started down a bumpy dirt path that wound through a maze of metal shacks. It was so narrow that, on several occasions, my side view mirrors nearly scraped shacks on both sides. Scores of children and women passed.

“Will my car be safe here?” I asked my translator, Azola, who was riding in my car. He grew up here in Khayelitsha.

He thought for a moment.

“Here, there will be no problem,” he said.

I wasn’t completely convinced. I know Khayetlisha has a high rate of crime, including carjackings. Break-ins are also common.

“The car theft – that happens at malls and public places,” Azola said. “Here, you don’t find that kind of crime very often.”

He added, “Here, the criminals are put to death – by mobs.”

It’s a disturbing fact of life here in Khayelitsha and other dense, urban townships. Residents regularly exercise vigilante justice. Criminals and gangsters who terrorize the community are hunted down, beaten, and often burned to death, by dozens if not hundreds of people.

The most notorious form of death is something called the “fiery necklace.” It involves placing a rubber tire around the offender’s neck, and setting it alight. Children are often present to witness the spectacle.

“Violence isn’t an alternative. It is a cry of desperation,” clinical psychologist Nomfundo Mogapi recently told the Daily Maverick. Mogapi manages the Trauma and Transition Programme at the Centre for the Study of Violence and Reconciliation (CSVR), an organization that recently issued a report on vigilante justice.

“There is an increasing sense from society that the only language the government and society understands is violence,” Mogapi says.

I parked my car beside a long row of identical metal shacks. I found Amanda and her mom, and asked if I should have someone watch my car.

They thought for a minute.

“That won’t be necessary,” they said. “Here, you will have no problem.”

I spent about an hour interviewing them. Later, we walked around their neighborhood, so that I could see the area and take pictures.

When we got back, my car was right where I had left it – no scratches, no broken windows, nothing. A group of young children played soccer in the loose sand nearby.

Here, I had no problem.