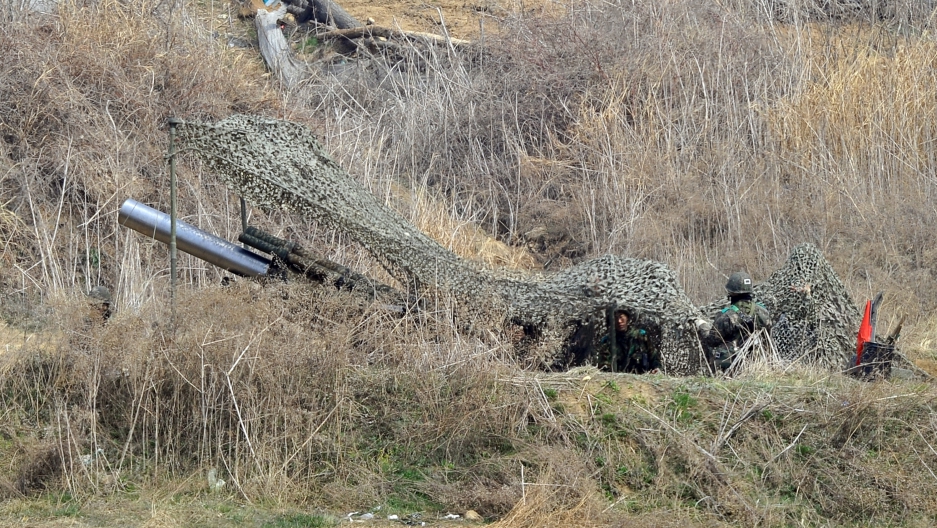 South Korean soldiers man a cannon at a military training field in the border city of Paju on April 4, 2013.
Credit: JUNG YEON-JE
Share

SEOUL, South Korea — North Korea has moved a nuclear-capable missile with "considerable range" to its eastern coast, though Seoul downplayed concerns that it could be used in an attack on the United States.

The move is being interpreted as the latest in a string of provocations by Pyongyang.

More from GlobalPost: Would China honor its commitment to defend North Korea?

The Yonhap news agency quoted an unnamed South Korean official as saying they were "closely monitoring whether the North moved it with a view to actual launch or just as a show of force against the US."

North Korea on Thursday morning local time issued another threat against the United States, saying that that its military has been cleared to wage an attack using "smaller, lighter and diversified nuclear" weapons.

Deutsche Welle cited a statement by North Korea's official KCNA news agency on Thursday as saying the general staff of the Korea People's Army had "ratified" a nuclear attack on the United States.

"We've seen today's statement by North Korea, again making unhelpful and unconstructive threats. It is yet another offering in a long line of provocative statements that only serve to further isolate North Korea from the rest of the international community and undermine its goal of economic development. North Korea should stop its provocative threats and instead concentrate on abiding by its international obligations."

The US announced shortly before North Korea's statement that it is moving an advanced missile defense system to Guam, in the Pacific, in the next several weeks — two years ahead of schedule.

US Defense Secretary Chuck Hagel has warned that North Korea is a "real and clear danger" to the US and its allies.

Japan's Asahi newspaper, meanwhile, reported that a US intelligence satellite spotted what appeared to be a long-range KN-08 missile being transported on a train in North Korea to the Sea of Japan coast.

The missile being moved was said to be a Musudan-type medium range missile.

The Musudan, also known as the BM-25, is a medium-range ground-launched missile that could be fitted with a nuclear warhead, although analysts doubt the North could do that.

Over the past month, North Korea has been carrying out regular military exercises and troop movements near its coasts, spectacles most analysts in Seoul see as a symbolic show of force rather than an immediate threat. Last week, the Korean People's Army (KPA) conducted a beach landing on its west coast, and two weeks ago completed a live-fire artillery drill in the area.

The movement of missiles to the east coast represents a different strategy than the earlier saber-rattling, which put conventional artillery pieces and tanks on display rather than more sophisticated missiles. And rather than threaten South Korean islands this time, the North claims it has the right to attack American bases in the Pacific — which it claims are within reach of its mid-range warheads.

The more likely scenario, South Korean media report, is that Pyongyang is preparing the test its mid-ranged rockets — in part to commemorate Kim Il Sung's 101st birthday on April 15.