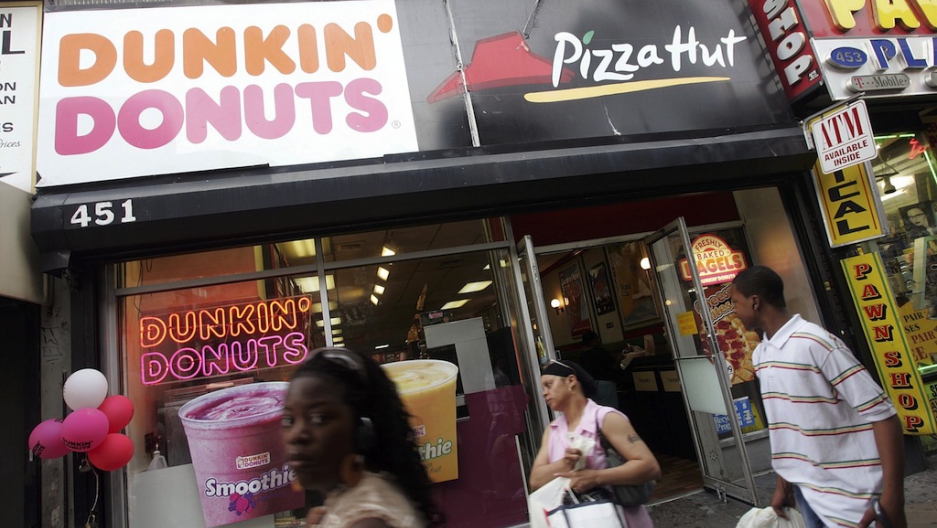 Pedestrians pass a Dunkin' Donuts and a Pizza Hut in Brooklyn, NY. On July 2006, New York City Council member Joel Rivera proposed, in an attempt to fight obesity, legislation that would limit the number of fast food restaurants in the city.
Credit: Mario Tama
Share

The one-day strike, taking place on the 45th anniversary of the assassination of Rev. Dr. Martin Luther King Jr., is organized by a labor-community coalition called Fast Food Forward that is calling for fast-food companies to pay their workers $15 an hour.

King was shot dead in 1968 while he was in Memphis to lead a march supporting sanitation workers striking for higher pay.

Currently, fast-food workers typically earn $7.25 (the New York state minimum wage) to $9 an hour, the New York Times reported, noting that $9 an hour adds up to about $18,000 a year for a full-time worker.

Fast-food workers also held a strike for higher wages in Nov. 2012, and the organizers said they expect twice as many people — more than 400 — to strike today, the New York Times reported.

“What happened in November was a very big thing in terms of seeing whether workers were ready and able to go out and strike and take risks in a way that has not happened in the fast-food industry before,” Jonathan Westin, executive director of New York Communities for Change, a strike organizer, told the New York Times. “A lot of people have been emboldened by what happened last time.”

The protest will conclude with a rally on 125th Street in Harlem.

More from GlobalPost: McDreaming in Thailand