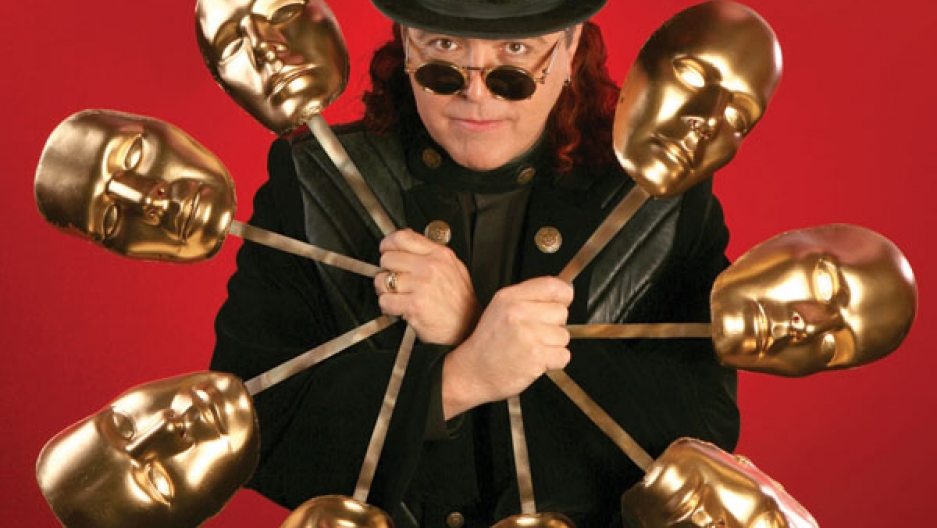 Losander is known as “the Master of Levitation.” In the most famous part of his act, a table floats impossibly, darting around as if possessed.

It’s not just his signature illusion, it’s his magical legacy. Losander sells his floating tables to magicians around the world. And they can cost thousands of dollars. At least, that was until a knock-off started appearing on Chinese websites.

At the beginning when these copies popped up like mushrooms, I got very upset,” Losander says. “They even sell cheaper than I can buy the materials. You can sell a floating table for $30,” he adds with a laugh.

Losander says the cheap copies don’t work, but the websites would have you believe you’re buying the original product. In fact, one of them displays pictures of Losander’s own tables; it even embeds Losander’s promotional video.

The website 52magic.com isn’t put off by the fact that the video has a text disclaimer warning about copies.

“It’s a sad situation, it’s like a cancer in our business,” says Kevin James, another magician, world-famous for his innovations— so much so, he’s been nicknamed ‘the inventor.’

And some of his best inventions are popping up on counterfeit sites, for instance, his “Snow Animator”- a device that produces a snowstorm of confetti from the magician’s hands. James says the problem is compounded by online retailers outside of China.

“What they’ll do, this bad dealer in France will take photos, and text off china website, translate it to French, so if you’re a young magician in France, you go to this website and you’ll go and see Kevin James snow animator, right? and the text says something very ambiguous, like “when Kevin performs this he gets a great reaction,” James says.

Big media corporations have staked out some strong protection for intellectual property, but for the individual magician, protecting ideas is tricky.

There’s a lot of legal ambiguity, according to Sara Crasson, an intellectual property lawyer and magician herself.

“If someone can watch the performance and figure out what the secret is, then that magician would lose trade secret protection,” says Crasson. “For magicians, trade secrets are a lot tougher to keep because magicians frequently do know how other magicians do their work; it’s a much more complicated thing for magicians to do.”

Okay, forget about the trick. What about just patenting the device?

“Magicians rarely actually patent devices they invent,” says Crasson. “Horace Goldin is an example of why magicians don’t do it.”

Goldin performed the ‘sawing a lady in half’ illusion in the 1920s, before it turned into a cliché. He patented the box he used—then was horrified to see the secret revealed in a series of ads for Camel cigarettes, with the slogan, “It’s fun to be fooled, it’s more fun to know.”

“The court denied his claim, and said that when Goldin had patented the illusion, he had abandoned the information to the public and so couldn’t claim this was a secret, or blame anybody for talking about it,” Crasson says.

Then there’s the issue of enforcement; Kevin James patented a gimmick that makes it look like the performer is carrying around a squirming, amputated arm. But James says his patent didn’t keep knock-offs from appearing on the market almost immediately.

James finds it so frustrating, he’s going to stop marketing his tricks. “Your patent is only as good as your ability to enforce it,” he says. “Now it comes down to ethics, if we can somehow educate magicians on what is the ethical thing to do, that is probably our best bet.”

Sometimes, that education has to happen one magician at a time. Jeff McBride is one of the most accomplished magicians in the world. His most famous routine – and you have to check out the video to appreciate it — involves an intricate series of transformations with a variety of masks.

So you can imagine McBride’s astonishment when he saw a YouTube clip of a magician in Thailand performing his entire routine, move for move, even using Jeff’s original music.

“It is not a just a duplication of one of my tricks,” he says, still amazed. “It’s not just an exact copy of one of my routines; it’s my show, my entire show… and the kabuki part, the mask production part… the guy cut and dyed his hair like me, and it was the most carbon copy sort of duplication I have ever seen. Before I had seen magic acts copy little bits or be influenced by my style, or a trick here or a trick there, but this was the whole enchilada.”

Fans were calling for the Thai magician’s head, but McBride, who runs a magic school in Las Vegas, saw a teaching opportunity. With the help of Google translate, McBride started a dialogue with the magician, who goes by the name Pat Bozo.

“It seemed like he was doing a tribute act like someone would do a Beatles, or a Pink Floyd, or a Black Sabbath tribute act,” says McBride. “He wanted to do it exactly like that. And I could obviously see that. So I didn’t want to slam the guy, but what he was doing wasn’t right— and he’s on television doing it.”

“And now he knows that people have issues with that. And it’s time for him, now that he’s had this experience, to come up with some original magic, and I’ll even help him. That’s fine, that’s my job as a teacher.”

McBride says Bozo took the video down. Beyond that, he’s encouraged by another development from the East: In South Korea, which is experiencing a magic renaissance, professional magicians have started an awareness campaign called “Do Not Copy the Magic.”