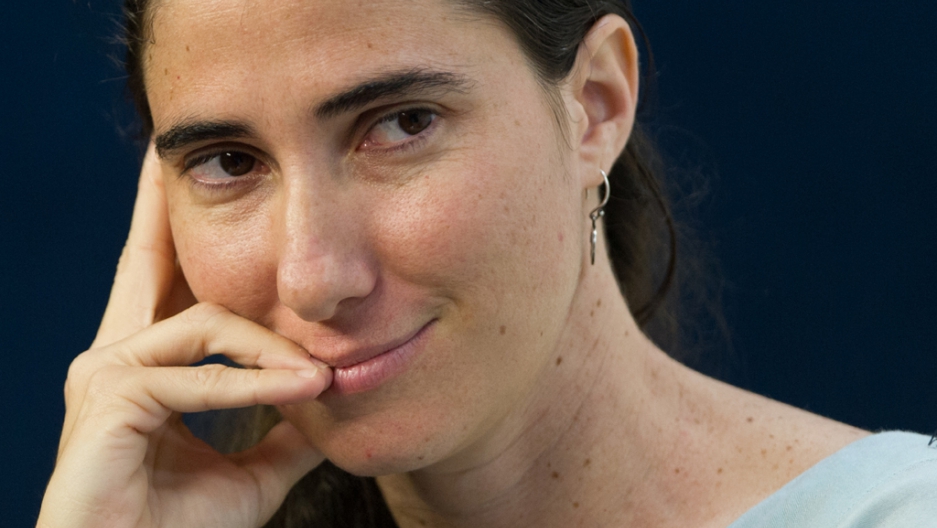 Now the question is: What happens when they return home?

Famed blogger Yoani Sanchez says she plans to launch a new media company after completing her 80-day trip through Latin America, the United States and Europe. Activist Eliecer Avila wants to form a political party to “negotiate” with the government. Another opposition figure, Ladies in White leader Berta Soler, has vowed to continue going abroad to “seek solidarity” for her cause.

But even if the Castro government is allowing dissidents to travel, speak freely and raise money abroad, there’s little to indicate that a warm reception awaits them at home. Many observers will be watching to see if the activists face retaliatory measures from Cuban authorities, particularly if they attempt to launch new political organizations or protests.

The first activist to return will be Rosa Maria Paya, whose father Oswaldo Paya was killed in a car crash last July. She has spent the past several weeks lobbying for an international investigation into the crash, alleging that the government played a role in her father’s death and has orchestrated a sinister cover-up since then.

Angel Carromero, the Spanish politician who was the driver in the fatal crash, was convicted in Cuba last year of what amounts to involuntary manslaughter, then allowed to return to Spain and serve his four-year prison sentence at home. But after meeting with Paya in Spain, he changed his story, telling an interviewer that Cuban government agents were indeed to blame for the crash.

Carromero has not filed an appeal to his conviction, nor repeated his accusations elsewhere in public. But if the goal of Paya’s trip was to put pressure on the Cuban government and raise doubts about the circumstances of the crash, she was successful.

Paya’s daughter took her campaign to the United Nations Human Rights Commission in Geneva, petitioning for an investigation, despite objections from Cuba and several of its allies. A bipartisan group of US senators have backed her, and Paya was also received by sympathetic audiences at the European Parliament in Brussels.

“My goal was to bring together all the support and solidarity and begin to channel it into something that can be more effective,” she told the Spanish news agency EFE, saying she would return to Havana in a matter of days. “In that sense, I’m more or less satisfied, even though I won’t be completely content until there is an international investigation and we obtain our rights in Cuba.”

Cuba may attempt to punish Paya and other critics when they return, but by allowing them to travel and meet face-to-face with foreign politicians, newspaper editors and activist groups, any retaliatory measures would probably raise an even greater international outcry.

There has been no indication that the government will try to block the dissidents from coming home. But when blogger Yoani Sanchez was asked what she would do if her return were barred, she said she would be “the first person to board a raft to get back into Cuba.”

More from GlobalPost: In the shadow of El Comandante

During stops in Brazil, Mexico and New York, Sanchez faced groups of hostile protesters who tried to disrupt her events and prevent her from speaking. But the boorish behavior only seemed to garner more support for Sanchez, even among groups which might otherwise be sympathetic to Cuba’s government but were disturbed by the sight of hecklers trying to prevent her from speaking freely.

Less clear is how successful she may be with plans to start a media company back home. Although her blog is no longer censored by the government, Sanchez has faced rough treatment when she has tried to take her activism beyond her blog.

Sanchez’s trip has also given the authorities new ammunition for their caricature of her as a tool of foreign interests, as she has met in Washington and Miami with anti-Castro militants and Cuban-American politicians who oppose any easing of the US embargo.

But Sanchez has also used her megaphone to criticize the 50-year-old trade sanctions against Cuba, urging greater engagement with the island, not continued isolation.

Speaking at Miami’s Freedom Tower on Monday, Sanchez asked Cuban exiles to move past the political divisions that have long split families and served as a kind of tropical Berlin Wall “made not of concrete nor brick, but of lies, silence and ill will.”

“In the Cuba that many of us dream of it won’t be necessary to clarify what type of Cuban you are,” she said. “We’ll just be Cubans, period.”