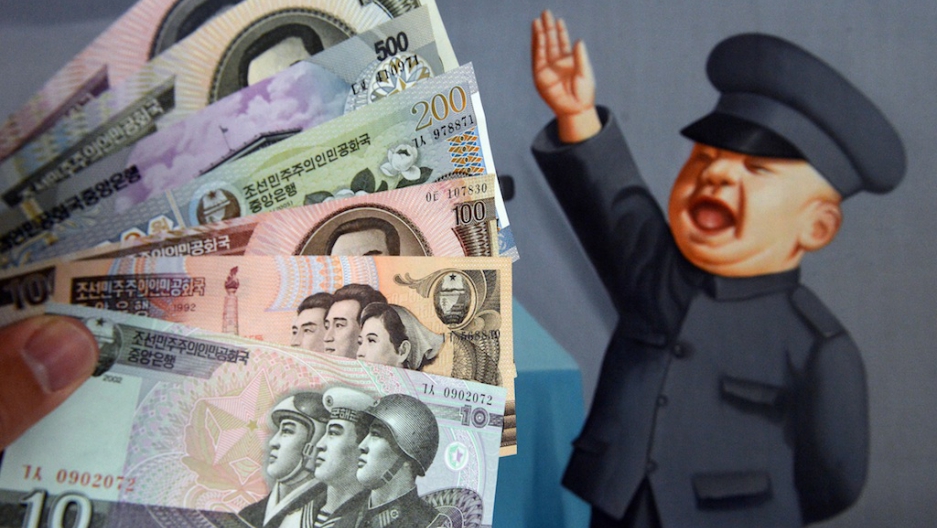 This photo illustration shows North Korean money purchased at a Chinese border town and displayed in front of a painting in Beijing on March 6, 2013. China is North Korea's largest trade partner and main ally.
Share

North Korean threats to launch a nuclear attack on the United States have left its closest ally, Beijing, in a difficult position.

Under a treaty signed half a century ago, China is obliged to “render military and other assistance by all means at its disposal” in the event North Korea comes under “armed attack by any state.”

According to the Council on Foreign Relations, China has been ambivalent about its commitment to the Sino-North Korean Treaty of Friendship, Cooperation and Mutual Assistance.

But as tensions on the Korean peninsula escalate, China is likely to come under increasing pressure to state its position.

The Pentagon confirmed earlier on Wednesday that an advanced ballistic missile defense system was being sent to Guam to protect US interests in the event of a North Korean attack.

In a statement published by the North's official KCNA news agency, the General Staff of the Korean People's Army said war with the United States could break out "today or tomorrow."

China, along with South Korea, would bear the brunt of hostilities in the region and Beijing is no doubt working around the clock to prevent such an event.

As the largest provider of food, fuel and industrial machinery to North Korea, China is seen as wielding the greatest influence over the hermit kingdom.

But its ability to control its aggressive neighbor is overstated, experts say.

"In general, Americans tend to overestimate the influence China has over North Korea," Daniel Pinkston, a Northeast Asia expert at the International Crisis Group, was quoted by the Council on Foreign Relations as saying.

While Beijing is no doubt furious with Pyongyang over its provocative nuclear tests and fiery rhetoric, it cannot afford to turn its back on the North. If Kim Jong Un's regime were to collapse, millions of North Korean refugees would likely flood across the border into China.

It’s a factor that hasn’t been lost on the North Korean leadership.

“North Korean leaders appear to have used this interest to neutralize their country’s growing economic dependence on China; the greater North Korea’s dependency, the more fearful Chinese leaders may be that a sharp withdrawal of PRC economic support could destabilize North Korea,” according to a 2010 Congressional Research Service report.