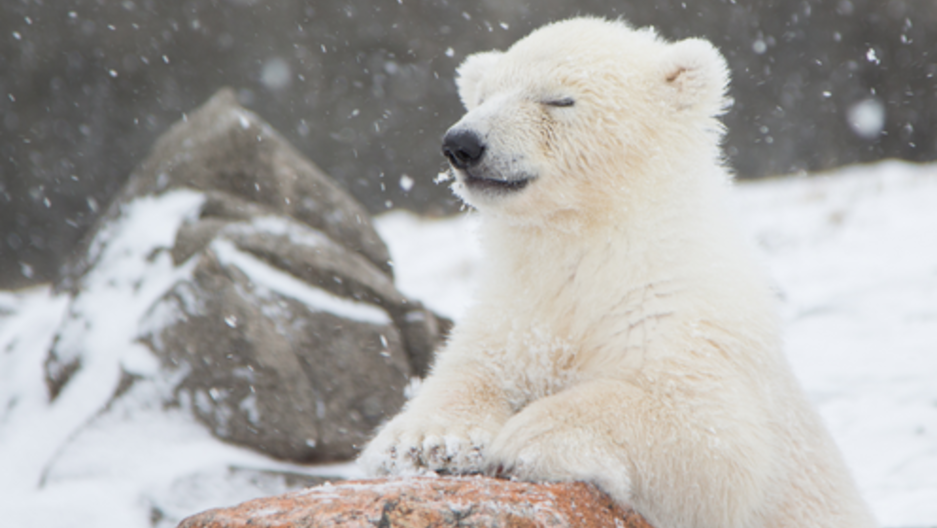 Climate change is making life difficult for polar bears across the world. But an orphaned polar bear cub from Alaska is about to get a new home and a new sibling at the Buffalo Zoo in upstate New York.

The Buffalo Zoo has been hand-rearing its own polar bear cub, Luna, after the cub's mother wasn't behaving properly toward the cub, said Donna Fernandes, president of the Buffalo Zoo.

"First time mothers often don't know what to do. Something plops out of you and 'oh my God, what’s that, what am I supposed to do?' That happens in wild populations as well as captive populations," she said. "She began to pace and hold it just by one paw, holding it incorrectly by its head and we just got really nervous about what we where witnessing. So we’ve been hand-rearing her for four months."

But now Luna's about to get a friend — at least that's the plan. An orphaned bear cub is living at an Alaskan zoo for the next 30 days or so, but is expected to move to Buffalo after that.

The cub, Kali, was turned over to the U.S. Fish and Wildlife Service after his mother was shot, Fernandes said.

The bear's bound for Buffalo just for the short-term — because of Luna, basically.

"He's just here for a number of months to socialize with our cub, but eventually he’ll be sent to one of the brand new facilities," Fernandes said.

For the two cubs, the primary tasks will be teaching them to swim, and to navigate on their own.

"The pools we have picked out have areas that we can change the depth of the water, because ordinarily the female would supervise the swimming of her cubs and if they got into trouble she could retrieve them," Fernandes said. "But without having a mother in with them we have to make sure that they're in a safe pool situation at all times."

Feeding them and keeping them warm are, obviously, important too. Already, Luna's developed claws and grown her teeth, so it's dangerous for keepers to rough-house with her. Having Kali in the same space allows the two of them to play together.

"One of the big problems is, you don't want them to become too imprinted on humans, so having each other or peer-raising them will help so that they definitely learn bear-like behaviors. Because as they grow, they become obviously much more dangerous," Fernandes said.

In the next couple months, keepers won't be allowed into the enclosure with Luna any more. She's already transitioned to a meat-based diet, and grown so large that it's rarely necessary for humans to have direct and intimate contact with her. And in the next two months, it likely won't happen at all.

Eventually, Luna will weigh some 600 to 700 pounds. Kali, though smaller now, Fernandes said, will grow to be perhaps as much as 1200 pounds.

"So he’s got a little catching up to do. But because the males are generally bigger, I'm sure he'll be putting on weight at the zoo in Alaska as well as when he gets here. He’ll making up the difference pretty quickly," she said.

Fernandes speculated that Kali may be underweight because of the condition his mother was in, in the wild. Climate change has made life extraordinarily difficult for wild polar bears.

The hope is that seeing these cubs in zoos in Buffalo and around the world will help people understand just how precarious the situation in the wild is for polar bears.

"Imagine being the Canadian Fish and Wildlife (Service), or the U.S. Fish and Wildlife (Service) and being forced to shoot these things because the sea ice is melting and there’s so many orphans out there," she said. "So our exhibit experience ends with this messaging about things you can do at home. You know, simple changes in lifestyle — if we all made them — would totally reduce our carbon footprint significantly."