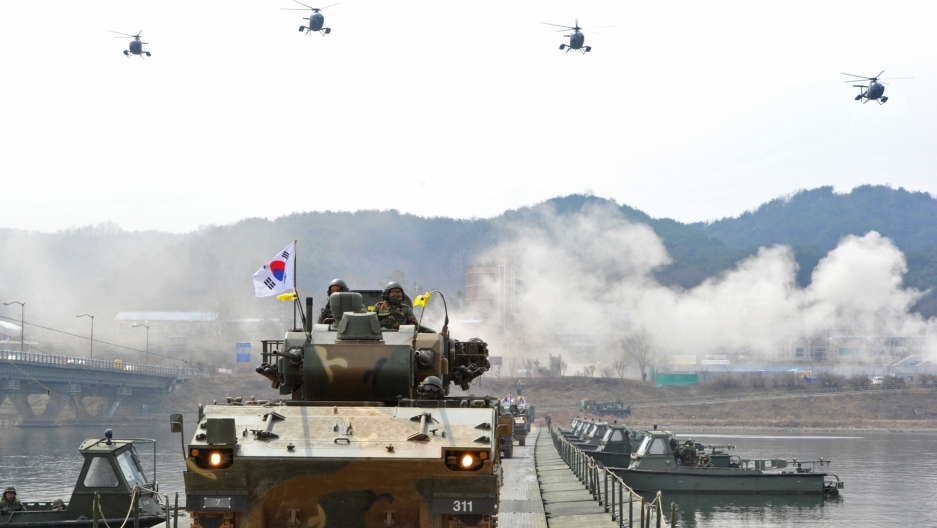 South Korean anti-aircraft armored vehicles move over a temporary bridge during a river-crossing military drill in Hwacheon near the border with North Korea on April 1.
Credit: Kim Jae-Hwan
Share

SEOUL, South Korea — North Korea has said it plans to reopen its nuclear facilities — a move that would likely serve to further unnerve the country's foes in the region and Washington.

The state-run KCNA news agency announced the plan on Tuesday, saying North Korea would reopen shuttered facilities, including the 5-megawatt Yongbyon reactor, which closed in 2007.

Yongbyon served as a source of plutonium used for weapons, noted the BBC.

KCNA quoted a Pyongyang government spokesman saying the move would "bolster the nuclear armed force both in quality and quantity."

South Korea's staunch ally, the United States, meanwhile, ramped up its military presence Tuesday deploying a second warship, USS Decatur, off the Korean Peninsula. That came after the Pentagon announced on Monday it had deployed the USS John McCain, used for ballistic missile defense.

China — the North's only major ally — said it regretted the announcement and called for all parties to remain calm amid rising tensions on the divided Korean Peninsula.

"We have noticed the remarks of the DPRK and express our regret," said Beijing's Foreign Ministry spokesman Hong Lei. "We call on relevant parties to keep calm and exercise restraint."

More from GlobalPost: US sends second warship to Asia-Pacific as tensions rise with North Korea

In South Korea, observers have played down some previous threats from the North. But now some analysts say North Korea's decision to restart its nuclear facilities could be more than just hot air, and that the move should be taken separately from Kim's war rhetoric over the past two months.

"I have to say this is one of the most dangerous moments since 1953," Shi Yinhong, a professor of international relations at Beijing’s Renmin University, told The Los Angeles Times' World Now blog, referring to the end of the Korean War.

Experts say that the isolated country has made it clear — over two decades of on-and-off talks since the early 1990s — that its nuclear program is nonnegotiable, and a part of their overall defense strategy of survival.

That attitude is reflected in the blistering statement put out by the Central Committee of the Korean Workers' Party (KWP), in its plenum meeting, on Monday. The body announced that nuclear weapons are "the nation's life," and not a "political bargaining chip."

On the other hand, the delegates elected a well-known reformer, Pak Pong Ju, who was the North's prime minister from 2003 to 2007 and also held posts developing light industry.

North Korea watchers are in disagreement whether this is a sign the regime could prioritize economic openness in the future, or whether Pak's just a figurehead without much power.

"It could be a sign of reform and perhaps a sign that the economy and its development, rather than war and ensuing destruction, will be given priority," said Felix Abt, the Swiss former head of the European Business Association in Pyongyang, who ran a number of companies in North Korea when Pak was previously prime minister.

In response to North Korea's continuing diplomatic feints, China reportedly placed its troops on "highest alert" near its shared border, soon after Kim claimed that his country was now in a "state of war" with South Korea.