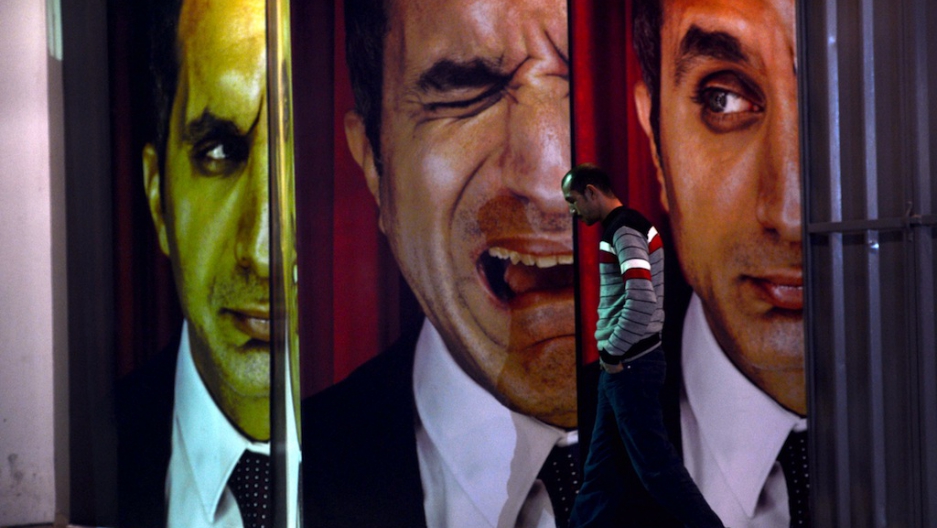 An Egyptian walks past posters of Egyptian satirist Bassem Youssef outside a theater in Cairo on January 22, 2013.
Credit: KHALED DESOUKI
Share

After listing Egypt's myriad post-revolution problems — attacks on women, high unemployment, and a precipitous drop in tourism — Stewart marked the country down as a "work in progress."

But then why is Egypt's chief prosecutor going after a comedian like Youssef?

"What, has he been sabotaging Egypt's infrastructure, or harassing Egyptian women on the streets, or unemploying Egyptian people?" Stewart rhetorically asked.

Last week, Egyptian officials issued an arrest warrant for Youssef, along with four other critics of the Muslim Bortherhood-aligned government, accusing the comic and critics of instigating violence.

The Egyptian chief prosecutor's investigation into Youssef is the most high-profile inquiry into one of President Morsi’s critics since the former Brotherhood leader took office last summer. Pro-democracy activists and government critics say it is one of the more blatant attempts to stifle free speech in post-revolution Egypt, and a harbinger for darker times ahead.

“It’s part of this trend of arresting and persecuting activists and artists,” Aya Omar, a 20-year-old student in Cairo, told GlobalPost, pointing to a spate of detentions of anti-government activists in recent months.

Washington has echoed that sentiment.

On Monday, US State Department spokeswoman Victoria Nuland said the arrests show “evidence of a disturbing trend of growing restrictions on the freedom of expression.”

Yet according to Morsi’s conservative Islamic Freedom and Justice Party, defaming religion is a serious offense, “a violation of Egyptian law, culture and values,” the party said in a statement Tuesday.

The party went on to denounce the State Department’s critical statement.

The US government “is welcoming and condoning defamation of religion,” the Brotherhood also posted on its Twitter account Tuesday.

Youssef is now out on $2,200 bail after being interrogated for five hours. He tweeted on Sunday: "Touched by people's support and media attention, however, there are many more activists being prosecuted that deserve to get that support."

Now it appears there is a new charge against Youssef. He tweeted on Monday: “A new complaint against me has been referred to state security prosecution, for spreading rumors and false news, and disturbing public tranquility after the last episode.”

At the end of Monday night's Youssef segment Stewart spoke directly to Morsi:

“So Bassem Youssef pokes fun at your hat and your lack of promised democratic reforms," Stewart said. "What are you worried about? You’re the president of Egypt, you have an army. He has puns and a show, you have tanks and planes - we should know, we still have the receipts. Look, silencing a comedian doesn’t qualify you to be president of Egypt, just president of NBC.” Then Stewart added, “When you are actually powerful, you don’t need to be petty.”

Here's a clip of Stewart on Monday night's show: