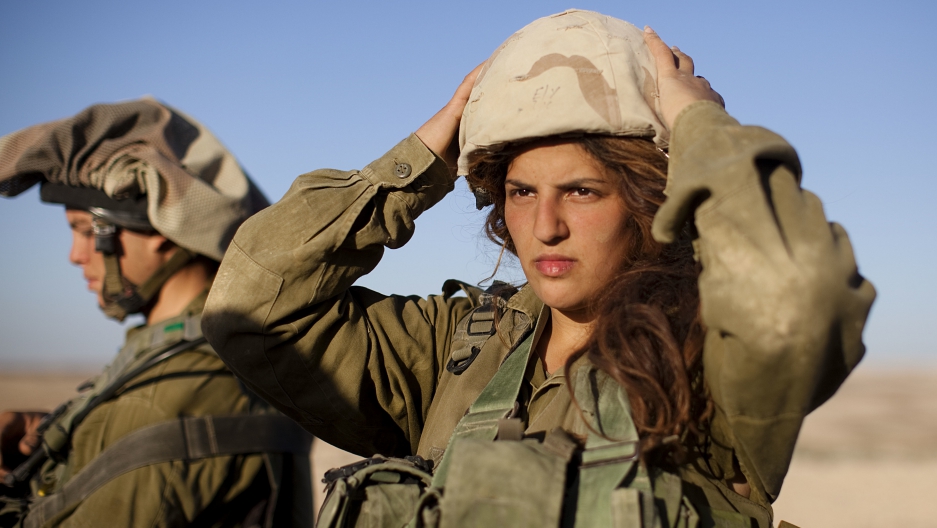 NEVATIM AIR FORCE BASE, NEGEV DESERT, Israel — Seen from behind dressed in identical green coveralls at this windswept military installation, Maya and Yaniv look like two peas in a pod.

The pod in this case is the cockpit of a C-130 Hercules military cargo plane, on which Maya, a female, is a navigator and Yaniv a male pilot.

Maya and Yaniv aren't your average Israeli draftees. They're part of an elite group of aviators whose full names and daily routines can't be disclosed. They fly a fleet of combat-ready cargo planes used to transport people and material on missions ranging from open warfare to humanitarian air drops and, these days, for what's euphemistically known as electronic warfare.

They also serve in the only military that drafts women into regular service. The Israel Defense Forces, the IDF, have received unusual attention as a model since then-Defense Secretary Leon Panetta lifted the US military’s ban on women in combat two months ago.

But although Israelis are used to the idea of female soldiers, they still face obstacles advancing in a military in which they make up only a small fraction of the country’s battle-ready forces.

According to the IDF, although 92 percent of positions in the armed services are open to women, only 5 percent of female soldiers serve in combat roles.

That wasn’t the vision of Israel's first prime minister, David Ben-Gurion, who explicitly demanded that women serve equally to men. The army "is the supreme symbol of duty,” he wrote in a 1952 letter, “and as long as women are not equal to men in performing this duty, they have not yet obtained true equality."

Women had been fighting for Israel even earlier. They famously flew combat missions in the 1948 War of Independence. In 1956, 24-year-old Yael Rom co-piloted the lead C-47 of a sortie that launched the Suez War by dropping Israeli paratroopers at the Mitla Pass.

Despite Ben-Gurion’s wishes, however, flight training for women was suspended at an undetermined moment in the mid-1950s. The next woman to receive her pilot's wings was Lt. Roni Zuckerman in 2001, after a prohibition on women pilots was lifted in 1995.

Back at the Nevatim base, navigator Maya says knowing pilot school is a possibility can make a huge difference.

"High school girls didn't [automatically] get summoned for the air force," she explains, "so when I got called up I requested it."

A thoughtful, soft-spoken 23-year-old, she was drafted four years ago and says being stationed in the air force is “among the most meaningful service you can perform.”

The air force remains the most elite and possibly most storied branch of Israel's defense forces. It’s also one of the most demanding. Of the 300 recruits who started pilot's training with Yaniv when he was drafted seven years ago, only 42 successfully completed the course. Not one was female.

However, all six young women who started in Maya's class three years later completed the course and were commissioned into the air force.

Today, all Israeli high school seniors who qualify for the air force are automatically sent summonses.

Yaniv, 25, who regularly flies with women, says the new process is having an effect. “The process of integration of women isn’t just an army matter, it’s also part of socialization,” he says. “The more girls in the air corps, the more high school girls ask about it, the more get in, and the more it's accepted as a matter of course that there are girls in the service."

Both Maya and Yaniv are committed to nine years of service after their three years of training. Neither seem troubled by the prospect, and both say they’re considering military careers after their obligatory service ends.

"It's not a Soviet prison!" Yaniv says. "It may be stressful, but this is a good place to be."

The statistics paint only a partial picture, however. As in the US armed forces, some positions that put personnel in extreme physical danger, such as field medics’, aren’t always classified as combat roles.

Also like in the United States, some of the most select military jobs and elite units remain closed to women.

"I think if a woman can keep to the exact same standards as a man, she should be allowed in," he says, about US military special units. "It hasn't happened."

Israeli servicewomen’s latest worry is that the government’s current push to draft ultra-Orthodox young men after 65 years of exemptions may come at the expense of women's gains.

In an interview with the Los Angeles Times, Maj. Gen. Orna Barbivai — the most senior woman in the army who commands the personnel department — said the military must handle the issue delicately.

“Combining the ultra-Orthodox draft with meaningful service for women will take careful, wise implementation and require a balance between the draft and universal values of equality," she said.

Despite the concerns, Maya says she feels no sexism in the military. "I feel that any girl who wants to serve in an important combat role, something she can physically support, can do it."

"We are a relatively young country, and I think we have advanced nicely,” she adds. “It’s a process, things are constantly being re-examined and advanced.”

Somewhere, David Ben-Gurion may be smiling.