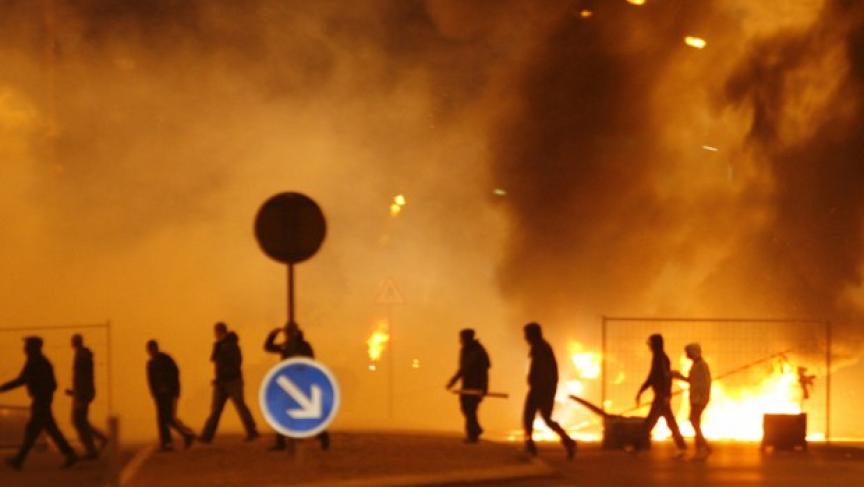 Hooded youths carrying sticks walk in front of a burning car outside a housing project during clashes one day after two youths died in an motorbike accident with a police car in Villiers le Bel in the northern suburb of Paris November 26, 2007. REUTERS/Pascal Rossignol (FRANCE) - RTX4388

In 2007, riots erupted in the Muslim immigrant suburbs around Paris. More than 100 police officers were injured. Authorities tried to get leads by paying anonymous witnesses. Amy Bracken has the story of one young soccer player who was arrested and spent nearly two years in prison before being acquitted.

Mara Kanté walks down the streets of Villiers le Bel wearing a white Muslim tunic pulled over his soccer attire. Everywhere, people greet him. Some know him, but others just followed the press coverage of his years in jail.

One woman congratulates him for his recent book, "Préjugé Coupable," or "Prejudged Guilty." It's about doing time for a crime for which he was ultimately cleared.

Sipping mint tea at a café, he tells me that before all that happened, he played soccer every day, trying to climb the ranks of the European leagues.

Like many in Villiers le Bel, Kanté comes from a Muslim immigrant background. He says back in 2007, there was simmering tension between young people there and the police. "There is always a kind of frustration," he says, "because every day residents are harassed and can't say anything. It was inevitable that one day people would revolt."

The trigger was the death of two teenagers – a police car collided with their motorbike. "The two boys who died were like my little brothers," Kanté says. "They were old family friends. The emotion was enormous."

That night, riots broke out. Kanté was among those who took to the streets. He says he just went out to see what was happening, not to make trouble. Hundreds of police and firefighters were called to the scene. And more than a hundred sustained injuries, many from buckshot.

After the riots, then-president Nicolas Sarkozy said those responsible for shooting at police would face charges of attempted murder.

But authorities had no leads. In Villiers le Bel, no one was talking. So the police tried to recruit witnesses.

"A few days after the riots, the investigators sent out flyers calling for witnesses to come forward. They promised anonymity and a reward for testimony," says Aurélie Foulon, a reporter for the newspaper Le Parisien and co-author of Kanté's book.

It was a reward of several thousand dollars — in a town where incomes are low and unemployment high.

Soon, someone came forward, accusing Kanté of having a gun at the riots — something he denies. Kanté was arrested, along with dozens of others in a sweep of the neighborhood. Then another witness apparently popped up, saying he'd seen Kanté shooting a gun.

Foulon says at the time there was no evidence other than anonymous sources. "No one knew who was testifying," she says, "so Mara couldn't defend himself. And it turned out that the second witness, who no one knew, and the accuser, who no one knew, were the same person."

Kanté's defense eventually figured out that the accuser, and the corroborating witness were the same guy. But in the meantime, another detainee implicated Kanté.

Kanté was charged with attempted murder and kept in pre-trial detention for almost 29 months, 11 of them in solitary.

This was all made possible by legislation that France had adopted after the 9/11 attacks in the US. One law permitted witnesses to give anonymous testimony. Another authorized the payment of police informants. But according to critics, authorities crossed a line when they combined the two laws after the 2007 riots.

"The police appealed to the population to testify in exchange for money," says Nicolas Bonduelle, the president of the national judge's union. "It's okay to pay informants but not general witnesses. Here we saw witnesses who were testifying anonymously, and no one knew if they were being paid. That's unacceptable."

Some say there's a need for such aggressive measures. Jean-Pierre Schosteck, the lawmaker who introduced the anonymous witness bill, says authorities have to break through the wall of silence in places like Villiers le Bel.

"You can see, especially in public housing in the suburbs, that the witnesses don't want to testify," he says. "They're afraid. We must allow them to tell what they know without risking their lives."

By the time Kanté went to trial, the detainee witness had recanted, and the case against him fell apart. Kanté was freed in July 2010 and cleared of all charges more than a year later.

Two others who were tried along side him remain behind bars. They were prosecuted using the same strategy of offering payment for anonymous testimony — a strategy that Judge Bonduelle calls abhorrent.

"It is urgent that something be done so that this never happens again," he says.

Kanté has petitioned the government for some compensation for his lost years. France's Justice Ministry said it's reviewing his case. But that was more than a year ago. In the meantime, Kanté is hoping he can somehow get his soccer career back on track.