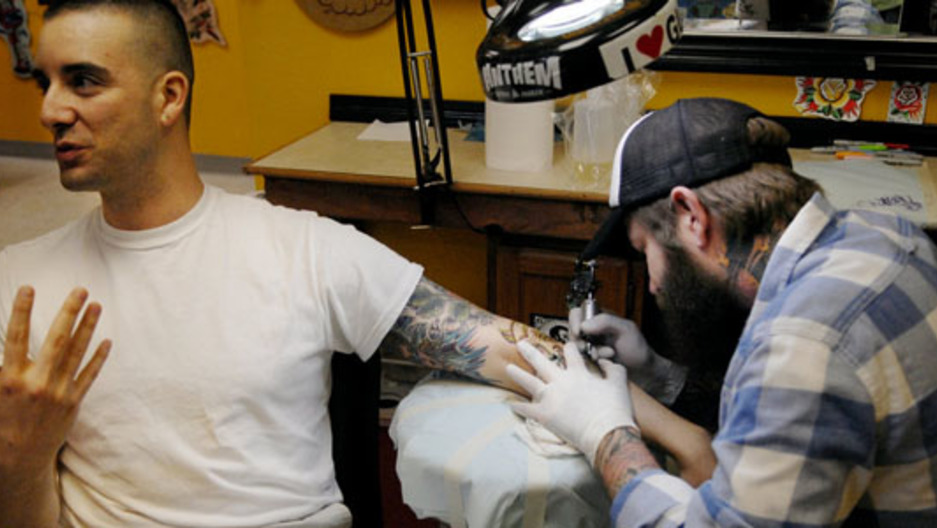 Ol’ Skool Tattoos in Brownsville, Texas looks like pretty much any other tattoo shop in America. The walls are adorned with images you can choose from – skulls, snakes, hearts, and more than a few bare-breasted women. There’s also a lot of artwork representing Mexico.

David Delgado was going this direction. Delgado was born in Mexico City and was getting a tattoo that reads “Hecho en Mexico,” or Made in Mexico. It’s a popular tattoo down here these days.

“It’ the stamp that happens, or is put on items that get exported out of Mexico. I’m a direct export, so it’s a literal translation.”

I asked Delgado why he was choosing to express his cultural heritage in permanent ink on his skin.

“Why do people pay for art that you hang on the wall?” he answered. “I think tattoos end up being like walking art. So it becomes a gallery of a person. And pretty much I think if you ask somebody every tattoo has a story or has a meaning behind it.”

Daniel Aguilar, a graduate student at the University of Texas at Brownsville, has been researching the meanings of tattoos along this stretch of border called The Rio Grande Valley. While tattoos have become increasingly mainstream throughout the US, they’re also still associated with youth gang culture. Aguilar argues against this stereotype. He took me on a tour of some local tattoo shops in the area.

If you’re wondering, Aguilar is one of those people.

Life along the border in early 21st century America is more complex than what most of us know. Not long ago, the border used to be one united place, with Mexicans and Americans easily flowing across back and forth.

Today, US border patrol agents swarm the area. Towns on the Mexico side battle drug-related gang violence. People are afraid to go south, and it’s hard for people to come north. And families in Texas can include a complicated mix of US citizens, residents, and undocumented immigrants.

“Yeah man, I tattooed this truck driver one time," said Jake, a tattoo artist who didn’t provide a last name. "And he got this big semi-truck on his back, and there’s a grim reaper holding onto the cab and there was just like kilos of cocaine flying out the back of it. That’s what he got, I think that reflects border life pretty to the T.”

There are also a lot of requests for religious artwork in this area, which is deeply engrained in Catholicism. The Virgin Mary and the grim reaper are two popular choices.

Daniel Aguilar has an angel on his forearm. When we were visiting tattoo shops together, he got the bug for more ink; he decided to add the devil.

“As a former Catholic, I think I identify well with Lucifer, bringer of light. He has killed 10 people in the Bible, whereas God has killed 2 million-plus in the Bible. Lucifer never turns anybody away, he does what he’s told. God tells what him to do and he does it. I would consider him one of the most obedient angels.”

Some of religious tattoos also have a border twist. Christopher Daniel de Leon, a tattoo artist in the nearby city of Edinburg at Flaming Heart Tattoo, told me about a Border Patrol agent who once requested the archangel Michael on his chest.

“The traditional image is Michael standing over the devil, the fallen devil. But in this case, he wanted me to go ahead and draw it up where he was actually suited as a border patrol (agent). And that was a different twist on something, he was proud of it and all that, so I dug it.”

De Leon also gets a lot of requests for Aztec art and sugar skulls, the colorful icons associated with the Mexican holiday The Day of the Dead.

“So in a way, it kills two birds with one stone, like hey, I want to do something with the Mexican culture but at the same time want to look bad ass,” said de Leon.

De Leon said there are “a lot, a lot” of tattoo artists here in the Rio Grande Valley. He didn’t know exactly why there are so many, but from his perspective, it’s a way to make a living as an artist. He showed me a binder of some of tattoos he’s done; they were elaborate, unique, impressive drawings.

But in this case, the artist’s canvas feels pain. De Leon is well aware of this, and he appreciates the trust his clients give him to display his art.

“Because that’s like total commitment, once it’s on there, that’s it. Once you get it done, you have to live with it.”

[All photos by Brad Doherty, unless otherwise noted.]