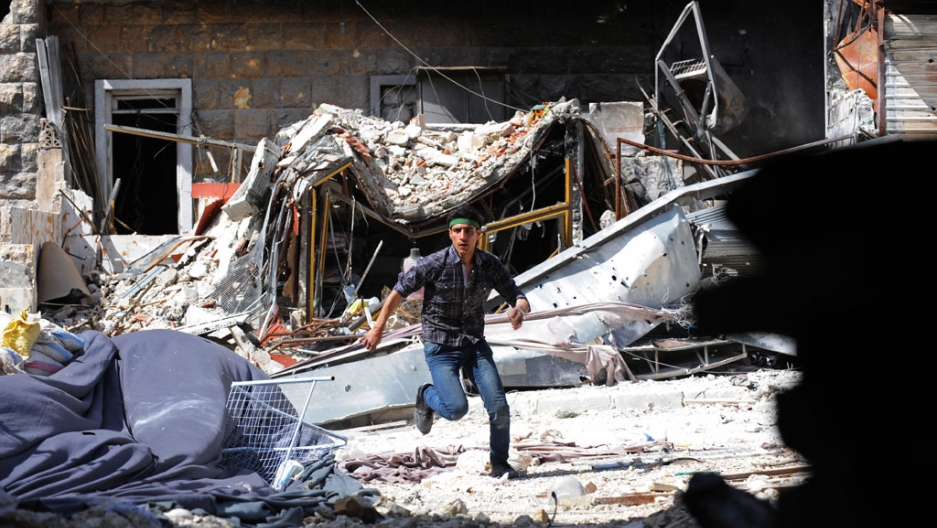 A Syrian opposition fighter runs for cover from Syrian army snipers during clashes in the northern city of Aleppo on March 27, 2013. March was Syria's deadliest month, according to the Syrian Observatory of Human Rights, with over 6,000 people killed.
Credit: BULENT KILIC
Share

More than 6,000 people were killed in March in the bloodiest month yet in Syria's civil conflict, according to the Syrian Observatory for Human Rights.

The Britain-based activist group released the numbers on Monday, saying it had recorded 6,005 deaths last month.

"At least 6,005 people were killed in March. A total of 2,080 were civilians, among them 298 children aged under 16. Another 291 fatalities were women," said the Observatory's director Rami Abdel Rahman.

As Reuters noted, the group opposes Syrian President Bashar al-Assad's regime, but has recorded human rights violations on both sides of the conflict.

The group has documented 62,554 killed in the conflict so far.

"But we know the number is much, much higher," Rahman told Reuters. "We estimate it is actually around 120,000 people. Many death tolls are more difficult to document so we are not officially including them yet."

Of those killed in March, at least 2,000 were rebel fighters, Rahman told Agence France-Presse. Around 588 of the rebels had names the group could not verify, including non-Syrian fighters.

The number of dead in Assad's prisons are also unknown, making a total death toll harder to verify. The United Nations' estimated death toll hovers near 70,000.

More from GlobalPost: On Location Video: Syrians in Exile

According to Al Jazeera, the UN is considering all options, including a peacekeeping force, in case the Syrian government falls.

"The UN always anticipated playing a humanitarian role," wrote Al Jazeera. "But now it concedes it may have to go beyond that - as most countries have shown little interest in getting involved."

Hundreds of thousands of Syrians have fled their country during more than two years of conflict. Hear three of their stories in GlobalPost's intimate video report from Lebanon: