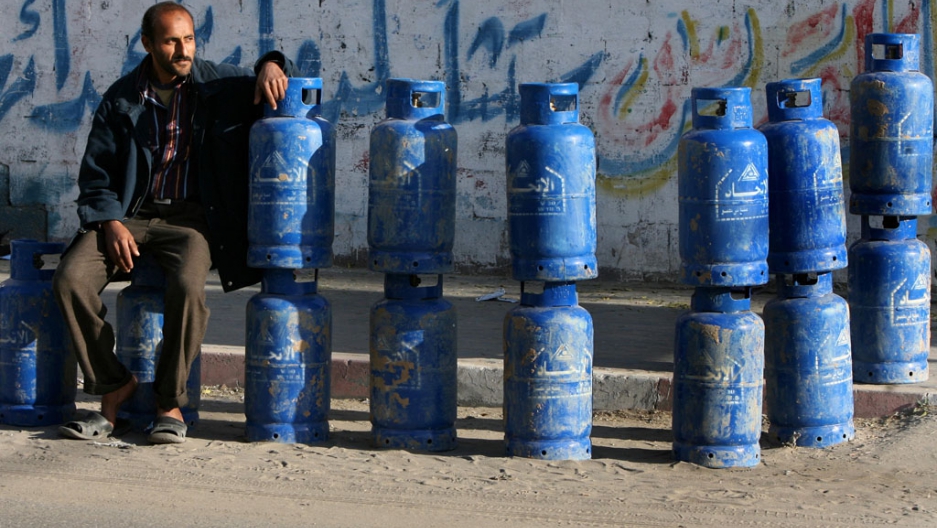 A Palestinian man sits with cylinders of cooking gas, smuggled into the Gaza Strip from Egypt through a tunnel, that he is selling on a street in Gaza city.
Credit: MAHMUD HAMS
Share

The price hike comes two days before the International Monetary Fund delegation arrives in Cairo to talk about a $4.8 billion loan for the country, which is in the midst of a severe economic crisis.

For ordinary Egyptians, cooking gas is probably the most important commodity after bread. Normally sold at vastly reduced rates under a mammoth energy subsidies system, butane cylinders are available to poor Egyptians for as low as $0.73.

But now, with a 60 percent increase for residential use, access to the crucial fuel source may slip further from the hands of poor Egyptians already grappling with rising prices and a depreciating currency.

The government move to raise the price of cooking gas is part of a larger effort to cut down on its massive and largely wasteful subsidies bill in order to close a growing budget deficit and secure the $4.8 billion IMF loan.

Egypt’s foreign currency reserves have tumbled by more than 50 percent since the uprising here two years ago. As a result, the government is struggling to pay for imports, including diesel, which affects the cost of everything that is shipped.

Egyptians rely heavily on cooking gas, more than 50 percent of which is imported from places like Algeria, Libya and Saudi Arabia. It is then bottled inside Egypt, where local industry produces as much as 2 million tons of butane each year.

Shortages in the past have prompted widespread civil unrest, including clashes at distribution centers, the proliferation of a thriving black market, and residents blocking roads or railways in protest.

Even if restructuring Egypt’s subsidies system — to cut-out waste and target the disenfranchised — would eventually benefit the poor, the country’s already fragile political and economic environment means any new price hikes will likely spur further civil strife in the near-term.