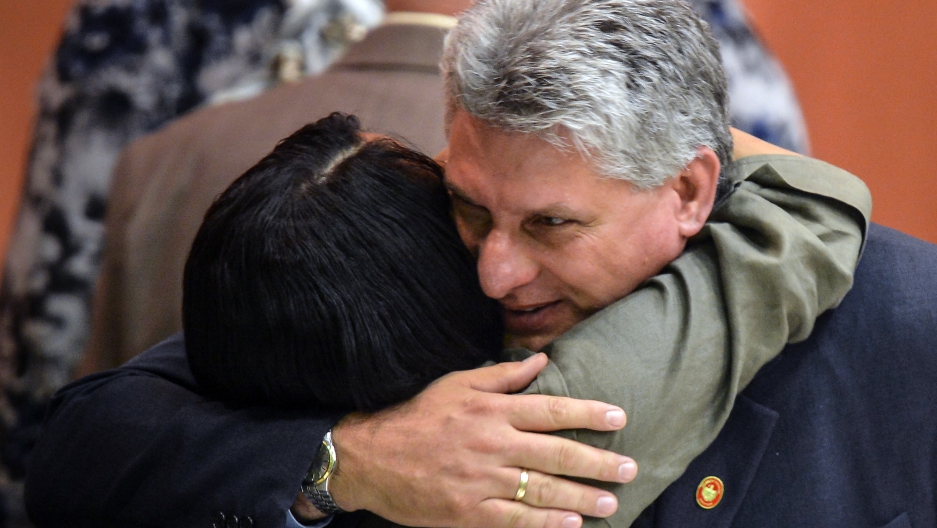 Cuban First Vice President Miguel Diaz-Canel is greeted at the end of the meeting of the new National Assembly to choose a Council of State, on Feb. 24.
Credit: Adalberto Roque
Share

HAVANA, Cuba — There are no elections scheduled any time soon in Cuba, but Miguel Diaz-Canel’s long campaign for president is already in full swing.

His public audition for Cuba’s top job began last month when he was named first vice president, designating him as chosen successor to Raul Castro. Since then, over the course of several carefully choreographed weeks, the island’s aging leaders have lifted him from relative obscurity to become Cuba’s man for all occasions.

It was Diaz-Canel, not Fidel or Raul Castro, who offered Cuba’s first public condolences after Venezuelan President Hugo Chavez’s death earlier this month. When Pope Francis was elected at the Vatican conclave, Diaz-Canel was dispatched to Rome to convey Havana’s congratulations. And when the players from Cuba’s national baseball team returned home with their hats in hand after a fifth-place finish at the World Baseball Classic, Diaz-Canel was there to cheer them up.

The 52-year-old Diaz-Canel’s newfound visibility is a first step by Cuban authorities to prepare the public for a new face at the top. The vast majority of the island’s 11 million citizens was born after the 1959 Revolution, and has never lived under a ruler not named Castro.

Fidel Castro, now 86 and retired, is seldom seen in public anymore. His brother Raul Castro, 81, remains in apparently good health but has announced that his current five-year term as president will be his last. Given his age and his stated desire to hand over power to a younger generation of leaders, there’s no guarantee he will serve until the end of his term in 2018.

That leaves Diaz-Canel a heartbeat away from power, with some very big and unwieldy shoes to fill.

An electrical engineer by training, Diaz-Canel rose through the ranks of Cuba’s Communist Party, serving as the top party official in the provinces of Villa Clara and Holguin. He was appointed minister of higher education in 2009.

If he succeeds Castro, he will inherit the hemisphere’s only one-party political system, a chronically struggling economy and thorny rivalry with the United States and Cuban exiles who will be determined to see him fail.

Among his first tasks will be convincing the Cuban public and powerful figures within the government — especially the military — that he’s a credible and qualified leader.

So it was significant this week that Fidel Castro Diaz Balart, the comandante’s eldest son and a trained nuclear physicist, gave the new vice president an unqualified endorsement in an interview with Russian media, calling him “a young man with experience, technical preparation and charisma.”

It was also a subtle reminder that no younger Castros are in line to take over when Raul steps down.

“I’m sure he will be well-received by the younger generation and the population in general,” said “Fidelito,” himself now 63.

Diaz-Canel is not a hot-blooded firebrand in the mold of Fidel Castro or Hugo Chavez. His reputation is that of a technocratic manager, and he conveys no detectable enthusiasm for the spotlight or political stagecraft. In his job as Communist Party boss in the provinces, he won praise for his down-to-earth manner and competent oversight of millions of dollars worth of tourism investments.

Archival photos show the tall, stockey Diaz-Canel often smiling and wearing his silvery hair a bit long in the back, in the style of a mullet.

Whatever his image, Cuba’s fading “historico” generation is betting that if he can deliver economic growth and successfully downsize Cuba’s bloated bureaucracy, he will be able to forge the kind of political consensus he’ll need to withstand internal and external challenges to his rule.

In comments last week that were reported by Cuba’s state media, Diaz-Canel burnished his image as a reformer, saying that the point of Castro’s ongoing economic liberalization measures has been to eliminate the “prohibitions that have held back productive forces,” and that the island’s private sector should continue to develop “without prejudices.”

He also hinted that deeper and more difficult changes were still ahead.

“We’ve made progress on the issues that are the easiest to solve, that require decisions and actions that are less complex,” he said, “and now what’s left are the more important and complex choices that will be more decisive in the future development of our country.”

Such comments have some opposition activists hoping Diaz-Canel will lead Cuba into a period of perestroika-style changes that would gradually unravel the Castros’ socialist system.

“For now he seems like a figure of continuity, but perhaps it’s a mask of opportunism that has helped him reach a position of power, and once he’s on top he’ll turn out to be another Gorbachev,” said dissident blogger Yoani Sanchez during a recent talk at the Benjamin Cardozo Law School in New York.

Rafael Hernandez, editor of the Cuban journal Temas, said in an interview that Diaz-Canel is just one of several capable, younger leaders now poised to steer the country forward along the path laid out by Raul Castro’s reform agenda.

While Diaz-Canel may not have had an international profile prior to his promotion, Hernandez said he was well known and widely admired by Cubans in the provinces.

“He was known for being accessible to ordinary people,” Hernandez said. “He used to sit down with people in the streets and have a beer.”

“The majority of old bureaucrats in Cuba are not like that,” he said. “But in these new circumstances, in this new context, Cuban politicians must play the role of a politician. They have to get down to the grassroots level and talk to people. That is how Diaz-Canel will build his own political consensus.”