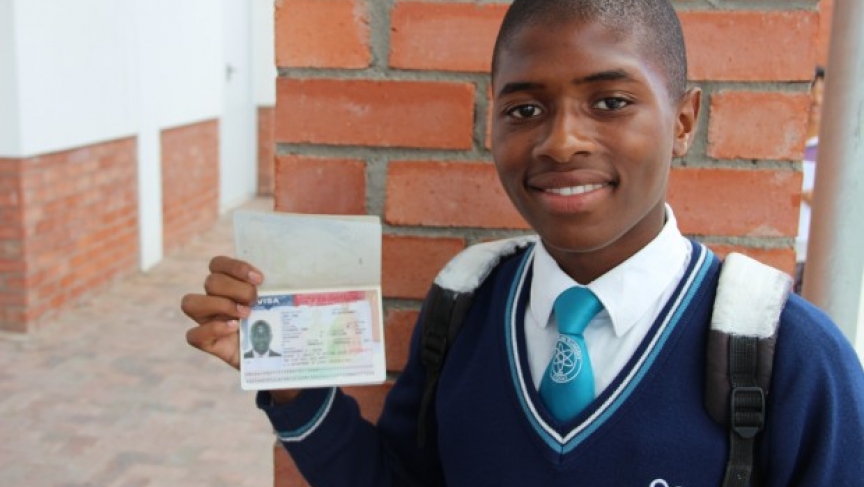 Sive, an eleventh-grader, holds up his US travel visa.

Tomorrow is a big day for Sive. (It’s pronounced “See-vay.”)

His destination? The United States of America.

Sive is known for his leadership at COSAT. He’s one of three juniors on the student council. He’s active with a community-based organization working to prevent gender-based violence in Khayelitsha, and spends many weekends talking to soccer players about the perils of abusing women.

“We target soccer teams rather than schools, because that’s where you can always find the young men – the worst offenders,” he says.

And he always seems to be at school, pitching in. The first time I visited COSAT, he was there, during vacation, assembling desks. He’s just that kind of kid.

Because of these qualities, Sive was one of 10 South African high school students selected for a US State Department leadership program. It involves a week in Washington DC, a week Denver, and a week in –

“I can’t remember the third,” he says. “But I think it is also very cold there.”

At a school assembly yesterday, Sive got a huge round of applause from his peers. He seemed a bit overwhelmed. Afterwards, he had trouble putting his feelings into words.

“I’m feeling…so many things,” he said. “I’m really going to miss my classmates.”

“Are you nervous?” I asked.

That may be the quickest opinion reversal I’ve ever heard.

Sive’s mom suffers from mental illness, and his three older brothers are basically nonexistent. A few weeks ago, he told me that it sometimes feels like he doesn’t have a family.

I’ve gathered that COSAT fills that void. It’s why he spends so much time at the school, and why he’ll be missing his classmates so much.

I ask if he packed some warm clothes.

“Yes, but supposedly they are also giving us something warm,” he says with a smile.