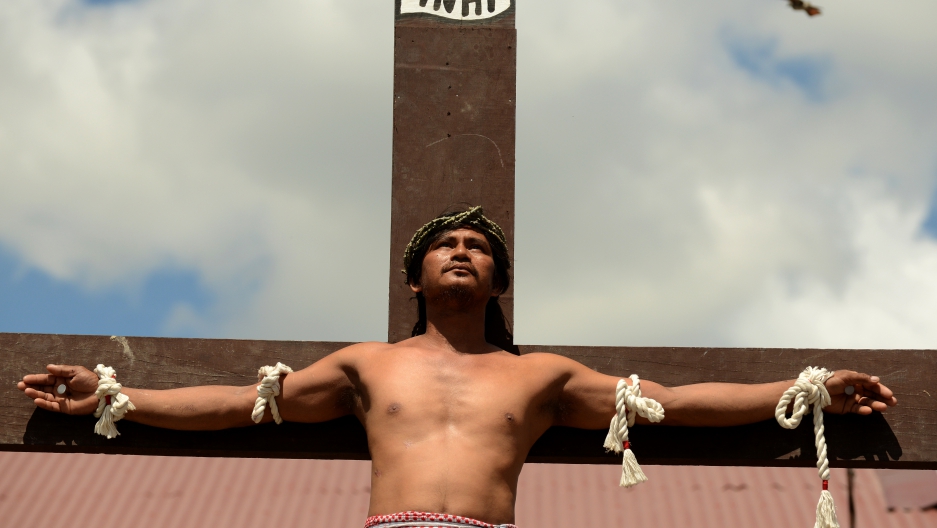 A penintent is nailed to the cross during the reenactment of crucifixion on Good Friday in the village of San Juan, San Fernando City, north of Manila on March 29, 2013.
Credit: NOEL CELIS
Share

In an annual show of devotion to Jesus Christ, at least 16 people in the Philippines have been nailed to crosses during a Good Friday reenactment of the crucifixion.

Each of the penitents spent several minutes on the cross, watched on by thousands of tourists who flocked to the Pampanga region, 50 miles north of the capital, Manila, to witness the spectacle.

Branding it a form of folk religion, the Catholic church had discouraged the ritual in recent years.

Earlier in the day, the men traipsed through villages in Pampanga flagellating themselves with makeshift whips. This year, both men and women carried wooden crosses to dramatize Christ's sacrifice.

The AP described the experience for sign painter Ruben Enaje, 52 — his 27th crucifixion after surviving a fall from a building — in graphic detail:

"Enaje screamed in pain as men dressed as Roman soldiers hammered stainless steel nails into his palms and feet... His cross was raised and he was hanged there for several minutes under the searing afternoon sun before the nails were pulled out and he was taken on a stretcher to a first aid station."

The news service cited Alex Laranang, 58, as saying that he was doing it "for good luck and for my family to be healthy."

Reuters cited Archbishop Paciano Aniceto as saying the practice was a distortion of Christ's teachings.

However, he defended the devotees' right to practise their faith in a ritual that he described as "popular piety."

"We are in no position to suppress them. I do not think it is right to close our doors to them just because they are more attracted to these folk practices than to our Roman liturgy which they may find too foreign or cerebral."