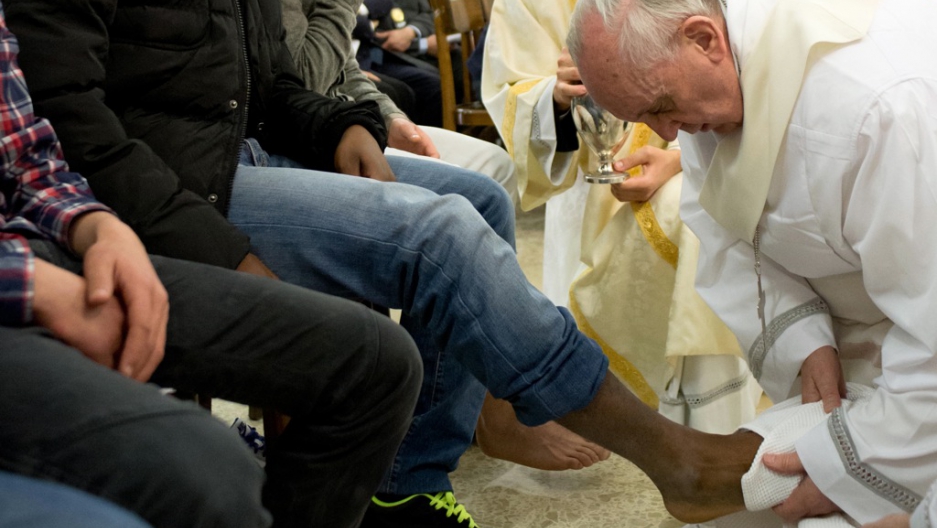 Pope Francis washes the feet of a prisoner at the Casal Del Marmo Youth Detention Centre during the mass of the Lord's Supper on March 28, 2013 in Rome, Italy.
Credit: L'Osservatore Romano
Share

For the first time in history, the pope has washed a woman's feet for Easter.

Pope Francis washed the feet of two women and ten men at a juvenile detention center in Rome on Holy Thursday.

The ritual commemorates Christ's humility in bathing his 12 disciples' feet on the eve of his crucifixion and is a fixture of the Holy Week calendar – but never before has a pope extended it to women.

Doctrine holds that since the disciples were all male, only men should be involved; previous pontiffs have performed the rite in the sanctity of Rome's basilicas, bathing the feet of chosen (male) priests.

Unlike them, Jorge Mario Bergoglio is no stranger to the female foot: as a cardinal in Argentina, he took the ritual to the jails and hospitals of Buenos Aires, and often included women.

For him to do the same as pope, however, is being hailed as something quite remarkable.

More from GlobalPost: Pope Francis I, a voice for the poor

American Jesuit priest James Martin told the Associated Press that it was "hugely significant," a powerful symbol of "the all-embracing love of Christ."

Others speculated that the gesture would be used to argue that Francis was in favor of ordaining women priests (though he has said he is not), while some worried that Francis set "a questionable example" by choosing to disregard liturgical law.

Then again, writes Father Dwight Longenecker, Jesus himself "repeatedly flouted some strict rules for a greater good." Francis may have taken a radical step, but he reminds us of "the unexpected and sometimes upsetting example of the Lord himself – who upset some religious traditions in order to make a point."

The Vatican's spokesman, meanwhile, sought to downplay the gesture's implications.

"Excluding the girls would have been inopportune in light of the simple aim of communicating a message of love to all, in a group that certainly didn't include experts on liturgical rules," Rev. Federico Lombardi told the AP.

The impassioned debate it has provoked, however, suggests that the Pope's act has already resonated far beyond that group.